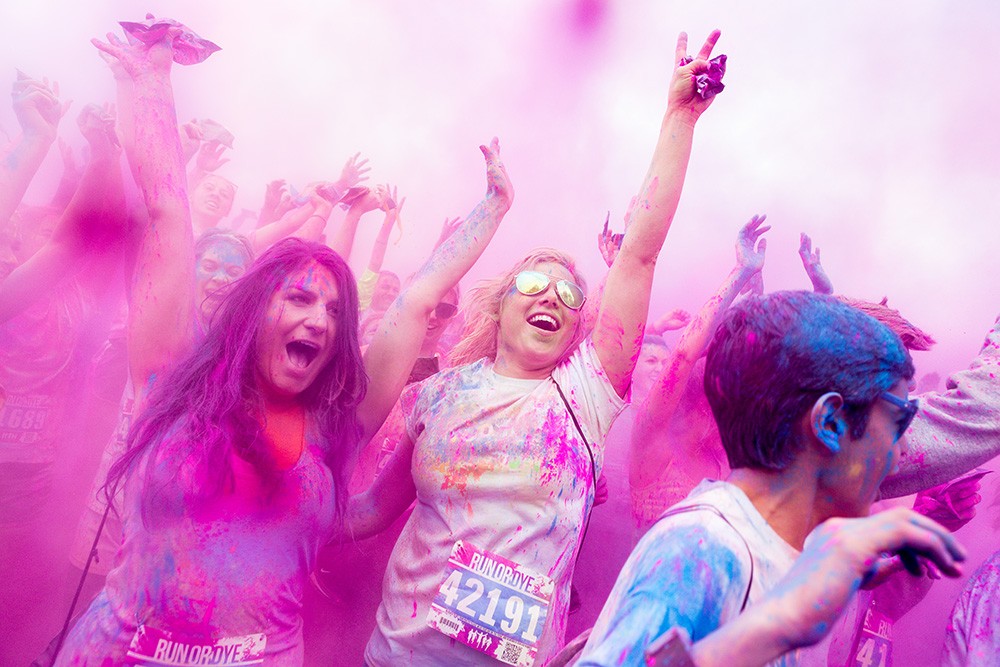 Stephen Schlange
Runners during a dye throw at the post-race party at Run or Dye in Riverside State Park in May.

Off in the distance a haze of neon pink dust rises up like smoke into the ponderosa branches. Closer, a crowd wearing mostly white and combinations of Dayglo neon presses forward, waits for a countdown from five, and then bursts forth toward the pink cloud. Later, as those same runners begin to emerge from the treeline of Riverside State Park near Seven Mile, their faces, clothes, hair and skin are transformed into a tie-dyed rainbow palette.

Themed, non-traditional races like Run or Dye and similar 5K “color runs” are part of a growing national fitness trend that’s estimated to have attracted 4 million participants just last year. That number had grown from the low six-figures in just the past five years, according to Running USA, a nonprofit, distance-running industry tracker. Popularity of alternative 5Ks has increased so much in that time, they’ve now surpassed the number of participants in traditional half-marathon and marathons, combined.

Other types of alternative races in this non-traditional race boom combine color runs’ elements of fun and social interaction with outrageous tests of physical endurance and courage — jumping over fire or crawling under electrified wires — in obstacle and mud runs, like the Warrior Dash, Tough Mudder and the Spartan Race. Some of these more extreme races, which feature obstacles similar to military endurance training courses, have recently been criticized for a lack of safety, resulting in serious injuries and even death. Organizers of those races have responded to media by saying race participants are required to sign waivers of liability, and always have the option to bypass any obstacle on the course.

The Inland Northwest, however, hasn’t yet hosted one of those extreme obstacle races. Here, the popular Dirty Dash, a toned-down version of these mud runs, is set for July 19, and has already sold out all but one of its start times.

That same day, the Kootenai County Fairgrounds hosts the locally organized Muddy Miles, a family-friendly mud run that raises funds for the nonprofit health-care programs at Heritage Health and the Kroc Center.

Runners who share pictures of themselves covered head to toe in dye or globs of mud on social media have helped ignite the trend, Running USA found. Other than the apparent social element, it’s largely the sense of achievement and physical challenge for many first-time 5K runners that’s made these non-traditional races so successful.

About 1,500 people turned out for Run or Dye’s first event hosted in Spokane in early May, including first-time 5K runners Emily Frank and Monika Ide, both 24. The women saw people talking about the event on their Facebook feeds and decided to sign up. The night before the race, they decided to create colorful tutus after seeing some of other participants’ elaborate outfits, from furry leg warmers and neon tights to superhero costumes. Now that the friends have conquered their first 5K together, they say they’re already eager to try a 10K, and maybe even a half-marathon.

“We find that a lot of people who participate are first-time runners,” says Run or Dye’s communications director Katie Langston. “The experience of getting covered in color is so outside your normal, everyday life. People really love it, and they use [their experience] as a goal and inspiration to get fit and to be their best selves.”

The Salt Lake City-based company that organizes the race, Viral Events, held its first color race back in March 2013, and has since hosted more than 150 events across the U.S. and Canada, says Langston. It recently announced a new color race series in the UK, and plans to continue expanding its events across the world.

Run or Dye joins several other color run series in the growing and highly-competitive fun run market, with each trying to stake out its claim in being unique or the “happiest” event of its kind. There’s also the Color Run and Color Me Rad, both of which are hosting races in the Spokane area later this summer. Despite the originality claims, all three are similar in using the same cornstarch powdered dye, being 5Ks, and culminating with rave-esque festivals of club music and blasts of more colored powder into the crowd. All three for-profit series also partner with local charities in each host city to donate a portion of the race proceeds.

Langston says the inspiration for Run or Dye, as well as other color runs, comes from the Holi Festival in India, a Hindu spring celebration dating back thousands of years that’s recently been embraced in non-Hindu cultures for its message of spreading love — and color.

“I think there is something profoundly moving about that,” she says. “You embrace the present moment, and the color is a symbol to throw away bad feelings and ‘live life in full color.’” ♦