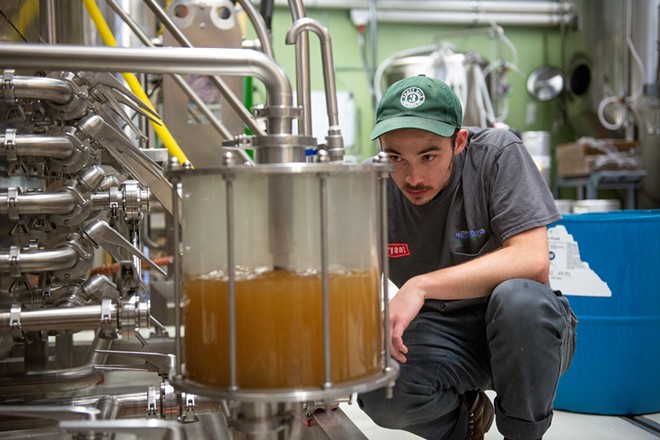 Sean Owens likes to say he has a lot of "lofty goals" for Common Language Brewing Company. Beyond being a typical gathering place, Owens wants the brewery to be a leader in supporting marginalized and underrepresented groups in the region.

One way he plans to accomplish this goal: give away a portion of its profits.

"At the end of the year, we're committed to giving 20 to 25 percent of our profits to organizations in town that support LGBTQIA, BIPOC, women and children," he says. "Sort of unmet needs for people in the community."

Owens, a retired veterinarian and professor, is president and one of six owners of Common Language. The new downtown Spokane brewery is located inside the Chronicle Building, neighboring the Fox Theater and Knitting Factory. Owned by The Spokesman-Review's Cowles family, it was once home to the printing presses of the Spokane Daily Chronicle.

Owens' original post-retirement plans didn't include opening a brewery. The idea came about after his wife, Dori Borjesson, received an offer to be the dean of the College of Veterinary Medicine at Washington State University. With a move to Pullman on the way, he started looking at the next phase.

"My buddy (Jeremy Johnson, co-owner and treasurer) and I were sitting down and said, 'Why don't we start a brewery?'" Owens recalls. "Give profits away and use it as a training ground for people early in their career, people who are underrepresented in the industry."

The conversation prompted Owens, a longtime homebrewer, to attend the Master Brewers Certificate Program at University of California, Davis. He then landed an internship at Three Mile Brewing Co. in Davis and met Charlie Thudium.

"Charlie basically taught me everything I know about commercial brewing," Owens says.

Thudium, now co-owner and head brewer of Common Language, is a recent graduate from the UC Davis Food Science and Technology program, with an emphasis in brewing science. His Scottish export style ale won the school's 2020 Iron Brew competition. Before moving to Spokane, he was the lead brewer at Three Mile for almost a year.

"For me, it's just about brewing the stuff that I like," says Thudium. "Kolsch and Czech Pilsner are my absolute favorite beers."

Owens and Thudium are just two members of a quickly growing team.

Co-owner Dallas Hobbs, a former Washington State University football defensive lineman, works as the brewery's director of marketing and design. He creates its can labels and has led their early philanthropic efforts — his first event was a pint night with the Women Helping Women Fund during which one dollar of each beer sold went to the nonprofit. Taproom manager Gary Hughes also has plans to add a trivia night, mug club, more live music and to host food trucks on the weekends. 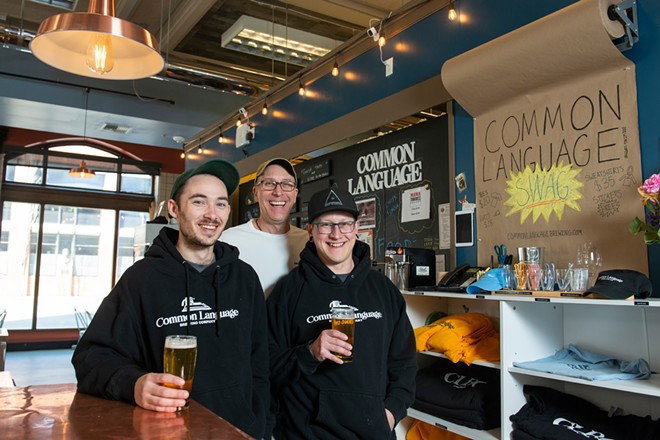 After more than a year in the making, Common Language finally opened its doors in April. The walls of the vibrant taproom are painted in an array of blue, orange and green. Copper light fixtures hang over a copper bartop. The standard taproom tables and chairs are bordered by two seating areas that consist of four vintage-style chairs circling a coffee table.

What guests may not see when they first walk in is the well-equipped brewing space. The 10-barrel brewhouse is joined by four 10-barrel fermenters and one 20-barrel fermenter. Between tanks sits a small canning line. A lab area in the back is filled with gadgets to calculate alcohol percentages, hop bitterness, pH levels and more. Next to that is a reverse osmosis water system designed by co-owner Chris Durrant.

"I wanted to give Charlie, and whoever he finds as assistant brewer, all the tools to make the best beer," says Owens.

The brewery debuted with five of its own beers and a hard seltzer on tap. Owners kept the tap list pretty well-rounded with an Irish stout (modeled after Guinness Extra), brown ale, West Coast double IPA, hazy IPA and the newish-style cold IPA — it's similar to a West Coast IPA but fermented with lager yeast at cooler temperatures. We Be Lymin, Common Language's first go at a hard seltzer, is made with ginger and lime and served with a maraschino cherry.

The taproom also hosts a few guest spots — first up were a couple offerings from Hunga Dunga Brewing Company in Moscow — plus local cider and wines from Liberty Ciderworks and Chronicle building neighbor Terra Blanca Winery.

For several weeks, Thudium was unable to crank out additional beer due to some hiccups on the production side of things. The brewery is back up and running now, though, and have a few new brews in the works. Up next is a kolsch, New England IPA and a raspberry hard seltzer.

As for the origins of Common Language's name, Owens says it's a reference to the fact people have been gathering around beer for thousands of years.

"Beer is a common language," he says.

His idea was to create a space where people can play music, meet new (or old) friends and debate over trending topics. He wants to be a hub for the community.

"We've got a lot of lofty goals. I found that everyone always says you shouldn't have these lofty goals, but I think by throwing these passions out there in the world, people hold you to it." ♦