These three local businesses give back on a regular basis 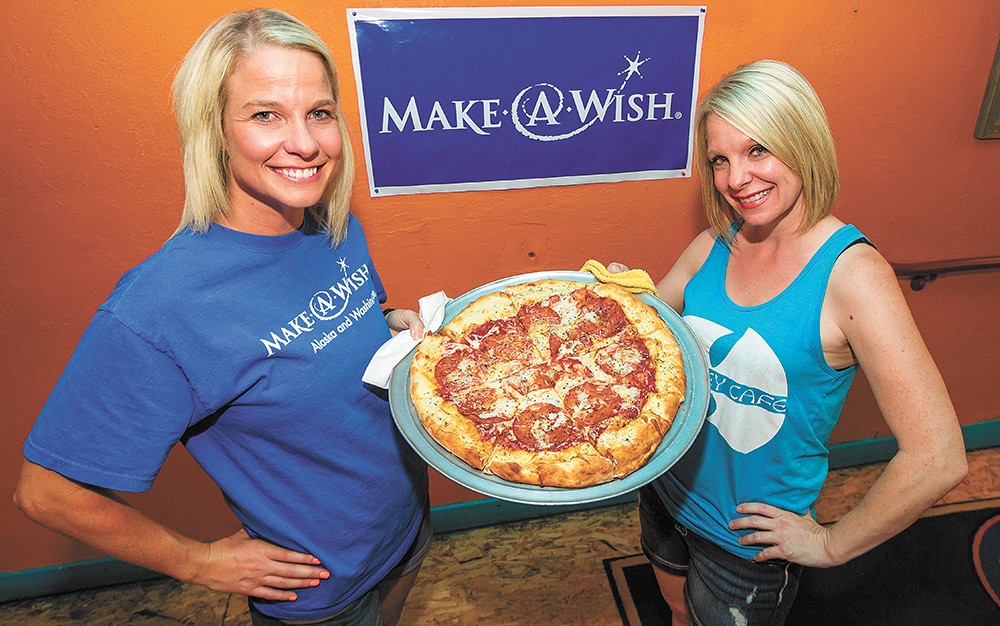 What? Once a month, Monterey Café hosts Give Back Wednesdays, a night dedicated entirely to one local nonprofit. The restaurant/bar whips up some grub and hosts a silent auction featuring gift baskets jammed with goodies donated by other local businesses; 100 percent of the proceeds from the food and auction go to a new beneficiary each month. Last week, they celebrated the Spokane chapter of the Make a Wish Foundation and raised $2,000. The charities and dates change every month, so call ahead to find out when the next Give Back Wednesday is happening.

Why? Hometown boy Ray Wilson, who opened Monterey Café in 2008, wants to give back to the community that gave him so much. Wilson initially started hosting Give Back Wednesdays once a week, donating a percentage of the proceeds from that evening to a different charity or nonprofit. Recently, he switched to once a month, and now donates the entirety of the proceeds from the food and money raised from silent auctions.

How much? Before switching to once-a-month charity nights, the restaurant consistently raised several hundred dollars a week. The switch to donating all the food and silent auction proceeds brought in $3,800 for Heath's Haven, an Idaho dog rescue organization, in July.

What? Does your dog get cold in the winter? Kathlene Powell's got 'em covered. The owner of Max's Custom Pet Clothing carries name-brand pet clothing (the equivalent of Nike for humans, Powell asserts) and makes about half of the garments she sells herself. She's made everything from coats and overalls to wedding dresses, diapers and sweaters. She donates to a local shelter or nonprofit animal organization each month in the form of cat towers, clothes, treats and food.

Why? Powell served more than 20 years in the military; during her final deployment to Iraq before she was to retire, a vehicle she was driving ran over an IED. When she got home, she had no motivation to do anything but lay around the house until some friends gave her a tiny dog named Roxie. The malnourished 6-pound Chihuahua, pug and miniature Pinscher mix was rescued from a puppy mill and had a broken tail and a hernia. She shivered constantly, so Powell started making her clothes — a project that eventually drew her to craft shows where other people bought the pet clothes she made. Now she will sew custom clothes for just about any animal.

"That dog got me off my butt," she says. "Otherwise I don't know what I'd be doing."

How much? Since she opened six years ago, Powell estimates that each month she's donated about $500 worth of food, treats, clothes or toys to animal shelters and other animal nonprofits in the area.

What? The inside of the recently opened drink-and-paint joint on North Division is aptly decorated, with paintings of trippy owls, colorful landscapes and a mellow-looking cello, mostly created by the owner and local artist Hepherson Riggins. Sip'n Paint Studio, open since this past February, is dedicated to donating a portion of every class fee to a local nonprofit. These donations add up to about 8 percent of the total proceeds each month.

Why? Riggins got his philanthropic motivation from his parents, who were always heavily involved in charitable work. His dad, Rig Riggins, is the former CEO and president of the Spokane YMCA, and his mother was on the board of the Spokane chapter of Big Brothers Big Sisters.

"I was always raised with a nonprofit side," he says. "I've been able to witness firsthand the things that those organizations have done for the community."

How much? Riggins says he's donated a couple of thousand dollars to local nonprofits so far, some of which include Cancer Can't, the Autism Society of Washington and the YMCA. ♦