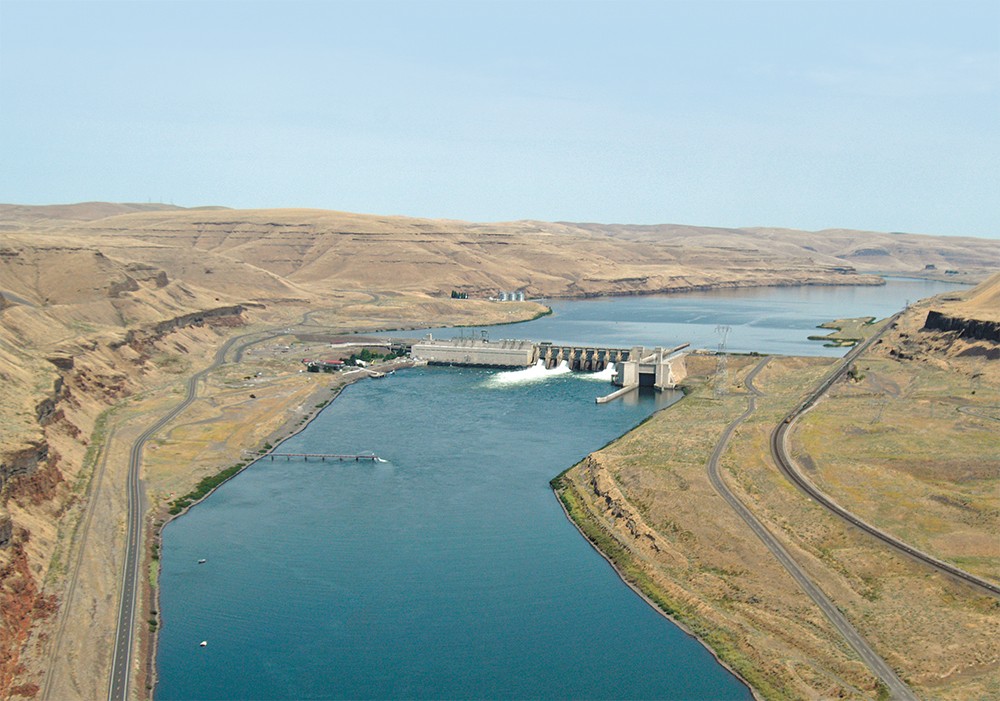 Depending on who you ask, a bill introduced in Congress

last week will either save dams and ensure affordable electricity for the Pacific Northwest for generations to come, or is a "death warrant" for the remaining endangered salmon species that still return to the Snake River.

The legislation, introduced by Rep. Cathy McMorris Rodgers and a bipartisan coalition of representatives from Washington and Oregon, would essentially subvert a March ruling by U.S. District Court Judge Michael Simon. He ordered the Army Corps of Engineers and other agencies to look at spilling more water over eight dams along the Snake and Columbia rivers to help move more juvenile salmon out to sea, starting in 2018.

Last May, the same court rejected a 2014 plan put together by federal agencies to protect salmon and steelhead trout while operating the dams. As part of that decision, Simon ordered the government to study ways to restore the fish runs through a full environmental review, which could include examining whether the government should breach or remove the four Lower Snake River dams — Ice Harbor, Lower Monumental, Little Goose and Lower Granite.

But the new legislation would require an act of Congress before agencies could study breaching the dams, or take any action that would restrict electrical generation on the Federal Columbia River Power System or limit navigation on the Snake River.

If this story is starting to sound familiar, it's because this isn't the first time a Washington state member of Congress has tried to prevent dam removal from being studied — former Sen. Slade Gorton tried to do so back in 2000.

McMorris Rodgers says she thinks that after the "unprecedented collaboration" the Obama administration undertook to work with area tribes, state groups and other stakeholders, it's time to put the 2014 plan in place and move forward. The current bill would do just that, relying on the plan, known as a biological opinion, until 2022 or later.

"I think it's important to consider the biological opinion was done in a very collaborative way along with the tribes, public power, the users of the system. ... I hope we can respect the work they've done and move forward," McMorris Rodgers said in a phone call on Monday, July 10. "My concern is you have a judge, one person, that is issuing their own opinion without really respecting the broad collaborative work that has been done for many years."

Environmental groups such as Idaho Rivers United disagree, and argue that the bill would be a way to get around existing environmental protections.

"These five members of Congress have written a death warrant for endangered salmon," IRU Executive Director Kevin Lewis says in a news release. "This bill must be stopped dead in its tracks."

Eric Prado
Bonneville Dam is the last of eight dams that Snake River salmon pass on their way to sea.

JOURNEY TO THE SEA

It used to be that salmon would hatch in the high, cool mountain waters of Idaho, then as the snow melted, the rushing river water would push the juveniles down the Snake, which spills into the Columbia, and they'd make it out to sea in just a few weeks, explains Bill Arthur, who worked for the past third of a century with the Washington chapter of the Sierra Club.

Now eight dams, installed between 1937 and 1975, have slowed the rivers so the journey takes six weeks or more, said Rick Williams in a June 13 U.S. Forest Service webinar on science-based fish recovery. Williams is a College of Idaho research associate who has studied native trout and salmon for more than 30 years.

The salmon morph en route, from freshwater fish to saltwater, in preparation to live in the ocean for a few years, before they swim mightily back upstream to spawn and die. They must cross the same eight dams to get back.

In the 1880s, it's estimated that 1.5 million chinook salmon made it back to the Snake River basin and into Idaho, Williams says in the webinar. In 1995, the worst year on record, only 1,167 made it back.

Around that time, the salmon species that were once bountiful started getting listed as endangered, and groups such as Save Our Wild Salmon formed.

The coalition of conservation groups, sport fishers, businesses and river groups decided to support removal of the four lower Snake River dams in the late '90s after looking at the science and deciding "that this is what our fish really needed if we were actually going to restore them," explains Inland Northwest Save Our Wild Salmon Director Sam Mace.

"So many people across political spectrums and interests care about salmon and rivers," she says. "Republicans and Democrats like to spend time on the rivers here and catch fish. They don't want to lose that resource. You just can't underestimate the economic benefit."

Some added spill — water that is released over the dam without passing through turbines — has been used to help juvenile salmon over the dams in recent years. But the Bonneville Power Administration questions whether adding even more spill next year might have adverse "biological, physical and/or structural" consequences on the fish, and the federal power and transmission system.

"We've done a lot of spill already. It's questionable as to the impact that it has, even on the fish," McMorris Rodgers says. "But we know it costs us hydro generation."

And protecting that electrical generation is something she's focused on, also introducing legislation in June that would reduce the amount of time it takes to renew licenses for dams and categorize hydropower as a source of renewable energy.

Aside from producing electricity, the lower Snake River dams allow for barging along the river. While some argue it's an important transportation method for agriculture, analysis of public data shows that shipping of all types on the river has dropped dramatically over the past decade.

"The real takeaway here is really, this bill isn't good for anybody on any side of this issue. It just kicks the can down the road, and means our region is going to be living with uncertainty on the future of our salmon and the future of our dams for several more years," Mace says.

If salmon don't start returning, the dams are going to remain on the table for possible removal, she says.

"By having this problem not solved, it creates uncertainty not only from the salmon side, but from the farmers and shippers that do rely on the dams today," Mace says. "It's hard to know where to invest your transportation dollar if you don't know if those dams are going to stay or go."

This year's return for chinook isn't looking good. By July 9, 157,684 adult Snake River chinook salmon had made it over the Bonneville Dam, according to Idaho Fish and Game. Of that number, 34,013 made it over the Lower Granite, the final hurdle before the fish return to Idaho. That's about half the number to return by this time last year, and about 44 percent of the five-year average. Expectations for this year's steelhead run are also bleak.

Salmon are resilient to change, and are designed to lose most of their population along the journey out to sea and back, says Greg Stahl, spokesman for Idaho Rivers United.

"You think about salmon historically, they're designed for a huge percentage to get eaten by sharks and other fish, and die along the way," Stahl says. "You need between about a 2 and 6 percent survival rate for the species to sustain or grow, and below that, their populations are slipping."

To environmental groups, that shows that even with improved fish ladders and efforts to keep reservoirs at cooler temperatures, there is more to be done.

"There are genuine issues that need to be looked at, evaluated and addressed," says Arthur, who has returned to his roots as a volunteer with the Sierra Club. "That's why it's important we have a full, fair environmental impact statement process. In the interim, we need more help for salmon to make sure we don't lose them." ♦