Bangers and Mash: Deconstructing the Dish 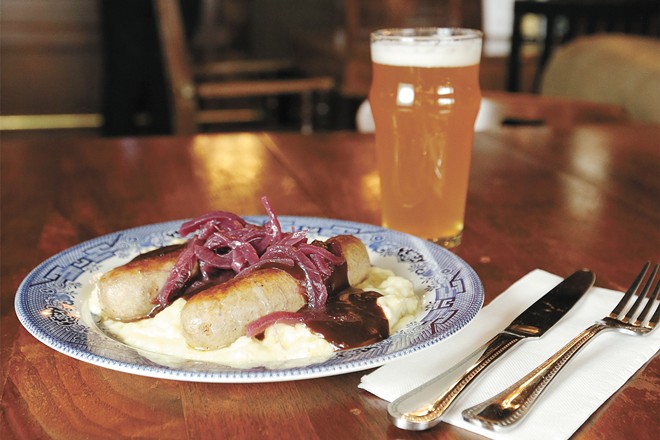 Ben Drake’s recipes are built on years of experience making his own sausages.

angers are quintessential British pub food, but the bangers at the Crown and Thistle Pub are world travelers.


The two-year-old Coeur d’Alene pub’s eclectic menu of house-made bangers — or sausages — are all the careful creation of its co-owner and resident wurstmeister Ben Drake.

“Not only is it a delicious pub classic, but we knew that it would also greatly appeal to the people of this area,” says co-owner Jennifer Drake, Ben’s wife.

“And since sausage-making is a passion of Ben’s, it was the perfect opportunity to combine my love for pubs with his love for sausages.”

During the Great Dine Out, the Crown and Thistle is showcasing its classic bangers and mash (sausage and potatoes, that is) for $13. Customers have the choice of two house-made sausages from its rotating menu, served with mashed potatoes, brown gravy and onion marmalade.

“While bangers and mash is a common British dish, our bangers are inspired from cuisines all over the world,” Drake says. “I lived in Scotland, so I have the British component locked down; and Ben lived in Germany, so he’s always had a great appreciation for meat in tube form. From there, the flavor possibilities are endless.”

Drake says some customer favorites from Ben’s bangers repertoire include the Pamplona, a Spanish-style chorizo; the Sosiji, a Korean-inspired pork sausage with gochujang; and the German Apfelbrat, consisting of pork with green apples and green onions. A recent and already popular introduction is the “Bangcock,” a chicken sausage seasoned with Thai red curry, cilantro and red bell pepper.

“There are always at least four bangers to choose from, and they are constantly rotating, so the variety is endless,” Drake adds.

Ben Drake’s recipes for each sausage served at the pub are wholly original, and built on years of experience making his own sausages, a hobby that began long before the couple realized their dream to open the Crown and Thistle in downtown Coeur d’Alene.

“What started out as small batches quickly escalated, and Ben became known for his sausages, all our own recipes, handmade, with quality ingredients and no preservatives,” Jennifer Drake says. “Ben is now jokingly referred to as ‘The Sausage King of Coeur d’Alene!’ He has more than 50 distinct recipes and still makes them all by hand.”

With its centuries-past inspired decor and atmosphere that makes diners feel as if they’ve been transported across the pond to a cozy London watering hole, the Crown and Thistle emulates the vibe of dozens of historic British and Scottish pubs the Drakes have visited.

The couple hope that by showcasing their take on bangers and mash during the Great Dine Out they can introduce more local diners to the British classic, among the many other traditional pub eats on the menu, from crispy fish and chips to hearty pot pies.

Speaking of Deconstructing The Dish

The Great Dine Out kicks off during a warm spring weekend, with a lasting recovery in sight for the hospitality industry Sponsored