The Miracle Worker is about overcoming disabilities with determination. It's about Patty Duke's life, too.

She played Helen Keller while suffering from her own disability. She played Annie Sullivan while displaying her own kind of determination.

Now she’s directing The Miracle Worker and drawing on both halves of her complicated personality: the lows and the highs, the give-up defeatism and the never-say-die determination.

Patty Duke is directing an overview of her own life. She’s directing it in Spokane because of her friendship with Interplayers Artistic Director Reed McColm, who’s known her since 2003, when they appeared together in Gypsy at Spokane Civic Theatre.

“She was initially reluctant to take on a project that had both haunted and daunted her throughout her life,” McColm says. “I think the specter of Arthur Penn [director of both the Broadway play and the movie back in 1959-62] worried her. But it turns out that Patty Duke as a director is damn good.”

But Duke was 12 when she first appeared in The Miracle Worker; she’s 64 now. And a lot has happened in between, as Duke’s 1987 autobiography, Call Me Anna, recounts: alcoholic father, depressive mother, abusive guardians, booze and pills, multiple marriages, the revelation of her bipolar disorder, the long afterlife of the child star.

Where Helen Keller developed a rage to communicate, Duke was often just full of rage. But as a director, McColm says, Duke “had no ambition to be a bully, like some of the directors she has been exposed to. She has such insights, having played both major roles — she knows how to get into an actor’s skin, how to slip into an actor’s persona so well. And she will pre-anticipate some moments, if that’s not redundant: In rehearsal, she’ll say to the actors, ‘You’re going to feel like this in a moment ... well, don’t.’”

Performing the show without hindsight, after all, is important: In the 1880s, nobody knew that this little Helen Keller girl was going to grow up to become world-famous.

“And when [Duke] is directing,” McColm continues, “she’s not often up in the seats, watching — she’s down onstage, working with the actors. Because now she realizes: She’s the storyteller, not one of the characters.”

Duke says that she has been “taken aback and refreshed” by “the energy of a youthful company. I think Sarah Denison’s Annie Sullivan will have a very real impact on this community,” Duke says. “Watching her, sometimes I just go, ‘... Yeah.’” As for Sophia Caruso, who’s playing Helen, Duke says, “Sometimes she’s just 9 years old — she gets distracted. And I tell her, ‘You can’t be distracted until the play is over. But she’s willing to do whatever I ask of her, and she now claims that the fight scene is her favorite.” (That would be the food-fight-withhair-pulling scene that resembles an Annie-versus-Helen game of tackle football.)

Disability and mania, depression and determination — opposing forces have run through Duke’s life, ever since the days when Sidney Sheldon (yes, later a bestselling novelist in the ‘80s) was brought to L.A. to create the pilot for The Patty Duke Show (yes, the one about identical cousins). Nobody had an idea for the show’s premise. But as Duke recounts in Call Me Anna, “Sidney based the series on the me he got to know in those few days: He felt I was schizoid and that’s how he came up with the concept. There was the perky me and the corporate executive me and rarely the twain shall meet.”

For years, McColm has been urging Duke to direct this other show about twins — both disabled, both very determined. As he tells it, “All those theater people in New York are saying, “Patty Duke directing The Miracle Worker — why didn’t we think of that?” At which point Duke sticks her head back in the office and blares out:“HA! HA! HA!” And then she leaves for rehearsal, laughing along the way.

You see, the last two times she was involved with The Miracle Worker, all she did was win an Oscar and an Emmy.

Now in Spokane — with opening-weekend tickets scarce, several shows already sold out, and the run extended for at least a week — Patty Duke is working toward another prize: directing both sides of herself, and seeing herself whole.

Event: The Miracle Worker At the Spokane Civic Theatre through May 21 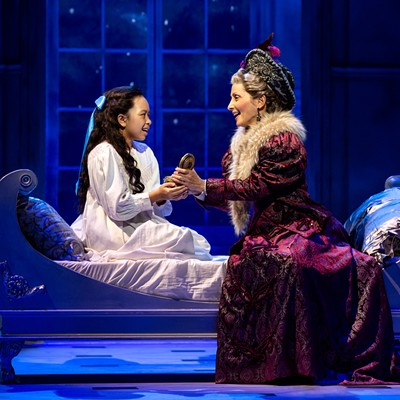