Did activists push the city of Spokane to establish warming shelters sooner — or impede efforts? 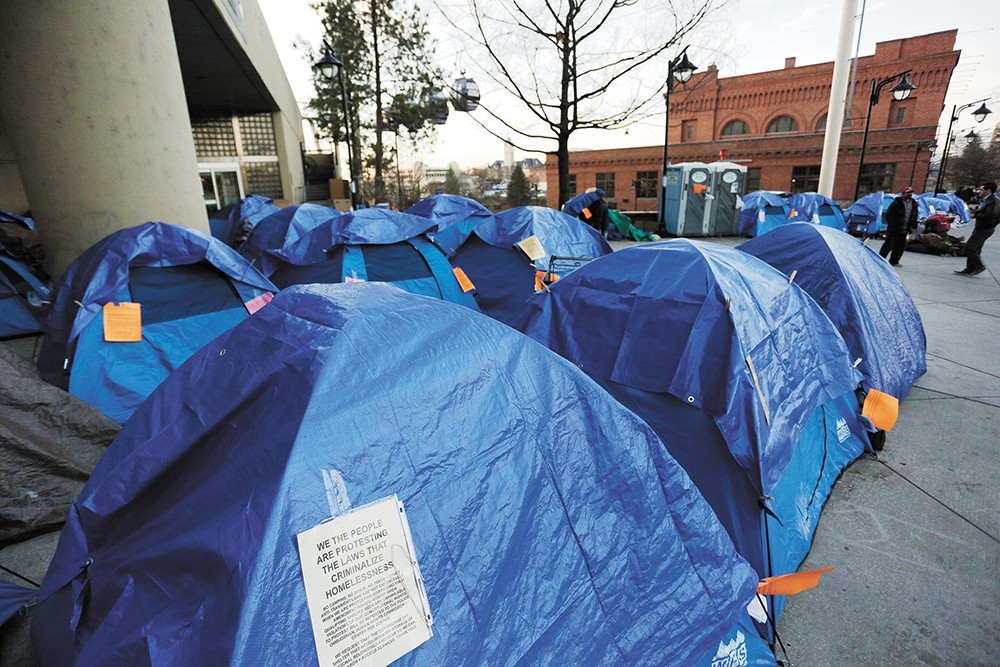 At once, the scene Saturday afternoon summarized the tension and contradictions of downtown Spokane. Couples were taking selfies beside the snowflake props outside the River Park Square shopping mall. Skaters were pirouetting at Riverfront Park's recently reopened ice ribbon.

And across from this, homeless rights activists — including City Councilwoman Kate Burke — had chained themselves in front of City Hall, brandishing pictures of Mayor David Condon Photoshopped as the Grinch as they waited for police to try to evict the residents of the "Camp Hope" homeless encampment.

It's possible that this confrontation could have been avoided. The city knew way back in June that the House of Charity homeless shelter would be dramatically slashing the number of available sleeping spots for single men. But it's taken until December, nearly half a year, for new shelter spaces to be established.

That delay is a failure that's horrified everyone — including tent-city residents, protesters, businesses, council members, social service workers and city staffers. It's the kind of failure that has put lives at risk.

So what happened? One narrative has gone like this: The city of Spokane started looking for replacement shelters far too late, and it was only after activists lit a "fire under their asses" that the city truly rushed to find the new locations.

"The real reason is they sat on their thumbs and waited all this time to do what they were supposed to do," activist Alfredo LLamedo says.

But on Friday, seven floors above the blue tents, the city's Neighborhood and Business Services Director Dawn Kinder told the Inlander a different story. She says city staffers had been working hard the entire time and that the conduct of the activists, however well-intentioned, actually impeded efforts to find new shelters by sowing confusion and scaring away potential partners.

"I understand the protest they believe they're making outside," Kinder says. "However, the encampment that has been created? We've lost warming center sites since that camp came into place."

THE END OF "ENDING HOMELESSNESS"

In a way, this summer marked a defeat in Spokane's grand experiment to end homelessness. Starting in 2016, the city had brought together a network of agencies to provide shelter for any homeless man or woman who needed it, 24 hours a day, seven days a week. Combined with a slew of new apartment complexes for the chronically homeless, officials and housing providers hoped that they'd be able to chip away at homelessness, bit by bit.

"This wasn't a baton handoff. This was trying to hand off an aircraft carrier."

But the problems started quickly. The city had wanted Spokane Valley and Spokane County to help fund the effort. They didn't. And the sheer number of homeless men and women seeking shelter far outstripped expectations.

"The House of Charity was built to sleep 109 men only. In the last four months we were sleeping close to 400 [people]," says Rob McCann, executive director of Catholic Charities. "The front of the House of Charity looked like a scene out of Woodstock."

Nearby businesses were furious about the impact — citing vandalism, urine, human feces, threatened customers. Homeless citizens frequently showed up to City Council meetings and explained that they didn't feel safe at the shelter.

This spring, Catholic Charities requested a substantial increase in shelter funding from the city to hire new police officers and janitorial staffers until July 2019, when the city planned to open a major new homeless shelter. But while the city had ratcheted up the House of Charity funding in 2017, it declined this time.

On May 23, McCann says, Catholic Charities was formally told the city would not be giving House of Charity 24/7 shelter funding past Sept. 1. If the city was to spend more money, Kinder says, it wanted to get more shelter space out of it.

But there was an inherent risk: The city didn't have any replacement shelters lined up. And they weren't easy to find.

"This wasn't a baton handoff," McCann says. "This was trying to hand off an aircraft carrier."

Throughout the summer, Councilwoman Lori Kinnear says, council members quickly became frustrated with the lack of communication for how the city would accommodate the 150 newly unsheltered homeless men.

She wasn't alone: On Aug. 20, Councilwoman Burke sent a letter to Mayor Condon excoriating him and his administration for its lack of preparation.

"This is a huge mistake to take away shelter spaces for over 100+ folks and NOT have a plan implemented in the place of that," Burke wrote to the mayor.

That same day, Kelly Keenan, director of the city's Community, Housing and Human Services Department, presented the outlines of a plan to the council, explaining that the city would soon put out bids to agencies willing to operate temporary warming centers, but that the design was "still in development."

For several council members, that was already too late.

"People are suffering and will suffer more," Councilman Breean Beggs said at the next council meeting. "People will die, likely."

The fact that it took until September for the city to put out the call for warming centers left Beggs wondering if the city administration was intentionally stalling because of budgetary concerns.

But Kinder says the city wasn't twiddling its thumbs. July, she says, was spent trying to finalize the city's plan with Catholic Charities. August was spent gauging which nonprofits might be interested in helping, and what they needed. And while Kinder herself was on maternity leave from mid-August to November, she says the city had "staff working 60 and 80-hour weeks trying to get the ball rolling" since September.

But that ball rolled up against one roadblock after another.

On Sept. 18, the city held an information session for potential warming center operators. But instead of a bevy of interested social agencies, Kinder says, city staffers were greeted at the session by activists like Tom Robinson, who chided the department for delaying so long.

"Who do you expect to not only provide the facility, but to provide the trained staff in such a short time?" Robinson recalls asking them.

Kinder says that the heated meeting actually sabotaged the delicate process of reaching out to nonprofits to create new shelters.

"Our nonprofits want to help, but they also don't want to be caught up in politics," Kinder says.

With social service agencies wary, Kinder says the city changed its strategy, reaching out to agencies one-on-one. But by October, only three agencies had responded — including the Guardians Foundation, a nonprofit that helps homeless veterans — and none of them were offering facilities to be used as a shelter.

"The optics from the House of Charity make a landlord think twice about, 'Why would I want to be a part of this?'" speculates Guardians Foundation founder Mike Shaw.

Even when the city thought it had enough shelters lined up in November, the city's fire marshals inadvertently undermined its efforts by going out to inspect several sites independently.

"It scared some of our partners," Kinder says.

Kinder says that many of the efforts, either by the council or other departments, often ended up backfiring while sending mixed messages. She says that the city's Human Services Department will likely play its cards even closer in the future, despite council frustrations.

"We sometimes end up with too many cooks in the kitchen and miscommunications happen," says Kinder, who will be leaving the city at the end of the month to take a job with Catholic Charities.

Into this environment came activist Alfredo LLamedo. The City Council knows LLamedo well: This summer, Council President Ben Stuckart gaveled a meeting to a close early after LLamedo repeatedly accused the council members of being full of "bullshit, bullshit, bullshit," while not caring about the homeless.

Beginning on Nov. 12, with the lack of shelter space in mind, LLamedo staged a hunger strike outside City Hall, refusing to leave until the city suspended the sit-lie ordinance that mostly banned people from sitting or lying on downtown sidewalks.

A week later, the council agreed to temporarily suspend the law until shelter space opened, but by then LLamedo had been joined by homeless campers. A one-man hunger strike had begun to evolve into Camp Hope, complete with big donated blue tents.

Kinder says that some nonprofits they'd been working with simply stopped responding once the tent city cropped up.

At the City Hall protest on Saturday, I start to ask LLamedo about Kinder's claim that the activism had impeded efforts to open new shelters, but I'm interrupted by Councilwoman Burke.

"Lies!" Burke says. "I don't understand what a protest would do for warming shelters."

Burke and LLamedo continue to argue that the city failed to seize upon available opportunities, like tapping into local community centers, in a timely manner.

Either way, in the last few weeks, the city managed to cobble together a coalition of new partners — like Salem Lutheran and the Guardian Foundation — and old ones. The Salvation Army even agreed to help out with staffing. By Dec. 7, the city had opened 100 new warming shelter spaces, with the possibility of 140 on the way.

Camp Hope finally came to an end Sunday morning, when the Spokane Police officially evicted the remaining campers, and LLamedo and another activist were arrested.

"BULLSHIT!" LLamedo yells before being escorted out. "You people suck." ♦

The original print version of this article was headlined "Shelter Delayed"