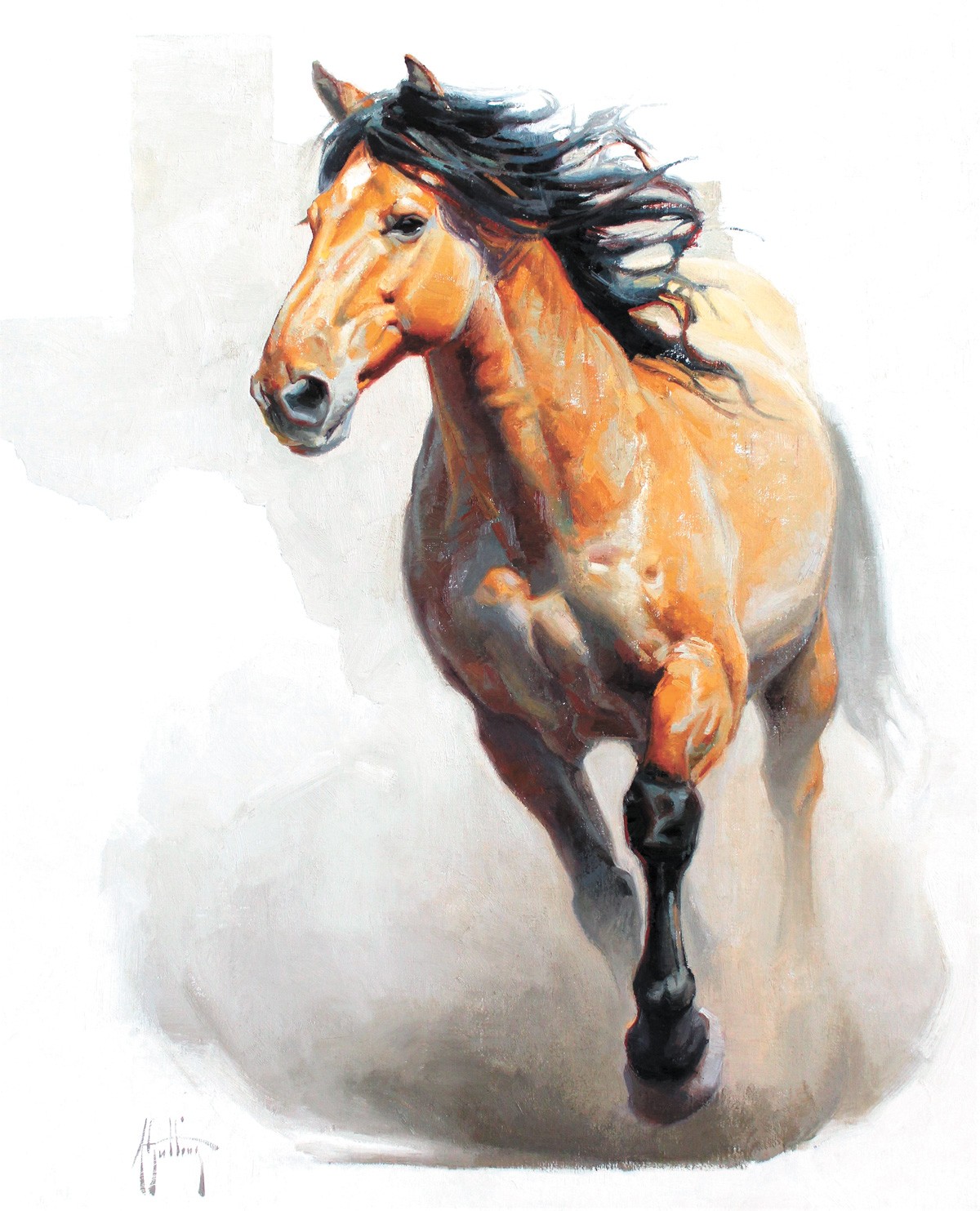 Abigail Gutting's Best of the West

Think Western art and you think cowboys on horseback amidst landscapes of big sky, endless grasslands and the grandest of mountain ranges. Native Americans as they were, pre-westward expansion and conquest. And hardscrabble scenes from cattle ranching and prospecting of humans — mostly men — braving the elements.

"The [Western] genre focuses on the history of the United States and its movement west from Lewis & Clark to the construction of the railroads and the overall migration of Americans seeking hope, opportunity and a better life created by their own hard work," says Buddy Le, who owns Coeur d'Alene Galleries with wife Shawny Le, and husband-and-wife team Ron and Tori Nicklas.

"It's like a little family," says artist Tobias E. Sauer, who goes by Toby.

For example, Kronenberg, whom Sauer credits with mentoring him, and Dudash are two of the 22 artists inducted into the prestigious Russell Skull Society, named for famed Western artist Charles M. Russell.

On the other hand, George Carlson, who lives in Harrison, is internationally recognized, including a rare one-man show at the Smithsonian's National Museum of Natural History and accolades from every heavy hitter in the world of Western art.

The sense of community among Western artists, says Gutting, "ties into an overarching philosophy that is one of the hallmarks of the American West." They're neighborly, she says, not just locally, but nationally.

Gutting, who has been featured in both Southwest Art and Western Art and Architecture magazine, began her art career early alongside her mother, artist Susan Gutting. Her work reflects an affinity for wildlife, especially horses. 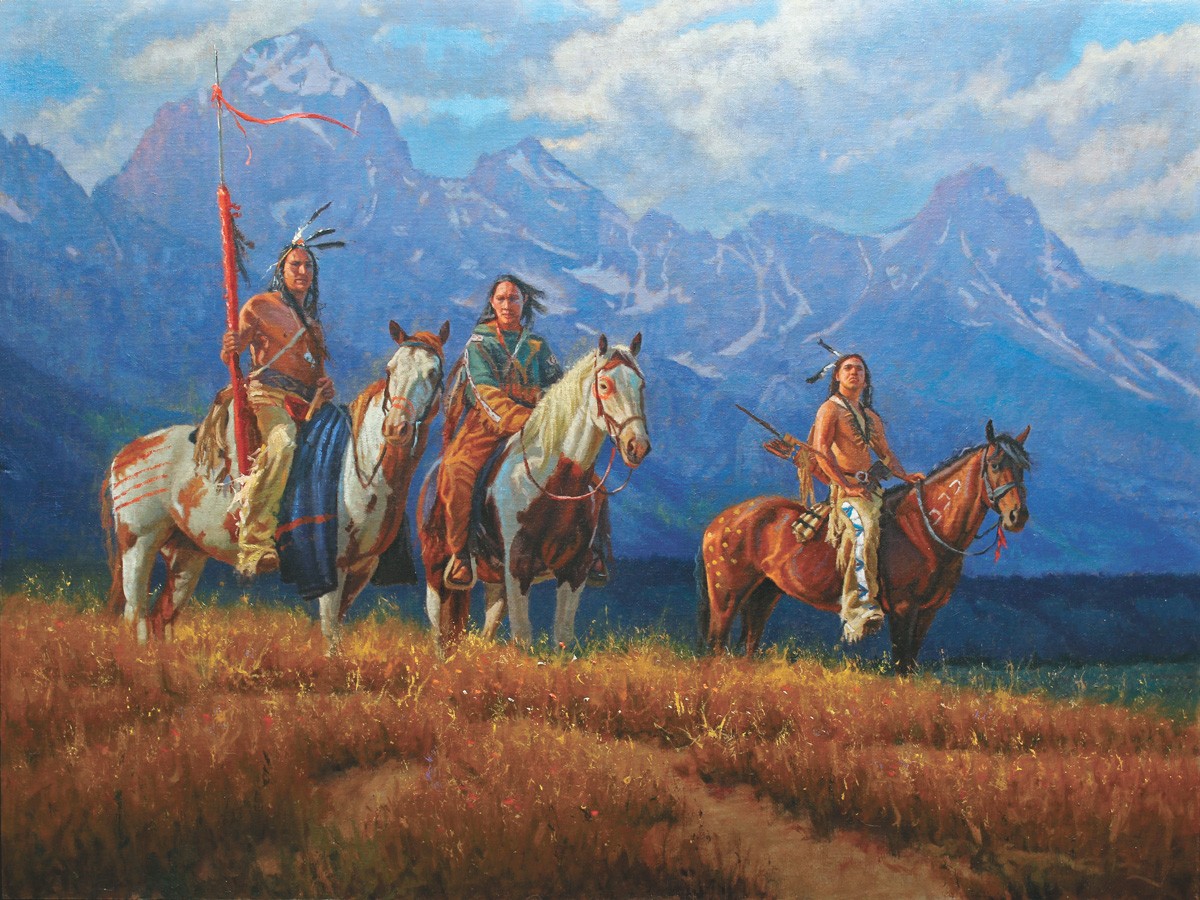 Like Gutting, Sauer also learned about art from his mother, and also has an affinity for animals, as well as the outdoors. A fifth-generation Montanan, he grew up hunting and hiking alongside his father. When it came time for college, Sauer initially pursued art. The emphasis on modernism and experimental painting techniques didn't appeal to him, however, so with his degree in environmental science, he worked as a ranger in Yellowstone.

And then the unexpected happened, inadvertently turning his attention back towards art.

"In a nutshell, we had a [cattle] sale back home and a bull threw me in the air three or four times, stomped on me, broke my back and my leg so I had to have 4 surgeries over several years," Sauer says. He had issues managing the pain, he adds, yet worked his way out of the dark place he'd gotten into by focusing on painting again.

Some of what he's been through puts recent setbacks due to COVID-19 in perspective.

The C.M. Russell auction in March is his biggest show, Sauer says of the multimillion-dollar exhibition held for the past 52 years in Great Falls, Montana, as part of Western Art Week.

"I work for months getting ready for that and when that canceled — I mean, it canceled the week before — it was very scary and very disheartening."

Besides losing a large portion of the $1,000 entry fee, Sauer laments missed opportunities to network during dozens of simultaneous events held during Western Art Week, which was first rescheduled for September, then scuttled until 2021.

Working out of his Hayden studio, Sauer is optimistic about next year and is looking to online sales as a potential bright spot.

Le, whose gallery hosted its annual Miniatures by the Lake Show this fall, agrees.

"Like many industries, the Western art market is in unprecedented waters," Le says. "Overall, there's still a high demand for quality collectible works by historical artists (deceased), and contemporary (living) artists who are priced fairly."

And although the market is driven by premier galleries and big shows like the Russell — as the Montana auction is known — and the Prix de West at the National Cowboy Hall of Fame, online platforms are a large part of the business, Le says, including social media and gallery websites as well as online bidding platforms.

Le's current optimism is driven by online sales elsewhere. "Coeur d'Alene Art Auction and Scottsdale Art Auction both posted over $10 million in sales, and Christie's, Bonhams and Heritage have all had successful American Western auctions this year," Le says. "Collectors are more confident than ever to purchase artwork online, and we've built a strong reputation of integrity, value and quality art, so people don't hesitate to buy from us online."

That bodes well for artists like Sauer and Gutting, who despite feeling connected to the larger community of Western artists recognize that in the end, what they do is a solitary endeavor.

The original print version of this article was headlined "Western Frontier"