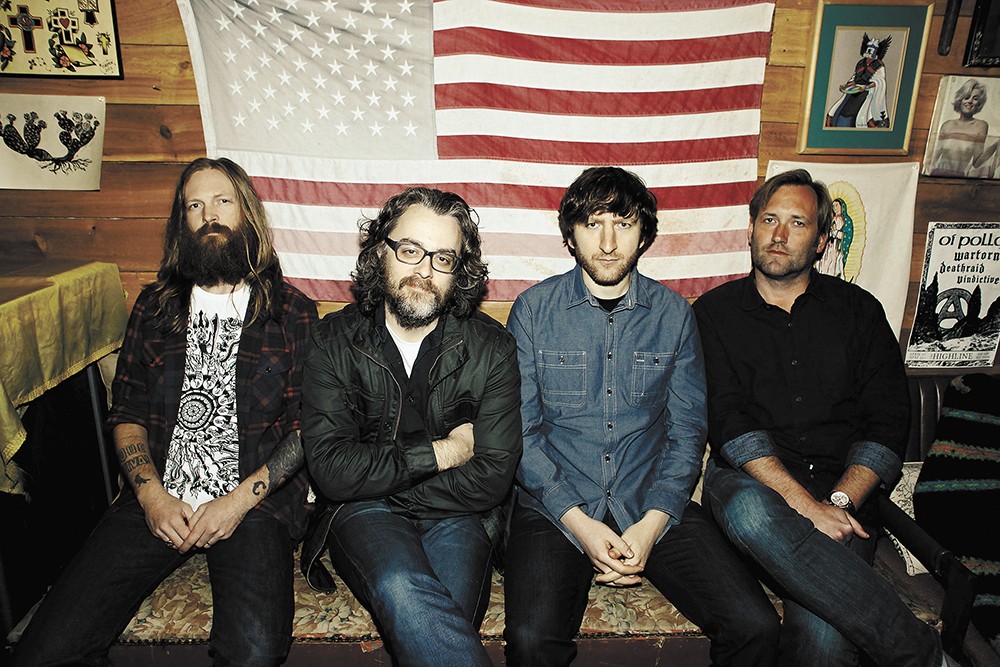 Let Minus the Bear fill you with nostalgia this Sunday at the Knitting Factory.

When Minus the Bear last came through Spokane to headline Elkfest 2014,

the crowd was rowdy. The band's not-too-heavy, progressive math-rock sound was greeted with a surprising fan reaction — people started crowd surfing, much to the chagrin of some in mellower moods.

"It's awesome when people are experiencing the music," says frontman Jake Snider from his home in Seattle. "I'm not a huge fan of the crowd surfing myself, as I've been kicked in the head, but the crowd reaction is fun."

Sometimes audiences don't want to think too deeply about what they're listening to — otherwise electronic acts like Major Lazer, whose bass-dropping shows are little more than light parties, wouldn't even exist. But there's also a market for an enriching musical experience, and math rock, which came out of the late '80s with its battery of ever-changing time signatures and guitar riffs, certainly fits that intellectual bill. Somehow, Minus the Bear has created a sound that's both entertaining and thought-provoking.

Take, for example, "Pachuca Sunrise," the band's most played song on Spotify, with more than 3 million listens combined for its acoustic and electric versions. The slick pop tune sticks in your head.

"Don't cry, I'll bring this home to you / If I can make this night light enough to move," Snider croons on a chorus based more in romance than reality.

The reverberating guitar rhythms switch back and forth, making the emphasis on the off beat. It sounds difficult, but Snider swears that's an illusion.

"Part of that comes from the interplaying that we do; it sounds more complicated," he says. "We don't have a ton of intricate time changes, or other aspects that you associate with math rock. I guess I'd consider us poppy math rock. A lot of people don't know what that genre is; I don't even know what every genre is. It doesn't mean too much to us, really; some of our older bands [Botch, Kill Sadie] were maybe more math rock than this band."

Minus the Bear, and other bands like them, continue to inspire new generations of players. Local progressive rock/jazz group Flannel Math Animal has continued to fiddle with their own complex sound over the years, and frontman Nick Palmieri admits that playing the bar scene can sometimes be a tough sell. He understands the desire to mix the rock genre with more relatable ones, as Minus the Bear does, but his current trio has gravitated toward more complicated rhythms and intricate solos. While on stage they have to count measures in their heads, something Snider says he mostly avoids.

"The community that enjoys this music most are musicians themselves; they understand the complexities that go into it. It's kind of an obsession," Palmieri says. "But there are people who can enjoy it, even if they don't understand it."

Throughout Minus the Bear's 15 years together, Snider says being a part of his band feels the same as it always has. Even with lineup changes, the writing process hasn't changed either. Guitarist Dave Knudson comes into rehearsal with an idea, and the rest of the group plays off of it, trying to find what comes naturally. Snider writes his often emotional lyrics last.

The band's most recent release was a compilation of nearly forgotten B-sides in 2014. Snider says that a new album will be on the way next year, but they don't yet have a name for it, or at least aren't forthcoming about it.

After that most recent crowd-surfing-intensive performance in Spokane, Snider says his crew wasn't deterred from coming back, and they'll play the Knitting Factory on Sunday night with a new drummer, Kiefer Matthias. In his 20s, he's by far the youngest in the group, and Snider says he keeps the band hip and fresh. In recent years, Minus the Bear has toured behind various album anniversaries — top seller Menos el Oso turned 10 last year — but for this show, expect the thrill of new music as well as the old favorites.

"Northwesterners can be a self-conscious bunch; they can be difficult to warm up," Snider admits. "But we understand the audience, and they understand where we're coming from." ♦