Is the Sasquatch! Festival "replacement" in Port Townsend worth your time?

Danny Ngan / THING
Reignwolf brought the rock to THING.
When founder Adam Zacks decided after 2018 to kill off the Sasquatch! Music Festival, the annual Memorial Day music at the Gorge Amphitheatre, it was frankly a devastating blow to Northwest music fans. For over a decade and a half, Sasquatch! had become arguably the premiere festival in the Northwest, mixing top rock, hip-hop, indie, and electronic acts better than any of its peers and offering a true musical oasis for fans who were open to not pigeonholing their own listening.

While nothing can really fill the Sasquatch!-sized hole in many hearts, Zacks stayed in the festival game by introducing THING in 2019. The festival was essentially a much smaller scale spiritual successor to Sasquatch! held at Port Townsend's Fort Worden Historical State Park. From a distance, THING seemed like a festival for people who attended Sasquatch! in their teens and 20s, who still wanted to attended music festivals despite being older — a festival for KEXP-listening Seattleites who have since gotten tech jobs and started families, but rarely go to concerts anymore because they start "too late."

That's pretty much exactly what it is.

While I didn't attend the first year of THING — and then the pandemic put a kibosh on holding it the past couple years — I trekked over to Port Townsend last weekend for two days of the three days (Friday and Saturday) to see it for myself.

The goal was essentially to answer this question for Inlander readers: Is THING something worth making the trip all the way over to Port Townsend to attend in future years?

Stationed on the northern tip of Port Townsend, Fort Worden offers a decent mix of space and intimacy for a festival of this size.  If you're not into having somewhat hectic vibes at your music festival, THING might be right up your alley. With two non-overlapping music stages a few minutes walk apart, you can basically hear everything and have a good view for all of it.  A ton of the crowd sits for all the acts, making it easy to basically be near the front of the crowd on the sides for any act all day long until the night-closing headliner on the main stage. It's one of the easiest festival experiences I've ever had in that sense.

The lineup in 2022 consisted of roughly 10 musical acts per day across the two stages, with music starting around 1 pm and concluding by 10 pm (another point in favor of this being a fest for the older crowd). Headliners included Modest Mouse, Father John Misty,  Goose, and Jungle.  In addition to the two big stages,  there was non-musical programming (podcasts, interviews, game shows, etc.) at Wheeler Auditorium, family activities at the fort's chapel, a large art piece (Luminarium), rows of vendor and food options between the stages,  and a few late-night comedy acts and DJ sets.

While the fort is certainly a nice outdoor spot, it's also not a marvel. It's nice having one stage surrounded by tall pines, but you don't ever exactly feel like you're in nature. It's easy to forget you're surrounded by water because none of the staging takes advantage of that fact.

In terms of cost, a general admission three-day pass for THING cost $350 ($825 for VIP). Single day tickets ran $130 ($300 VIP), on-site camping cost $150 for four nights, and on-site parking cost $35 per day. If you include gas to drive over and other costs (food, drink, off-site lodging if you don't want to camp, merch, etc.), you're probably looking at minimum about $500 to attend the fest. (I was provided a press pass and crashing at a friend's place on Whidbey Island, so my costs were far lower. But the price tag certainly would've been a barrier that might have prevented me from attending if I was paying all out of pocket.) 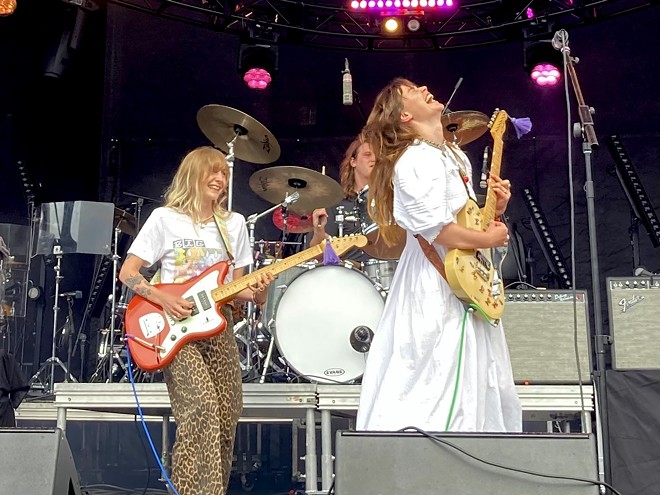 When discussing the highs of THING 2022,  Wet Leg is the obvious starting point. The British rock group has been making waves all year with their fabulous self-titled debut album filled with catchy, humorous, smutty, and heartfelt melodic indie rock. The band's set on Friday afternoon was the perfect encapsulation of all that fresh youthful magic, as lead singer and guitarist Rhian Teasdale combined rock intensity and giggling glee to lead festivalgoers through a set of danceable fun singles like "Wet Dream" and "Chaise Longue" Seeing them live for the first time only cemented my belief that Wet Leg is one of the best bands of 2022.

Father John Misty might've entered a phase where some of his music is a bit too on the serious side compared to the satirical rock romps of his first few albums, but armed with an expansive band, he can still absolutely knock it out of the park live with charisma that can turn from mockingly silly to grab-your-neck intense on a dime. Another favorite who delivered was Illuminati Hotties (a last minute fill-in for Faye Webster), whose hyperactive brand of bratty pop punk can win over even the hardened indie old heads in the crowd.

While the lineup might not've been stacked with a slew of my absolute favorites, the festival seems to have a real focus on quality musicianship which makes everything rise to a certain level of quality. While it was no surprise to see rock wild child Reignwolf — a fixture on the Seattle summer festival scene for a decade — whip the crowd into a frenzy with his one-man band routine, there were plenty of other artists that captured the audiences attention with less brute force aggression.  Jazz is Dead — a Los Angeles collective of killer jazz players who love to bring legends on stage to play with them — showed off unreal levels of musicianship,  while Durand Jones and the Indicators had the people grooving with an incredibly vibrant blend of retro soul and modern R&B.

Here's another major selling point (maybe the selling point?) for THING: Children 12 and under can get in for free. As a result, there were so many kids running around all day and night. With the fest never feeling very crowded, there's plenty of space for the young ones to run around and frolic as the music plays. There are also other kid-focused activities like lantern making and family dance workshops in the chapel on the fort's grounds. For anyone looking to introduce their kids to the music festival life, THING provides an idealistic setup. 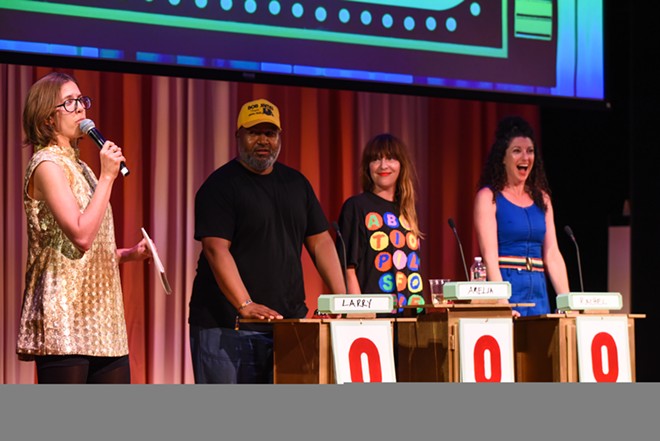 The Future is 0 was fun, but generally THING's non-musical offerings were lacking.

THING does run into many obvious issues due to the fact that it has set up base in Port Townsend. For starters, it's inherently remote. While Gorge events or even Seattle-based fests are pretty easily traversable via Interstate 90, making it out to Port Townsend requires hours of travel from Seattle (either taking ferries or driving south around the Puget Sound and then heading back north).

One could say the remoteness is a feature of the fest not a bug, but that case is pushed to its limits in a few senses. First off, Port Townsend isn't exactly brimming with lodging. The fest offers the option to buy camping passes, but that's an easier sell somewhere like the Gorge as opposed to in a town.  If on-site camping isn't your speed the limited hotels (or even Airbnbs), fill up quick, so there's basically little to no options even within a 30 minute drive in the months leading up to the festival. While THING offers free shuttles around Port Townsend, rides tended to be stressful experiences — sporadic scheduling, frustrated drivers, and seemingly little care for getting people to the late-night ferry on time.

Perhaps this is what leads the festival to having a bit of a less down-to-earth vibe than something like Sasquatch!. For the most part it feels like a much older, more moneyed crowd, which sucks some of the vibrancy from the proceedings. (When Father John Misty made a joke about Amazon execs, one drunk person in the crowd seemed to yell back an objection. Rock!)

To be a real cross-medium draw, THING probably needs to beef up its secondary offerings. The two stage of music are great, but most of the change of pace entertainment offerings felt undercooked. The long-running Seattle-based game show The Future is 0 was an amusing change of pace, but the other events hosted at the Wheeler Auditorium didn't seem to be worth missing any music to see. The inflatable art piece The Luminarium was a total dud, basically just an inflatable gray structure you could walk around in with nothing even a notch above mildly impressive to check out inside.


There's also the very modern, very real issue of Fort Worden being a cell phone dead spot. Leave people you go to the fest with at your own risk because its all but impossible to communicate via texts or calls on the festival grounds.
click to enlarge

Seth Sommerfeld
The wooded comforts of the Littlefield Green stage.

Was spending a couple days at THING Fest generally a good time? For sure.

If you would jokingly refer to yourself as a "washed up old music fan" is THING your speed? Almost certainly.

Would it make a great first-time music festival to take your young kids to? Absolutely.

That said, considering its remoteness and a few of the drawbacks, would I personally go out of my way to attend on my own dime if the lineup was similar in future years? Unlikely.

THING Fest is certainly a vibe, but it's not mine. ♦ 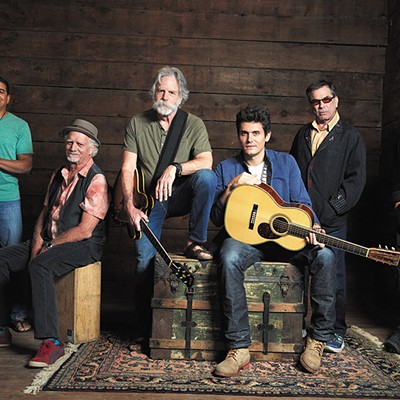