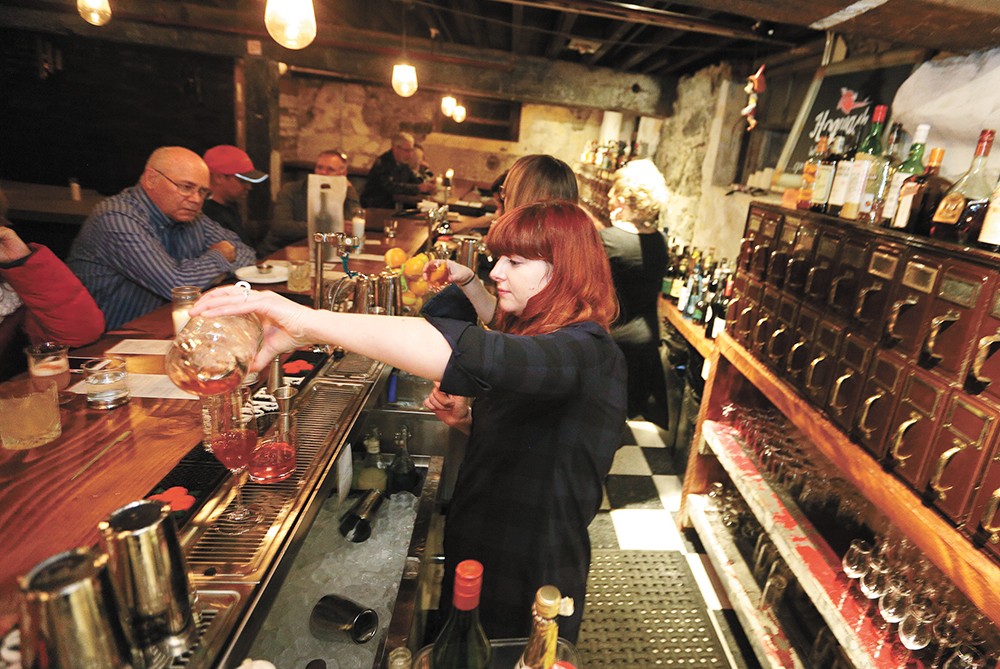 Spokane distillery Dry Fly has been a point of pride among Inland Northwesterners for years thanks to its delicious array of products ranging from gin to vodka to an extensive array of whiskeys. Pretty soon, though, Dry Fly won't be our little secret anymore. The distillery is prepping a new production facility that will allow it to make a lot more of that whiskey. That's great news for Inlander readers who can't get enough of this repeat winner. (DAN NAILEN)

A mainstay at the South Hill gem Revel 77 since their inception in 2012, Kaiti Blom has made coffee her life. Not only has she spent the better part of a decade perfecting her skills at the aforementioned Revel, she's also opened her own coffee shop in downtown Spokane, the cute and impeccable Spaceman Coffee. It should be fairly obvious that she knows what she's doing. (JORDAN SATTERFIELD)

In a town chock-full of bartending royalty, snagging this spot is definitely worth some immense bragging rights. No doubt through a combination of charisma, know-how, and a knack for getting people pretty damn buzzed, Tracey Touch has won over the hearts of thousands of taco-lovers alike. (JS)

Priding themselves on precision and sustainability, DOMA Coffee Roasters take the world of coffee very personally. Founders Terry and Rebecca Patano even went as far as to name their company after their own sons. When a roaster loves coffee that much, you can definitely taste it. (JS)

A family-owned business since the 1980s, Arbor Crest manages to make our own Spokane Valley feel a little bit more like Napa Valley. With as much class and as little pretension as you can imagine, Arbor Crest has no doubt introduced a few generations to the world of wine, and will continue to do so as long as there are grapes on this Earth. (JS)

Underground in the truest, most literal sense, Hogwash is a subterranean dream for anyone with a penchant for nice whiskey and rich food. Their signature cocktails have been lovingly designed piece by piece by each of the bartenders, and the menu even tells you which ones so you know who to thank. (JS)

Atticus' peculiar gifts and warm, rustic atmosphere may be its most outwardly visible components through the shop's front window, but make no mistake that this award means one thing above all: some incredible coffee — meticulous with a hint of renegade, kind of like that uncle who taught you how to curse but is also weirdly good at Trivial Pursuit. (JS)

Forget the angels — beers in the outfield.

There's no doubt the Inland NW Craft Beer Festival has become a local favorite. Inlander readers have voted it the best beer event for three consecutive years, and it makes sense why. The event provides attendees the chance to sample a variety of beers from 40 different Washington breweries while walking the outfield of Avista Stadium. Produced by the Washington Beer Commission, the festival is celebrating 10 years this time around, so you won't want to miss out. (DEREK HARRISON)

With 50 craft beers on tap at any given moment and a menu full of gourmet food, Manito Tap House has established itself as one of the premier South Hill gathering places. Beyond its extensive beer selection, the pub focuses on being environmentally conscious and is a Four-Star Certified Green Restaurant. The craft beer bar may have changed owners near the end of 2018, but it's still business as usual — and that's a good thing! (DH)

No-Li Brewhouse truly lives up to its motto "Spokane Style." From community-focused events to charity fundraising, the brewery's dedication to the region expands far beyond producing locally sourced beer — though, it's pretty darn good at that, too. It's safe to say No-Li's accomplishments haven't gone unnoticed by the craft beer drinkers throughout the Inland Northwest. (DH)

Mountain Lakes Brewery owners Dave Basaraba and Tim Hilton quickly bonded over their passion for craft beer and homebrewing. What started as hosting neighborhood parties led to the opening of a small-batch brewery in March last year. Since then, the pair and their brewery have become a downtown mainstay. (DH)

With bold flavors and eye-catching labels, One Tree sets the standard for hard cider in the Inland Northwest. Its sweet, crisp year-round selections include Lemon Basil, Caramel Cinnamon, Huckleberry and the latest addition, Staycation — the first of One Tree's "core flavors" packaged in cans. These selections can be found in many grocery stores throughout Washington and three other states, stretching as far as Illinois. (DH)

BEST PLACE TO DRINK THROUGH THE APOCALYPSE

Whenever you see a movie with an apocalyptic theme, you inevitably get a bunch of random characters thrown together in an ad hoc group trying to survive its imminent demise. If you're going down among strangers, they might as well be the friendliest strangers imaginable, and that's what I find every time I swing by the Hub on North Monroe. While far from a regular, I've always been greeted warmly with handshakes, hilarious conversations, even homemade banana bread! If you're waiting to be eaten by zombies or destroyed by a meteor, you might as well be watching some hockey with new friends while you do it. (DAN NAILEN)

There aren't a ton of spots to find a truly incredible happy hour bargain on craft cocktails that also comes with great service, flavor and experience. Bon Bon at the Garland Theater is one of those few. With a seasonally rotating $5 cocktail menu during happy hour, guests can enjoy a couple of drinks and something off its bar snacks menu for under $20, generous tip included. (Beer and wine are $1 off during happy hour). Bon Bon's happy hour runs Monday through Thursday from 4-7 pm, Friday through Saturday from 10 pm to close, and all day Sunday. (CHEY SCOTT)