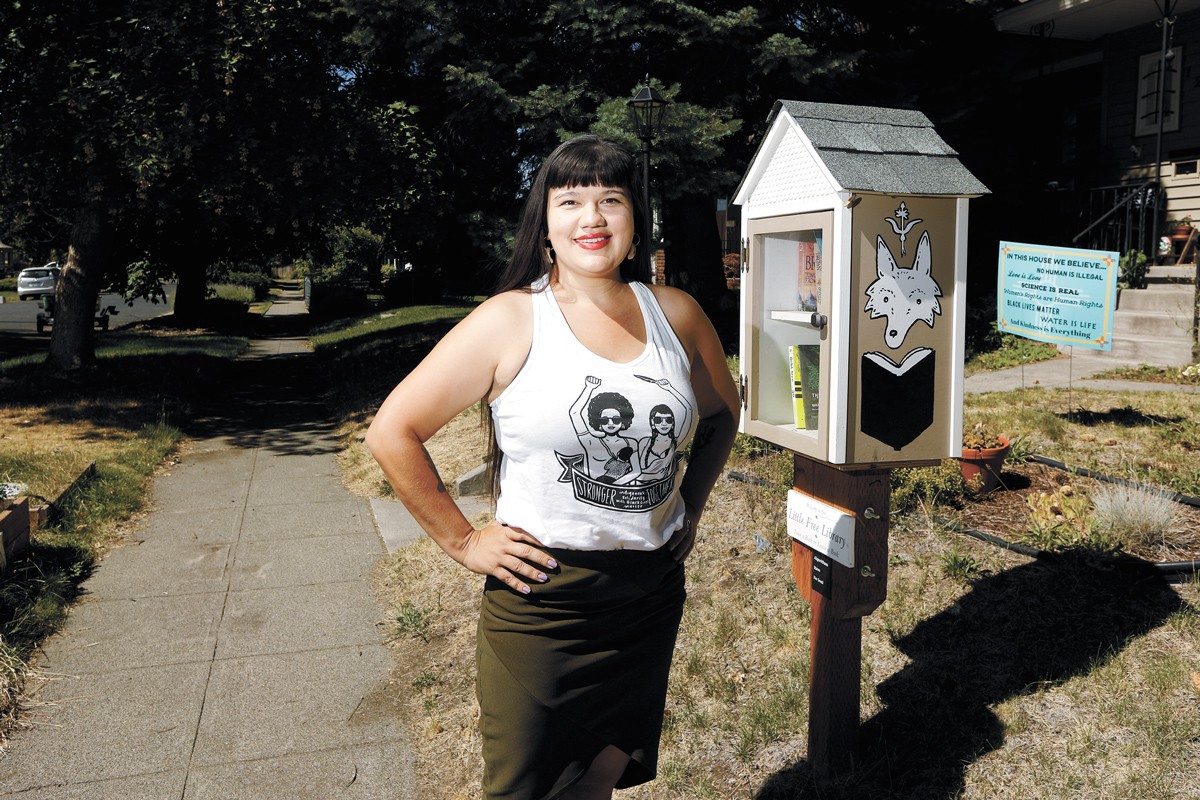 Emma Noyes grew up in Omak, Washington, as a member of the Confederated Tribes of the Colville Reservation. But it took a trip halfway around the world as a college student to inspire her to learn a Native language.

She was studying public health and socio-cultural anthropology and applied for a fellowship that would require her to travel, solo, for eight months across multiple continents. Her proposal was to explore Indigenous solidarity and Indigenous experiences in different parts of the world. When it was accepted, Noyes found herself in New Zealand, where she joined a Maori immersion-language school on a weeklong trip.

"In that one week, I knew more words in Maori than I knew in our Salish language," the 34-year-old Noyes says. "It broke down all those walls that I had about what it meant to be able to learn and speak a Native language ... And it wasn't just words, right? I was able to learn more about the worldview and the relationship that Maori people have to the world around them and to each other, and within their families, through those words. Language is that sort of conduit for understanding a culture."

That week in a faraway land helped light a fire to pursue learning a Native language when she got home, Noyes says, and she remembers thinking "I want to learn an Indigenous language, and I'm OK even if it's not my own. I will do what I can to contribute to the survival of the language."

It would be a few years before she did any formal language schooling — years spent in grad school, and then working to improve health care for Native communities — and that fire remained. Her experience in New Zealand, combined with her long-held desire to have her children grow up learning Salish (not to mention marrying a Salish-language scholar, Jake LaMere), pushed Noyes to pursue the language herself.

This week, one of the tangible results of that pursuit arrives in Baby Speaks Salish, a book Noyes wrote and illustrated being published by Spokane's Scablands Books Sept. 15. The project received a 2019 Spokane Arts Grant Award, and in addition to being a beautifully rendered practical guide to words important for parent-child interactions, it's also an interesting lens into community, a parent-child relationship, and the trauma associated with language.

Language for Native people, Noyes included, has been wrapped up in fear for generations, she says, and she powerfully addresses why that is in the book. Even more so in conversation.

"In our communities, language was physically beaten out of children," Noyes says. "Children were removed from their families and placed in boarding schools, or attended day schools where they were shamed. They were fed a steady diet of shame around their language and their identity as Native people. And we see those detrimental effects today in both educational outcomes and health outcomes in Native communities." 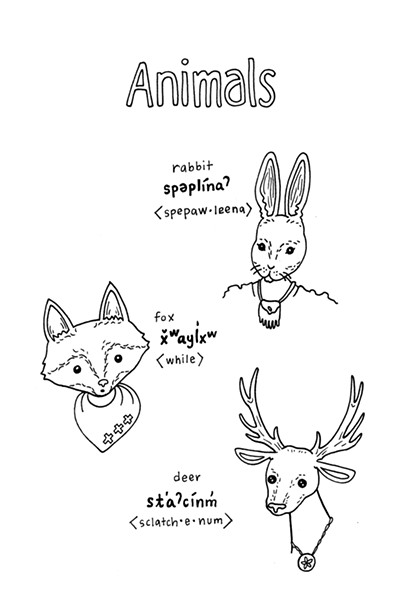 Growing up, she says, that trauma manifested itself in her community and her own family. When opportunities to learn the Salish language were presented, they'd often be met with dismissals like "the person who's teaching it isn't speaking it right" or "that's not the dialect of Salish that our family would have spoken, that's not our language."

"I think internally I had all of these self-imposed barriers to connecting with language that needed to be broken down," Noyes says.

Once Noyes did start learning Salish, she ran into the same issues any adult has trying to learn a new language. It's hard, and it takes a certain amount of vulnerability as well as perseverance to get pronunciations and spellings wrong and stick with it. Even after years of studying and teaching her toddler daughter Maren, Noyes is the first to say fluency is still a ways off. Even so, the rewards are obvious, too.

"I can't even begin to describe how powerful, I can't describe the feeling that I have actually being able to speak these words aloud," Noyes says. "Being able to start to say some of these words was really remarkable."

Noyes' first idea for Baby Speaks Salish was to make a podcast, maybe tackling five words in five minutes. But a combination of technical know-how (or rather, a lack thereof) and a busy household with a new baby forced Noyes to pivot to creating a publication for Spokane Zine Fest in 2017. Her zine had many of the features in the book, including delightful illustrations alongside words and phrases like "did you pee?" and "ice cream." The Salish she uses is the Colville-Okanagan dialect, and Noyes includes the American phonetic alphabet notes she used herself while she learned the words.

After Zine Fest, Scablands managing editor and author Sharma Shields approached Noyes about expanding the idea into a book, and Noyes says her fellow author "fostered a really creative space for thinking about what a book version would look like."

The final product has sections based around subjects like colors, family members, meals, seasons and clothes. And it also has personal reflections on how Maren's day care embraced using some Salish words in class, and how family and friends joined Noyes and LaMere in teaching Maren by learning some Salish themselves.

"The part of the book that I really adore the most at this point was really being able to do an illustrated version of sort of what the meaning of language is for my family and what we're trying to do," Noyes says.

Maren, about to turn 4, already outpaces her mom — "she's at the age she's going to start straight up judging me for not being able to know a word she already uses" — and that motivates Noyes to keep learning. In fact, working on Baby Speaks Salish had already tested her working knowledge of the language.

"When it came to, 'Let's expand to a book. Let's have more categories,' I'm like, 'Oh, man, we might outgrow my vocabulary!'" Noyes says. "If you quizzed me, I still need this book." ♦

Baby Speaks Salish is on sale Sept. 15 via scablandsbooks.org, and $2 from each sale will go to the Salish School of Spokane. There will be a virtual launch party Oct. 15 in coordination with Wishing Tree Books and the Salish School, details to come.