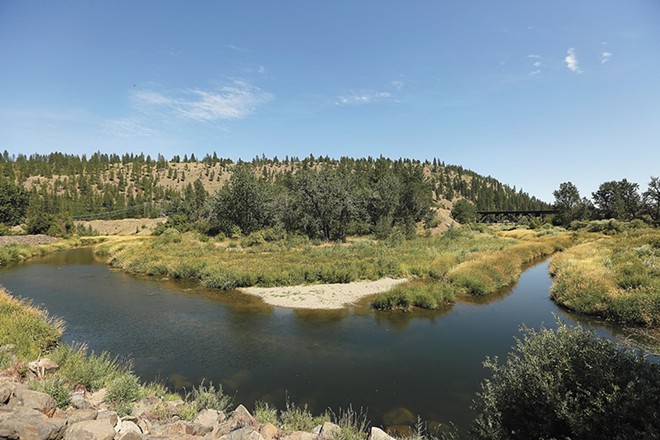 Just a few weeks ago, Department of Ecology Director Maia Bellon said, in no uncertain terms, that Washington state prefers more stringent water quality standards to looser standards that the Environmental Protection Agency said would be OK for the state.

See, back in 2016, the state updated its standards, and at that time, the EPA under Obama said many of the requirements weren't strict enough, and put tighter limits on more than 100 pollutants.

But now, under Trump, the EPA is coming back to say the state's lower standards were fine.

The problem from Ecology's point of view is that when the stricter rules came down more than two years ago, the agency opted to go ahead with that and implement the tougher standards. Because they're so far into the process, Ecology and other environmental groups are pushing back.

While it was a relief for environmental groups in particular that Ecology opted to stick with the tougher rules, a recent move by the state environmental agency has those groups questioning whether the stronger protections are really a priority.

This month, Ecology announced it's taking comments on the scope of an environmental study that will likely end up creating options for the five main polluters into the Spokane River to be allowed to dump far more toxic PCBs (polychlorinated biphenyls) into the river than either the state or federal limit that's being argued about.

To create a "variance" process, the state will conduct an environmental impact study over the next year or more. Through Thursday, July 11, they're accepting comments on what questions that study should be asking and what potential impacts they need to examine.

Then, over the next year or so, the agency will create a draft of what a variance for those five polluters could look like, and again take public input before finalizing the rule.

For some in the environmental community, it's kind of like allowing the five main polluters to apply for a 20-year hall pass to get around the rules, which has some scratching their heads.

Groups like the Sierra Club's Upper Columbia River Group worry that creating a workaround for one pollutant could open the door to workarounds for all sorts of toxins that are regulated in the state.

"Washington state is talking out of both sides of its mouth," said Tom Soeldner, a retired Lutheran pastor and local Sierra Club volunteer leader, in a news release. "We salute Attorney General Ferguson for defending the state’s waters from Trump and the polluters. On the other hand, while Ecology supported Ferguson's action, it’s (sic) proposal to allow pollution variances aligns the agency with the polluters and Trump rather than protecting Washington’s waters."

However, Ecology spokespeople note that the agency has been talking with Spokane River polluters about a potential for a variance for years.

Meeting the incredibly strict 7 parts per quadrillion limit, which is virtually undetectable, will take time, and the agency is recognizing that putting polluters on a schedule to get to the limit will be necessary, explains Colleen Keltz, communication manager for Ecology's Water Quality Program.

"We’re really at the very first part of the formal rule-making process," Keltz says. "Ecology will be setting what we think their highest attainable condition is. The way we envision it is in five-year increments, but the goal is still to get to 7 parts per quadrillion."

If the EPA successfully rolls back the PCB limit to the state's 2016 proposal, the limit would be 170 parts per quadrillion.

In its application, Spokane says it wants a 20-year variance, and that the highest attainable limit it could reach for now would be 792 parts per quadrillion.

But the city is in the process of making more than $350 million worth of water treatment upgrades, says city spokeswoman Marlene Feist, and the expectation is for a new treatment system that will come online in 2021 to lower the PCB levels further.

"We have a major upgrade that will make it completely better," Feist says.

The city asked for a 20-year variance because it’s already installing the best technology it can, and it will take nearly that long for citizens to pay off the current upgrades before the city can really consider asking them to pay for newer technology that has yet to be developed, Feist says.

The water treatment facilities say it's difficult for them to treat water and get PCBs down to the next-to-nothing limits when federal regulations allow manufacturing byproducts to have PCB levels of up to 50 billion pg/L.

Meanwhile, the two industrial polluters in the area who've applied for variances, Kaiser Aluminum and Inland Empire Paper, don't include the limit they think they can attain, but they do discuss what comes out of their systems already, despite the addition of filtration processes.

For Inland Empire Paper, the minimum concentration in testing was 708 pg/L and the maximum was 15,083 pg/L.

PCBs are found in many products, from paints and inks to electrical equipment lubricants, and they wind up leeching into the river in a variety of ways. The chemicals are persistent and have been linked with a variety of health problems.

For Inland Empire Paper, it was actually starting to make recycled paper that created its PCB problem, according to its application.

"IEP was deemed a PCB-free facility until it began recycling in 1991 in response to regulatory
requirements for recycled paper content," the company's application states. "Recycled paper includes inks and pigments that contain inadvertently generated PCBs allowable under federal regulations at concentrations that are billions of times higher than water quality standards currently being imposed on the state of Washington."

Still, White says it's important for Ecology as a regulatory agency to set the bar high, even if it's not attainable yet. If the goal isn't high, he says, there's less reason to push to meet a higher-than-required standard.

"I’m not sure what the incentives are for dischargers at five year windows in a 20 year variance to ever really improve, to be quite candid," White says. "Our fear is these processes will turn into a way to never arrive."

White says Riverkeeper maintains a good relationship with Ecology, but he also shares frustration about the current process pushing back on the EPA while figuring out the variances for PCBs.

"If you have Ecology and the attorney general saying we’ll sue to retain 7 picograms per liter water quality standards, that’s great," White says. "But then with the left hand sort of facilitating and potentially approving a variance where a discharger can discharge almost 800 picograms per liter, I guess that’s frustrating to us."

But it's important to remember that Ecology is still in the process of figuring out all the elements of what a variance would look like, Keltz says, from how long that variance would be for, to how much wiggle room there will be for polluters.

"In 2016, when we got the new standards for our state, everyone acknowledged that meeting the PCB limits would be hard, the technology wasn't necessarily there yet, and the measurement wasn’t necessarily predictable," Keltz says. "But we also recognized there are tools in the Clean Water Act that can help us address that, and still reach toward that standard."

One of those tools is a variance, she says, and in this case, it's very specifically targeted at the five polluters who've applied.

Ecology plans to hold meetings in the region this fall as it develops a draft variance rule to go up for public comment most likely next spring. More information is on the Ecology webpage.

This story was updated Wednesday, July 10, to include comments from the City of Spokane and clarify the level the city had in its application is the currently attainable limit.