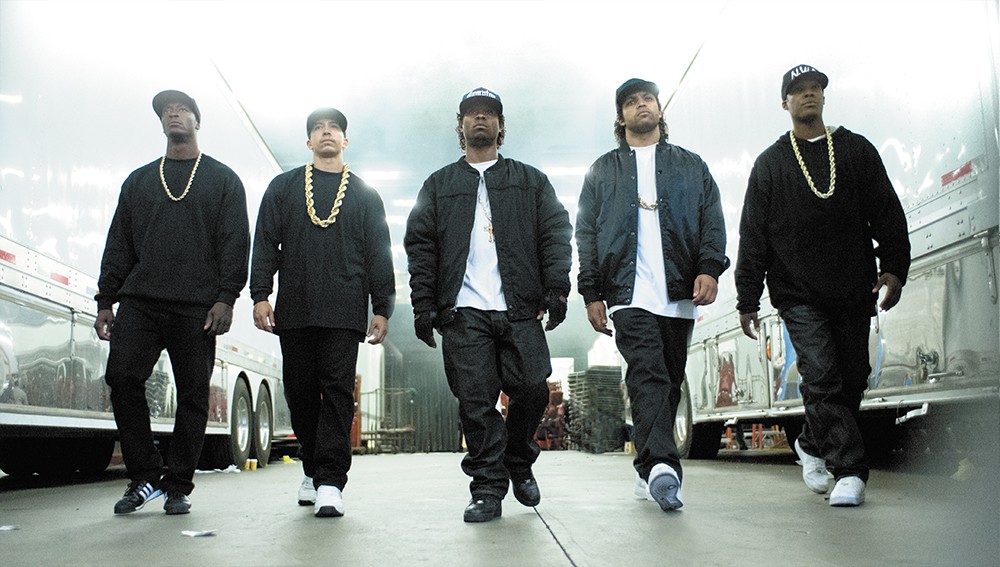 N.W.A. was once considered "the world's most dangerous group."

The fact that I've slotted a track

They took the fiery braggadocio of early-'80s East New York hip-hop, dialed it up to 11, busted the knob off, and then set it ablaze while flipping the bird to the LAPD and the PMRC (Parents Music Resource Center) in equal measure. That's some serious DIY punk rock in my book. Justifiably running nearly two and a half hours, F. Gary Gray's warts-and-all biopic, Straight Outta Compton, sizzles with the recalled and utterly still-relevant rage of young black men caught up and repeatedly knocked down by a society that, to this day, favors old, rich white guys over everyone else.

There's nothing old-school at all about the themes explored in Straight Outta Compton, and the story of a poor but talented group of young black artists mismanaged by a paler shade of manager and the resulting internecine flash points are nothing new, either, but thanks to near-perfect casting, serious attention to period detail, and the still-simmering frustration (and rage) at the heart of the N.W.A story, Straight Outta Compton is a fittingly gritty tribute to the rap group that launched a thousand imitators. (And compared to today's mainstream, watered-down hip-hop, N.W.A still gets your ears' attention from beat one onward — kinda like aggravated assault.)

Screenwriters Jonathan Herman and Andrea Berloff have necessarily condensed the decade-plus story of N.W.A, their rocky relationship with manager/impresario/swindler Jerry Heller (a terrific turn by the always-welcome Paul Giamatti), and their interplay with convicted felon turned grandiose Death Row Records head Suge Knight (R. Marcos Taylor), but still manage to tell the tale relatively accurately. They've even slipped in some outright comic moments, a palliative to what might have been an otherwise grim tale of rags to riches to the unexpected death, from AIDS, of founding member Eric "Eazy-E" Wright at age 31 in 1995.

As Eazy, Jason Mitchell (Broken City) perfectly captures the diminutive rapper's street bravado and punchy style, Jheri curls and all. Corey Hawkins' Dr. Dre, the master producer behind the magic mixing board, is also spot-on, and Jackson Jr.'s Ice Cube is all fire and ice, not yet the lyrical mastermind he would later become but still a force to be reckoned with. In a swift, throwaway scene that nevertheless foreshadows Ice Cube's eventual multimedia domination, we see him writing the script for his cinematic debut Friday, which was helmed by Straight Outta Compton director Gray back in the day.

Recounting '80s reality for the big screen with a story as sprawling as N.W.A's is bound to leave out some of the adrenalized excess that made the group superstars in the first place. There's only so much you can cram into this already overstuffed true-life story without bogging things down in unnecessary expeditionary interludes, and Gray keeps those to a minimum, wisely following the dictum to show and not tell. Buoyed by a soundtrack that'll have fortysomethings cracking open 40-ounces and recalling a marginally simpler, if still chaotic, time in their lives, Straight Outta Compton's bark is just as snarly-cool as its bite. Take that, Tipper Gore.♦

Straight Outta Compton is not showing in any theaters in the area.