Fired Up, Ready to Go 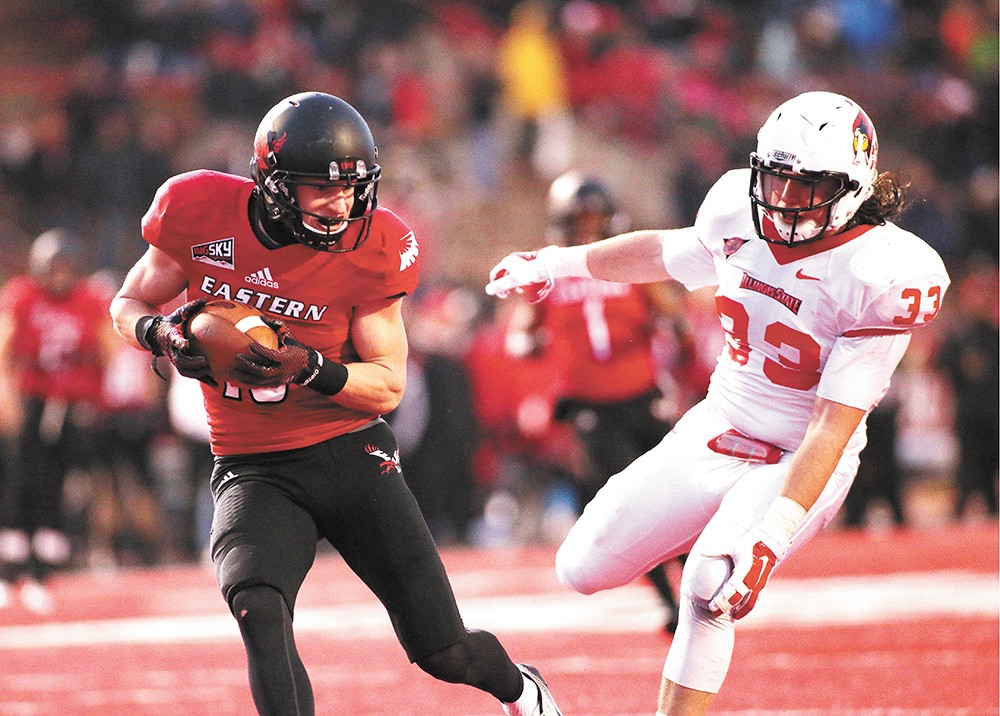 The smoke enveloping the Inland Northwest isn't utterly out of place considering the flaming red turf and the sign proclaiming EWU's Roos Field "the inferno." But the wildfires are causing some headaches for a team getting ready to defend its Big Sky title, make a run at a national championship — oh, and open the season against powerhouse Oregon on the road, with their former quarterback now wearing whatever insane combo of green, yellow, silver and white that Nike deems worthy.

The poor air quality having forced a cancelled practice the day before, the Eagles and head coach Beau Baldwin are working double-time during a practice last week. While hip-hop pumps through sideline speakers, linemen face off in a showdown of protection and attack techniques, while downfield the offensive skill players — quarterbacks, receivers and running backs — run through a rapid-fire exercise of passing plays. To the casual observer, every drill is quickly done, then dispatched to move on to another. To the coaches, though, who had the team on the field just 12 hours earlier for work under the lights, the energy is flagging. "Let's see some urgency in this drill!" Baldwin bellows. The players react accordingly.

Urgency isn't just a reaction to current circumstances for the Eagles, but a way of life for a team consistently boasting a high-flying offense that racks up points and yards at a prodigious rate. Baldwin's system, entering its eighth year, has made the Eagles Big Sky champs or co-champs the past three years running, and arguably the team that every other school in the conference knows it has to knock off for any chance at winning the title. Having that target on the team's back is something the coach welcomes.

"To have consistency in such a tough conference, to lose two Big Sky games the last three years and win three Big Sky titles, it's tough," Baldwin says. "But we love the challenge of knowing we're a team that's going to be circled on a lot of people's schedule."

The team's consistent success, including the 2010 Football Championship Subdivision national championship, has turned Eagles home games into must-go events — "it's amazing how it's grown in the last five years," Baldwin says — and made a big difference in the caliber of athlete Baldwin can recruit to the small Eastern Washington city. That's an advantage of evolving into an elite program; the Eagles don't have to rebuild a roster year to year, they can instead reload.

This year, Baldwin says, the offensive line and receiver corps, including preseason All-American Cooper Kupp, are full of experienced leaders, while the defense — particularly the linebackers — will rely on young talent to replace departed veterans.

Redshirt freshman Alek Kacmarcik is part of the new blood of the linebacking crew, and he was in the thick of things at practice, barking signals to defensive players with more experience. The Woodinville, Wash., native is excited to get back on the field after being relegated to the scout team last year, where he was named Player of the Year.

"I think there's a lot we can step up from last year on the defense," Kacmarcik says of the challenge ahead. "We have a younger squad, a lot of new pieces, but we have an opportunity to prove ourselves and show the Big Sky what we can do."

Kupp has already proven himself, emphatically so, on the offensive side of the ball. Heading into his junior year, he's already a two-time All-American and holder of numerous national, Eastern and conference receiving records. He spent his summer getting married and working at the Manning Passing Academy (of the Archie/Peyton/Eli Mannings).

Eagles fans can expect a lot of No. 10 scampering around and catching passes, but this year the ball will come from new starting quarterback Jordan West, who took the job after last year's starter Vernon Adams transferred to Oregon.

Kupp says he started working with Adams' various potential replacements last winter, getting as many reps as possible to establish the chemistry necessary to exploit opposing defenses to the fullest.

"I don't think people realize how much a quarterback and receiver have to be on the same page," Kupp says. "They have to be seeing the same things, hitting the same spots. It's coming along really nicely with Jordan, and he's done a great job rallying the guys."

Much like his head coach, the newlywed receiving star relishes the chance to take on all comers as the team currently occupying the top of the Big Sky mountain. Being the "hunted" suits him, Kupp says.

"We embrace it. At the same time, we take that same attitude toward the people we play," Kupp says. "While we expect to get everyone's best, we want to give our best every time we step on a field. Nothing changes." ♦