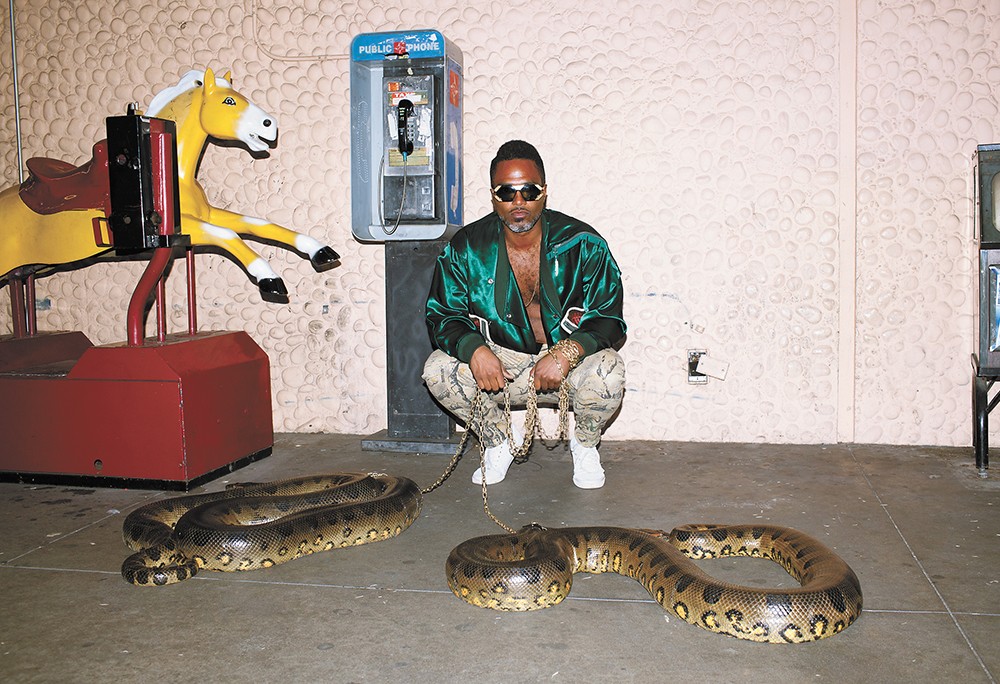 As MC Ishmael Butler explained from his Seattle home recently, about half of their sets are improvised. The jazz-influenced, experimental hip-hop duo headlines this year's Volume, closing out the Overbluff Cellars/Terrain Stage on Saturday, and not even Butler knows exactly what that will look like. As a professional musician since the early '90s, it would seem that Butler's career has been somewhat improvised as well.

There was a time when the Seattle native had to get out of Washington. He fled to the East Coast for college and eventually went on to form the alternative hip-hop trio Digable Planets in Brooklyn, where he was known as Butterfly. After moving back home, Butler started Shabazz Palaces with fellow hip-hop artist Tendai Maraire in 2009, and they soon were signed to Seattle's Sub Pop Records, becoming only the second hip-hop group on the label.

Butler has a busy summer ahead of him. Digable Planets heads out on a reunion tour, including a spot at Sasquatch!, and it was recently announced that Shabazz Palaces would open for Radiohead at a set of Los Angeles shows. We caught up with Butler to find out what it's like being him.

INLANDER: There's so much going on for you with your two groups. How do you keep it all straight?

BUTLER: Just practicing a lot. It's natural. I'm very familiar with the material and I always get excited by the opportunity. And that people want to come and listen to us, it's an exciting reality. It's easy to get motivated and want to participate. Right now, for Digable Planets, I rehearse with the band in Seattle and the other two [Mary Ann "Ladybug Mecca" Vieira and Craig "Doodlebug" Irving] fly in and we tighten it up.

How does it feel to be headlining an entire festival in Spokane?

Sounds good to me! (laughing) We never played music there.

You're also playing Sasquatch! this year. Do you like doing festivals, rather than more intimate shows?

I like 'em both. Festivals come secondary, of course, because we're not that big of a band and we're scheduled in the daytime most of the time. It doesn't have the dramatic effect, with the overall mood. It's got its own idiosyncrasies: it's summer, the weather is nice, it's different and you just change gears. Most people would like to perform with any opportunity they can get.

How did you hear about opening for Radiohead?

We knew they had some interest in having us open up for them. ... We were hoping that we would get that opportunity. Actually, when I was living in Oakland with my daughter, we listened to OK Computer over and over. I immediately told my daughter when we heard the news and she was impressed. So yes, we're excited.

Lese Majesty came out two years ago; do you have anything new up your sleeve?

We do a lot of improvisation, so it's always new with every show. But I'm always nervous, like before a basketball game, when you get to the moment of truth, you have the skill and nervousness and you rely on what you've been practicing for.

Where does the music come from in you?

That within me is a talent and a passion. It's an ethereal divine happening. It's like being open to the vibrations; I don't know where they come from. I'm not doing it so much as it's happening with me.

Is there ever a moment where you think something may be too strange for people to get?

I don't worry about it. I know it's a possibility and a probability. There's some mainstream music that's weird as f--- to me, so there's always going to be another side. I know it's going to happen. I just realize that I do my own thing.

How old are you?

46 years, not sure how long in this body though. I have visions from all different kind of times that seem too intimate to be fantasies. I probably spend more time channeling that rather than the present reality.

You know, I spend a lot of time by myself. I read a lot; I make a lot of music. On guitar or drum machine or effects machines. I exercise. I daydream a lot. I don't get bored. I try to avoid as much device time as possible. I'm old, and we don't trust these things. But I'm not anti-social media, even though you're by yourself when you're doing it. I'm aware it's something I have to do.

What made you come back to Washington?

My mother, she got sick. I was away and young. I was caught up in the success and it took me far. I miss my mom, I missed Seattle. I had been gone a long time, I felt drawn and came back [in 2004]. It was a feeling and I did it.

What can we expect from the performance?

We each have a lot of equipment, a lot of sound-making modules, we use it all. We have no set list, we kind of just vibe off the crowd, off the atmosphere, and go from there. No, there aren't any dancers with our set, not that we'll be bringing anyway, but people can come up and try. We don't block people's expression. ♦

Your last-minute guide to Volume 2016