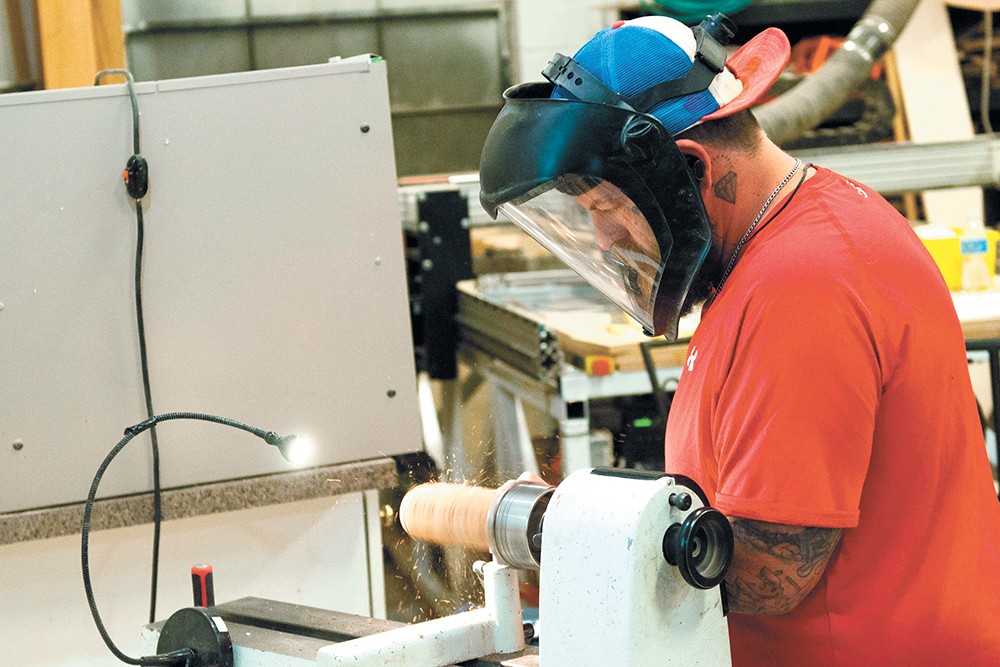 Daniel Walters photo
Terry Matthew says he was "dying" before the Vets Garage and other services for veterans helped him turn around his life.

Psychologist Dennis Pollack knows the stakes surrounding the uncertain future of the Vets Garage aren't abstract. They're life and death.

"We have four veterans who say they would not be alive if not for this program," Pollack says.

Pollack, who has been working with veterans as a psychologist since he was a 23-year-old grad student during the height of the Vietnam War, started the Vets Garage as a tiny woodworking shop in an actual garage in the back of a building on Sprague Avenue about 12 years ago.

There was no heating, no cooling — and the bees were nesting in the walls. It was cramped and dingy.

But the principle was sound: Give veterans a place to come and work with their hands, and along the way, give them counseling, camaraderie and assistance navigating the bureaucratic labyrinth of social services. Pollack estimates that the Vets Garage has connected veterans to $1 million in benefits they wouldn't have received otherwise.

And in 2015, the garage got a slightly better facility: They moved into a modest building, once used for Spokane County record storage, across from the Spokane Regional Health District. Spokane County has been letting them stay there for a minimal rent. 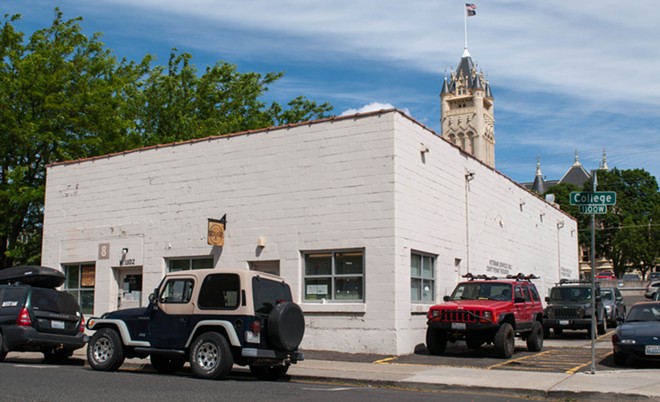 It was always the idea to eventually move out and find a bigger place, but in the last three or four months, Pollack says, pressure has been increasing. The aging building has become too expensive for the county to repair, and now the county is considering turning the building into more parking spaces.

Pollack says the Vets Garage has been told it needs to be out by the end of June.

"It is not an adequate facility for their operation," Gimmell says. "The county was clear that this was a temporary — not a long-term arrangement."

But so far, they don't know exactly where they're going to go next, and how they can afford it.

Sawdust sprays onto former military police officer Terry Matthew's knuckles as he turns a wooden dowel around on an industrial lathe. A few minutes later of honing, and he pulls out the finished product: a toy top.

He sets it spinning on a sawdusty table.

"They truly give you power tools for life," Matthew says about the Vets Garage. "I'm not going to mince f—-ing words. It saved my f—-ing life."

Matthew has a raspy voice, a red beard and a diamond tattoo near his eye: Tears, he says, like diamonds, are created by heat and pressure.

Matthew says he's survived multiple suicide attempts. There was a time, Matthew says, that he was homeless, withdrawing off heroin, puking his guts out in a detox center.

"What's my life worth?" Matthew says. "It wasn't worth anything to me at one time."

But here? Here they see value in him, he says. He says it's a "safe place" where he can "go to every single day and learn a tradecraft that's honorable."

He gets a sense of accomplishment. He's able to create something tangible, something he can hold.

"We get trapped up here," Matthew says, pointing to his head.

But here he has distraction, a place to channel his negative energy. He has a routine.

"Every day I wake up and actually have some serenity. This is what it's all about," Matthew says. "Vets Garage has shown me that pathway, how to get there."

On a Monday morning, one veteran is forging a new filter for his Harley motorcycle. Another is building handmade toy trucks for the Spokesman-Review's Christmas Bureau. A third shows off the handcrafted wooden pens he creates.

The value isn't just that they can receive therapy from Pollack: It's that they receive support — even mentorship — from their fellow veterans.

The gray-haired Vietnam-era vets can talk to the Iraq vets about the similar hells they've lived through — and the possibility of hope.

Daniel Walters photo
Matt Litten says Iraq and Afghanistan left him messed up — but the Vets Garage has given him hope and stability.

Matt Litten stares out from his glasses with wide eyes. He's here with his pitbull Loki, a service dog who helps him weather the swings of post-traumatic stress disorder. Litten says he's a combat engineer who spent a year in Iraq and a year in Afghanistan, that he weathered improvised explosive devices and traumatic brain injuries. But it was when he came home that things really got tough.

"There is no war harder than the 'civilian war,'" Litten says. "Iraq was easy. Afghanistan was easy. This shit's hard. "

Like Matthew, he says he's been through multiple bouts of homelessness. He's suffered a mental breakdown. He's struggled with substance abuse. For months he knew about the garage, but was afraid to go.

"PTSD is a weird thing," Litten says. "It's not that I'm scared that I'm going to get hurt. I'm afraid that I might hurt someone."

But while his outlook remains laced through with cynicism and darkness — that nobody loves him, that nobody cares — the Vets Garage is an exception.

"They give a shit," Litten says. "They genuinely care. They're not here to take from me. We're out here to grow together."

Matthew has taken him under his wing. Litten says Matthew's teaching him not just how to work with wood, but how to "civilian." Litten uses it as a verb to describe the process of adjusting and reacting to civilian life. What to do, what not to do.

They refer to each other as brothers.

"We both held our hand up, swore to give our life for this country," Matthew says. "If that's not as thick as blood, I don't know what is."

"There's nothing thicker," Litten says. "This is the most rehabilitative healing factor I've found yet."

For the approximately 175 veterans that the Vets Garage sees every month, the uncertainty about the garage's future could be a scary moment. Yet many of them have chosen to concentrate on the more immediate challenges in front of them.

"I've had anxiety of it going away," Matthew says. "I had to take my mind off of that. I have complete faith in our leadership."

Don Robbins, a vet who joined the Army during the last six months of Vietnam, echoes that hope.

Spokane County — as well as private organizations like Avista — have offered their assistance to identify a new location.

"We've been more than patient and tried to work with them and help them out to give them enough time to find a space," Gimmell says. "We're very supportive of them finding a better adequate building."

Ideally, they'd find a place with an actual garage door, maybe one big enough to work on cars.

Daniel Walters photo
“Keeps me out of the house. Keeps me out of trouble," says Jay Braun, of the Vets Garage. "Hopefully we’ll get a new facility and it will be bigger and better.”

But so far, promising possibilities have fallen through. The loading dock to WSU-Spokane's Jensen Byrd building was seen as an ideal new space — a garage that was close to a whole host of other services and partnership opportunities with the college and medical school. It didn't work out.

"As much as we wanted to support the great work that the vets are doing, we had determined that there were too many expensive physical problems that needed to be addressed to lease that part of the building," says Jon Schad, director of facilities for WSU Spokane.

The biggest challenge, Pollack says, is not so much finding a garage, it's being able to find a garage they can afford. At minimum, he says, they need $4,000 to $5,000 a month for a proper facility. They're looking at grants. They're considering selling the products the veterans are making. And they're launching an online crowdfunding fundraising campaign called "Be the 2,000," at vetsgarage.wixsite.com/vetsgaragespokane.

If they can get 2,000 people to donate $10, the thinking goes, they'd not only be able to pay rent, they'd be able to actually pay salaries, instead of simply relying on volunteers.

And nobody understands how crucial it is to keep the Vets Garage open like the veterans who it's helped to save.

"There is a child in Syria, right now. And he's being shot at, and he's killing people," Litten says, talking about young American veterans the Garage could help in the future. "And he's going to come home f—-ed up. And if we're not here, who is going to catch him?" ♦