From solo musician to in-demand guitarist to open mic host, Lucas Brookbank Brown is all over the Spokane music scene

Lucas Brookbank Brown gets around. If you've been going to local shows with any regularity in the last few years, you've probably seen him in some capacity — as a member of the hip-hop fusion collective Kung Fu Vinyl, as a guitarist for the long-running funk band Left Over Soul, as the frontman for blues-rock act BREADBOX, as the regular host of open mic and jam nights at the Red Room Lounge.

He's all over the place in terms of style, too, and it's fitting that Brown refers to himself as "a sound chameleon," a turn of phrase he just picked up from a poem by Tim Earley.

"I really identify with that, 'cause I have to wear a lot of different hats," Brown tells the Inlander.

Brown, 27, was born and raised in Spokane. His father is a social worker and his mother is politician Lisa Brown, who ran for Congress last year, and he grew up hearing music from the '60s and '70s — the Beatles, Neil Young, Joni Mitchell. Brown himself typically dresses like he stepped straight out of that era, boasting shirts with wide lapels, vintage jewelry and suede cowboy hats, though so many of the groups he plays in would probably be considered more contemporary. Chameleonic, indeed.

"I don't really hold grudges against any genre," Brown says. "I'm open to anything, especially with some good lyrics."

Young Kwak photo
"I feel like people aren't leaving Spokane to go to Seattle and Portland to try and make it now," Brown says.

He started taking guitar lessons when he was 12, and was often jamming with friends while he was a student at Lewis and Clark High School. He remembers his first real show, when he was tacked on to the lineup of a Rock the Vote event organized by his mom at the Empyrean Coffeehouse, also featuring David Bazan and Pickwick.

"There's probably YouTube videos of that that are so embarrassing," he says, "me trying to play Jimi Hendrix when I was 16."

Brown soon put together a band called Bodhi Drip — which still plays occasionally in one form or another — before heading off to Evergreen State College after high school. That only lasted about a year: Brown moved back to his hometown in 2011, and that's around the time he met the guys from Left Over Soul at the defunct downtown venue the Phat House. He's been here ever since.

"I had a lot of music in my head," Brown says. "I didn't have a band together or anything. I was just kind of playing with [Left Over Soul] here and there, doing odd jobs. I wasn't really making money playing music or anything."

But he eventually landed a weekly gig playing at Zola with his band BOOMSHACK, and then slowly added all of the aforementioned projects onto his rotating roster. In that time, Brown says he has seen Spokane's music landscape diversify, and it's probably because musicians aren't bouncing to bigger cities like he once tried to do.

"I feel like people aren't leaving Spokane to go to Seattle and Portland to try and make it now. I feel like that's what you were supposed to do 10 years ago," Brown says. "I still have people tell me that all the time, 'You should get out of here for a bigger scene,' and I do know what they're saying. But I do love the community here. I think there's more good music here than most people seem to know."

Brown says he's constantly writing music for himself, sometimes up to three new songs in a week, and he carries around a leather-bound notebook filled with lyrics and ideas for melodies. His solo music is more in line with contemporary folk-pop — a little bit Lumineers, a little bit Tallest Man on Earth — and although he has never released an album of his solo material, he's currently chipping away at one in downtown's Lead Pencil Studios and on his own home recording setup.

He's also booking shows for multiple venues, and has been hosting open mics every Monday and freeform jams every Wednesday at the Red Room Lounge for the past two and a half years. It's this gig that, arguably, Brown revels in most: He gets to play producer and mentor, in a sense, watching fledgling musicians find their sea legs and develop their voice one week at a time, encouraging talented folks to come back, and even introducing like-minded artists to one another.

"I've definitely watched people be really shy, and then kind of come out of their shell week after week," Brown says. "I love making connections, and then watching them bloom on their own." ♦

The original print version of this article was headlined "Sound Chameleon" 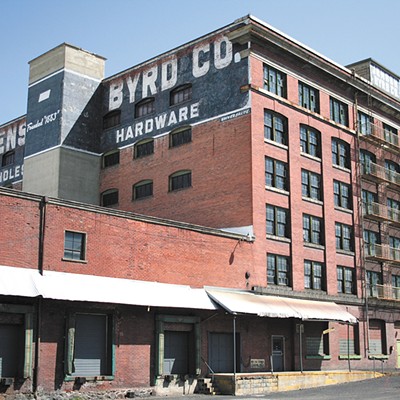 Trump's nationalism called out in Paris, more dead in California fire, and other headlines