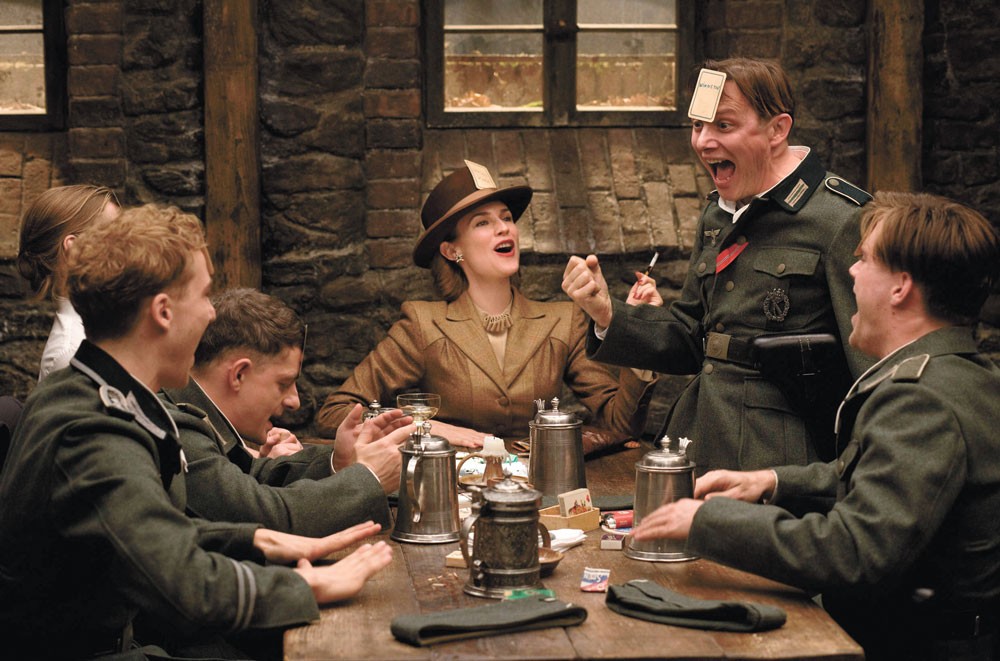 Using a song from another soundtrack is part of the delightful weirdness of Quentin Tarantino's Inglourious Basterds.

As long as movies have had sound, music has been inextricably linked to the art form. It wasn't until the mid-'50s, though, that popular music took over cinema, when "Rock Around the Clock" blasted over the opening credits of the inner-city school drama Blackboard Jungle and changed everything.

Since then, picking the perfect pre-recorded track for a specific scene is a skill unto itself: From the thunderbolt of Steppenwolf's "Born to Be Wild" in Easy Rider to John Bender pumping his fist to Simple Minds in The Breakfast Club, to Dustin Hoffman's post-college malaise reflected in the songs of Simon and Garfunkel in The Graduate, we tend to associate those songs with the images they soundtrack.

This summer, two beloved music-centric films — 1990's Pump Up the Volume and 1995's Empire Records — are celebrating big anniversaries, and both are remembered as much for their youth-oriented themes as their zeitgeist-y soundtracks. Inspired by those films, I've decided to run down some of my favorite needle drops in film history, those moments when pre-recorded pop songs have forever cemented themselves in cinematic history.

"Wise Up," Magnolia (1999)
Paul Thomas Anderson's delirious opus Magnolia is about people clinging to the ends of their emotional ropes, its action swirling around a mosaic of characters tenuously connected by chance and circumstance. It's near the final stretch of the film's three-hour runtime that Anderson makes his wildest stylistic gambit: Everyone breaks into song in a spontaneous performance of "Wise Up" by Aimee Mann, whose lyrics communicate the characters' collective loneliness better than any dialogue could. It's one of the most electric and straight-up gutsy feats of filmmaking I've ever seen, and it will either wow you or turn you off completely.

"Fight the Power," Do the Right Thing (1989)
Public Enemy's anti-authority, anti-capitalist anthem was perfect for Spike Lee's equally impassioned breakout film, which featured the track in an opening credits sequence that has Rosie Perez dancing along as if her life depends on it. It's energetic and vital, a visual defibrillator that raises your heart rate and sets the tone for the movie to follow. Fun fact: Lee has said he modeled that credits sequence on Ann-Margaret's opening number from the 1963 film adaptation of Bye Bye Birdie, another reminder that our most transgressive working filmmaker is heavily influenced by the glitz of old Hollywood.

"Cat People (Putting Out Fire)," Inglourious Basterds (2009)
Quentin Tarantino is the master of the needle drop, and so many of his films have indelibly connected songs to images — Steeler's Wheel in Reservoir Dogs, Urge Overkill in Pulp Fiction, Nancy Sinatra in Kill Bill. But one of his best and least conventional uses of pop music comes near the climax of his Nazi-killing thriller Inglourious Basterds: As the vengeance-seeking Shoshanna kicks off her plan to lock Hitler in a movie theater and set it ablaze, Tarantino cues up David Bowie's "Cat People," the title song of a 1982 Paul Schrader film. It's an unexpected and delightfully anachronistic song choice that fits the mood and energy of the scene.

"Layla," GoodFellas (1990)
There's an argument to be made that Martin Scorsese helped popularize the rock-centric soundtrack, and everyone has their idea of the iconic Scorsese musical cue. My favorite occurs near the end of his 1990 masterpiece GoodFellas, as the film's central criminal enterprise comes crashing down in a montage of violence set to the soaring, melancholy piano-and-guitar coda of Derek and the Dominos' epic "Layla." It's such a perfect melding of image and sound that it's no surprise to learn that Scorsese orchestrated the scene specifically to the song, playing it on the set so he could synchronize the action to the music.

"Tiny Dancer," Almost Famous (2000)
Another filmmaker who knows his way around a musical cue is Cameron Crowe, and arguably his best film is an autobiographical drama about his own time as a teenage Rolling Stone reporter in the 1970s. The film's finest musical moment occurs following an emotional blow-up within the fictional rock band Stillwater, and as everyone sits on the tour bus stewing in anger, Elton John's "Tiny Dancer" comes on the radio. One person starts singing along, then another and another, and soon the entire bus is belting along, all of the ill will evaporated. It's one of the most exuberant, joyful illustrations of the healing power of music in any movie. 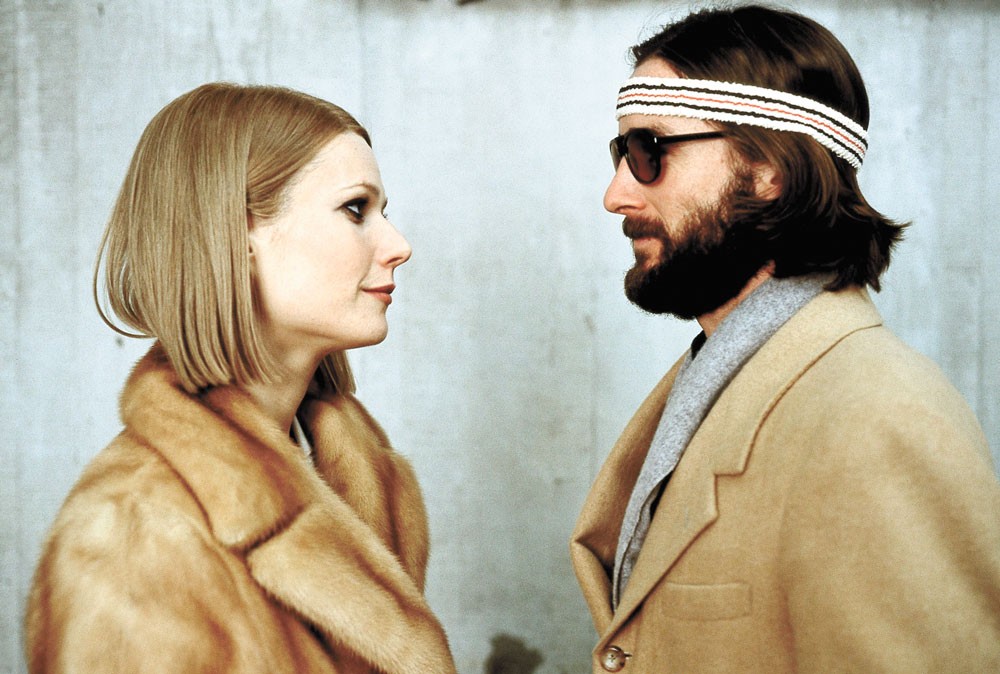 "These Days," The Royal Tenenbaums (2001)
Any film soundtrack aficionado has at least one from Wes Anderson in their collection, and it's because his penchant for '60s pop curios and Kinks deep cuts perfectly suits his exacting visual style. Of all his films, I'm most fond of The Royal Tenenbaums, and his use of this 1967 gem sung by former Velvet Underground vocalist Nico (and written by a teenaged Jackson Browne) is a quintessential Anderson moment. It kicks in as the mentally disturbed Richie Tenenbaum is reunited with his estranged stepsister Margot, and as she exits a bus and comes back into his life, the movie stops dead so the music can overwhelm us for a few seconds.

"Hip to Be Square," American Psycho (2000)
Throughout Bret Easton Ellis' controversial 1991 novel American Psycho, Wall Street murderer Patrick Bateman interrupts graphic descriptions of his crimes with long-winded personal essays about some of his favorite artists — Whitney Houston, Phil Collins, Huey Lewis and the News. It's that latter band that features most prominently in Mary Harron's brilliant film adaptation, specifically in a sequence where Patrick (Christian Bale, never better) dons a plastic poncho and buries an ax into one of his rivals' heads, all while dancing to the new wave sounds of the News. It's that cognitive dissonance between upbeat pop and bloody violence that makes the movie such a maniacal satire.

"Just in Time," Before Sunset (2004)
Over the course of three films, director Richard Linklater has followed the ever-shifting relationship of Celine and Jesse (Julie Delpy and Ethan Hawke), beginning with a one-day fling in their 20s and picking up at random times over the years. In this second installment, the characters meet up again after a decade apart, wandering around Paris and wondering what might have happened had they stayed together. In the film's final scene, Celine puts on a Nina Simone album and starts dancing, and through movement and music, we know exactly where these characters will end up. The story continued with 2013's equally great Before Midnight, but it could have ended right here on a perfect note. ♦