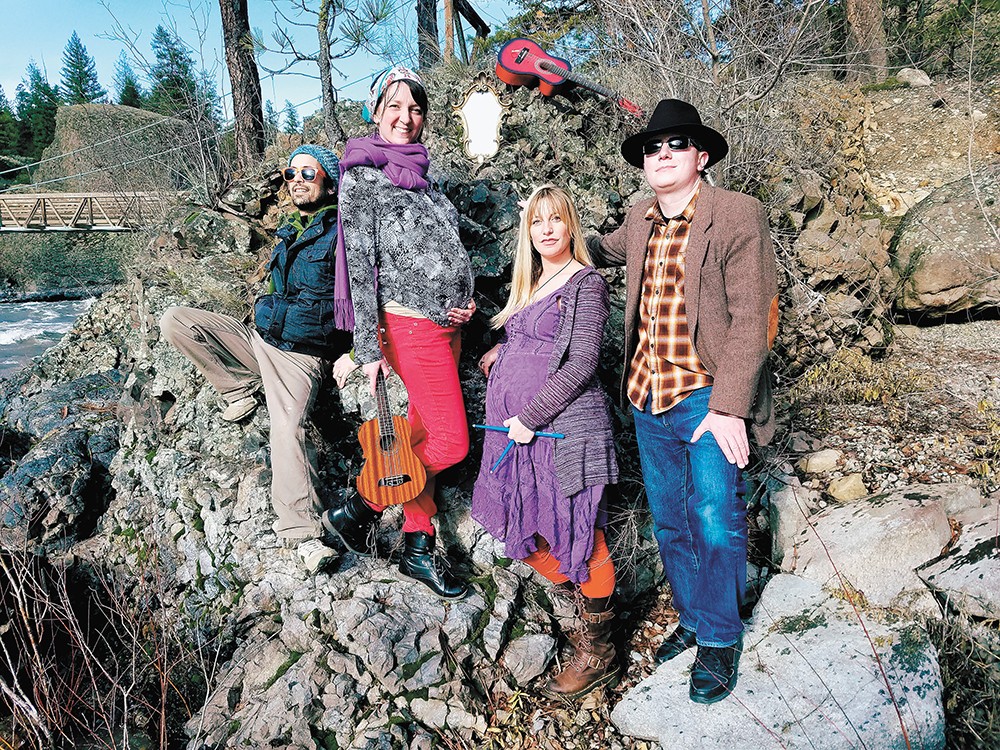 When Beyoncé performed at the Grammys last year,

five months pregnant with twins, it garnered global attention. But women pursuing their musical career while pregnant is not a new concept in the music industry: Celine Dion, Victoria Beckham, Björk and rapper M.I.A. have all continued to perform despite the potential limitations of a pregnancy.

Now Spokane has its own addition to that list: Atlas Hugged, a quartet born and bred in the Lilac City. The band is headed by Drew Blincow, currently six and a half months pregnant, alongside drummer and former Montessori teacher Heather Blondin, who is eight months pregnant.

The group, which formed in 2016, is set to drop their first studio album, Ultrasound, at Friday's Community Building show. Both women are expecting spring births.

"We are a truly sexy band," Blincow says, smiling.

The 10-track album is slated to have an accompanying graphic novel, which Blincow says should be finished soon after the album release. Blincow, a skilled artist and face painter, is the illustrator for the storyline. The graphic novel is set in the future and features a snake named Atlas. In this dreamscape, Atlas is watching television, which, in this world, is how everyone communicates and envisions the planet.

"In a way, we already sort of do that," Blincow says.

The track "Hypnotize" creates an audio experience that enhances the world Blincow has created in the graphic novel. With a Johnny Cash-like boom-chicka-boom beat paired with a psychedelic mixture of guitar and bass lines, the lyrical descriptions coincide with the book's futuristic story.

Blincow plans to release the multi-part graphic novel with future additions coinciding with other projects, and there is currently another album in planning stages.

Ultrasound also showcases the group's ability to highlight complex social issues, featuring two slam poetry-style tracks titled "Men" and "Women." Both tracks create a unity among genders that emphasizes the need for both masculinity and femininity. Blincow says that these tracks are especially relevant now.

"I've seen how it relaxes men into feeling okay about being themselves," Blincow says. "I feel like that is one of the most important things that we can do to heal the planet ... When people are perpetrating violence, it's because they're hurting the most ... So how do we start to undo that?"

Ultrasound also includes tracks that are inspired by childhood. Blondin's first daughter's favorite song currently is "Friends," which uses an incrementally sped-up beat to create an energetic and carefree track.

"We always have to have a song for bedtime, and that's the one for right now," Blondin says, laughing. "I'm sick of it."

As parents and soon-to-be parents, the members of Atlas Hugged have tried to make togetherness a priority for their message to the public. Guitarist Bradford Little says that fostering a sense of community is important, but having kids added a new dimension to the meaning of "responsibility."

"When you have kids, there's this weird dichotomy where you feel like you need to do something more responsible," Little says. "When really, there is nothing we have to do, except ... build community and love each other."

Bassist Matt Loi, who works in radio full-time at iHeartMedia, echoed that sentiment, saying the sense of community within the band runs deep.

"This is the first sense of real community that I've ever had. ... I haven't been able to find it in any other social group of any kind," Loi says.

The band agrees that music, beyond being mere entertainment, can be used as an incredible tool for empowering their audience.

"People are coming to your show on their free time, spending money to be not only entertained, but it's our job to empower people, to make them feel like they can do something creative to heal, dance a little bit, or be themselves," Blincow says.

Blondin agreed with a wide grin.

"We're gonna help the world with that," she says. "By raising good kids with good music." ♦

The original print version of this article was headlined "Birthing Beats"