More charter schools are on the way in Washington state, possibly signaling increased confidence that they won't be shut down 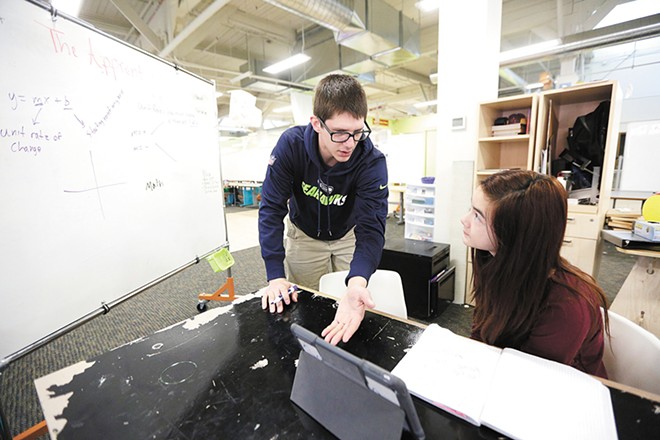 Young Kwak
At PRIDE Prep, one of Spokane's two charter schools, the waitlist is around 150.

Ever since charter schools were approved by a voter initiative five years ago,

they have been entangled in court battles about whether they're legal at all. Less than two years ago, the state Supreme Court ruled that they weren't.

But now, with plans for more charter schools in the state starting to emerge, there seems to be growing confidence that charters are here to stay. Lawmakers "fixed" the charter schools law after the Supreme Court's ruling, and this February, a King County judge ruled that the fix was, in fact, constitutional.

The decision has been appealed, but that's not stopping the current charter schools in Washington from expanding. And it's not stopping people like Jen Wickens from opening new ones.

"You can see the need and demand is there, and the law has now been fixed. We feel confident that we passed a challenging hurdle," Wickens says.

Wickens helped open Summit Public Schools in Seattle and Olympia, two of the first charter schools in the state. Now, she and Natalie Hester are co-founding a new charter school called Impact Elementary in Tukwila for the 2018-19 school year. Eventually, they hope to create a network of eight new charter schools across the state called Impact Public Schools. The project has been kickstarted by a $1 million grant from a fund partially funded by the Bill & Melinda Gates Foundation. The network would include four schools in the Puget Sound area and four in Eastern or Central Washington, says Wickens.

She says they waited to have a restored law in place before moving forward with the plan for Impact. The state has eight operating charter schools, and two more are planned to open in the Seattle area this fall. Along with Impact, Willow Public School in Walla Walla — a charter school — is scheduled to open in 2018.

With charter school roots digging deeper into Washington soil, it could be more difficult to uproot them with a court decision. But the Washington Education Association, the largest teachers union in the state and a top opponent of charter schools, still argues that the schools shouldn't be planted here at all.

"We still have huge concerns about privately run charter schools taking public money and not being accountable to taxpayers," says Rich Wood, spokesperson for the WEA. "That fundamental problem is still there, independent of any individual group or organization running them."

In Spokane, the two charter schools seemingly can't keep up with the demand.

At Spokane International Academy, there are around 400 students on the waitlist, even as it expands school grades next year, says founder Travis Franklin.

At PRIDE Prep, the waitlist is around 150, after the school expanded to serve 100 students per grade instead of 75. Next year, there will be 400 students throughout grades 6-9, says founder Brenda McDonald.

Both Franklin and McDonald say they would welcome more charter school choices in the area.

"If you ask any of us, it's exciting because we're going to need more schools and more leaders to help us — not in a bad way — but to help more people understand what charters are," Franklin says.

Both of Spokane's charter schools are stand-alone schools, not networks like Impact plans to be. Wickens says networks have the benefit of saving costs on administrative support, along with having common goals across a wider area. McDonald notes that networks typically have more resources at their disposal.

Wickens says that diversity, equity and inclusion are among Impact's core values. The school model is different than the traditional model. Students in kindergarten will keep the same teacher, or mentor, until fifth grade. But there will be other teachers; for example, students will attend a different project-based class during the day.

Wickens says the first school is opening in Tukwila in part to help close the achievement gap among the diverse population there. She says Impact wants to get to Eastern Washington, where she sees a similar demand, as quickly as possible.

"There's incredible demand from Central and Eastern Washington for parents and communities of color," Wickens says. "We're excited for Impact to meet their needs."

doesn't think there will be any competition if more charter schools open over the coming years. The eight Impact schools alone would double the number of charter schools which existed last year in Washington, but those won't be the only new schools.

"They will be part of a bigger mix," he says.

The law allows for 40 schools to open by 2021. D'Amelio says the focus should be on slow, steady growth, like the state has seen in the first three years. There are now 2,500 students enrolled in charter schools, double the number just two years ago.

Wood, with WEA, says he may have concerns about networks not being as accountable to the local community as a stand-alone school. Accountability, overall, is at the heart of why the union sees charter schools as illegal — they don't have elected school boards, yet they take public dollars. Whether it's five charter schools or 40 in the state, he doesn't see that changing.

"That was the basis of the original lawsuit, and it's still part of the fundamental legal point in the current case," Wood says.

McDonald, with PRIDE Prep, says the more charter schools exist, the more complicated closing them would become, should a judge decide they are unconstitutional. But the real goal, she says, is adding more school choice. That's why she welcomes any kind of charter school.

"I think replicating the same types of schools isn't the point," McDonald says. "I think we need to make sure that what we're doing is adding different options for families, and being purposeful about encouraging schools to open in our area." ♦

EDITOR'S NOTE: The number of students at PRIDE Prep has been updated since the newspaper published.