Generations after water quality and fish plummeted, tribes are fighting to restore a sacred resource 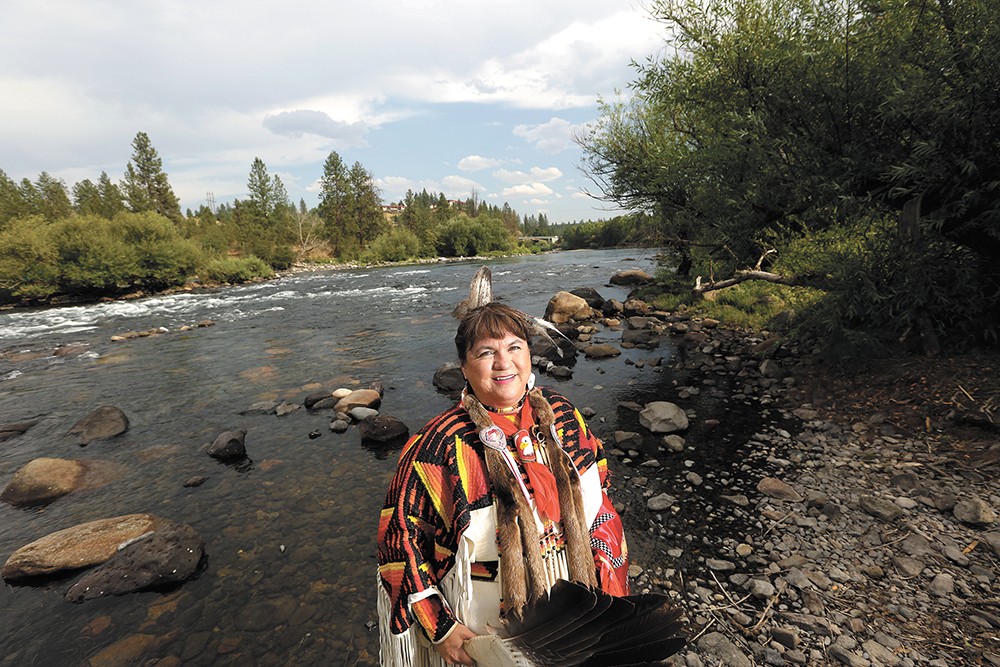 Young Kwak
Margo Hill: "If the tribes have higher water quality standards, it's really better for everybody."

Margo Hill's great-grandmother, Sadie Boyd, who lived to be 103, remembered how the Spokane River's mighty waters once rushed untamed by man-made dams.

She remembered the salmon for their sustenance, the living water for its help with trade.

Life for the three bands of the Spokane Tribe was so connected to the river that they were called the "salmon eaters" or another name in their native dialect that roughly translates to "pink-cheeked people," Hill says.

"Our identity, everything was connected to the river," says Hill, who served as a lawyer for the Spokane Tribe for more than 10 years, fighting for water quality and the right to a clean river. She now teaches urban and regional planning at Eastern Washington University. "The river, it gave us not only food, like the salmon and the eels and everything we needed for our sustenance, but it was also our trading."

The tribes traded clear to Montana, used reeds along the river bank to build homes, wore otter furs in wraps and braids and used shells for earrings, Hill says.

Then, the dams went in with a promise to provide power. But for members of regional tribes, they took power away.

As Hill's great-grandmother would tell her, the women wondered how they would feed their children after the fish runs all but stopped. Rations were sent to members of the Spokane Tribe, but early batches were filled with maggots.

Now, generations after the dams went in, after mining efforts in North Idaho and Eastern Washington dumped toxins straight into the river system and created cleanup projects that'll take more generations to finish, Hill and others continue to find meaning at the river's sacred places. The water is worth the fight.

"We're doing what we can to have higher water quality standards and protect habitat," Hill says.

One of the efforts she helped fight for as an attorney was the tribe's right to set its own water quality standards under the Clean Water Act.

For Hill, who has studied the history of her Spokane Tribe, and grew up speaking some of the language, what has been lost at the river is about more than food or water quality.

But now, for kids like her 19-year-old son, that opportunity isn't there any more.

Still, her children are picking up their own efforts to connect with the river and their history.

"I take them to the river to camp and that is really important," Hill says. "My kids just recently did a canoe journey, where they travelled in a canoe with the [Upper Columbia United Tribes]."

The six-day journey, in cedar canoes, was undertaken by members of the Spokane, Coeur d'Alene, Confederated Colville Tribes, Kalispel and Kootenai.

"They paddled up to Kettle Falls, which is where they had the Ceremony of Tears, where they commemorated how we used to fish there hundreds of years ago," Hill says. "We have hopes that, one day, maybe we can have salmon again." ♦