Get in the Van

Most bands head to big cities on tour, but locals Terrible Buttons spent the month of June with bears and beardsmen in Alaska 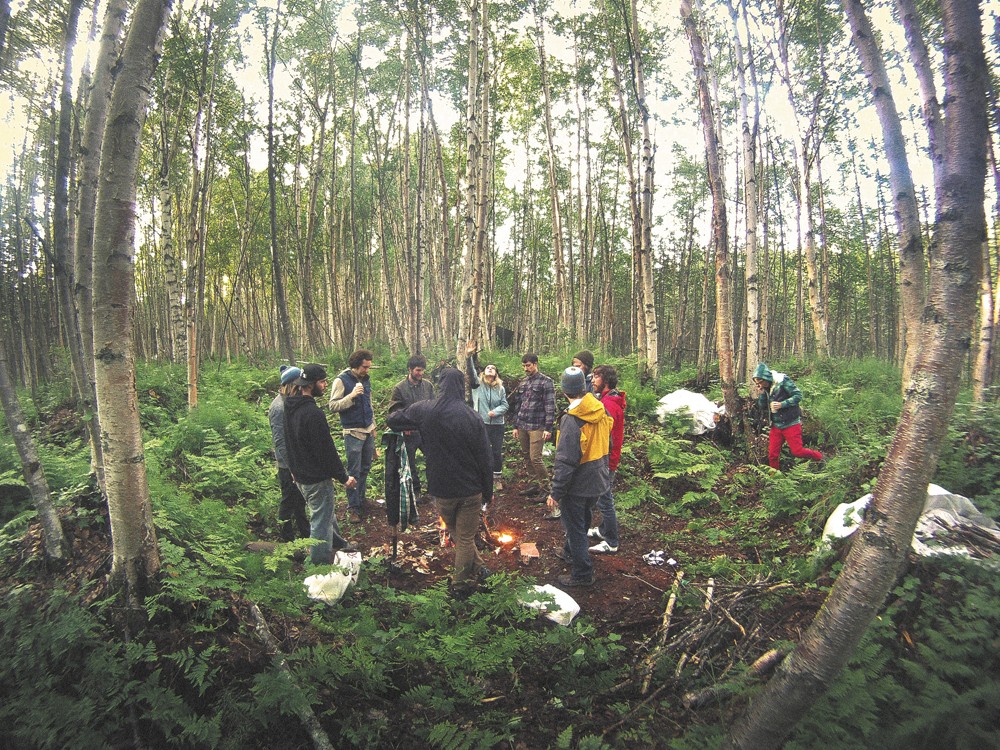 Kristen Black
Only a mere three hours after finishing a set here in Spokane, I piled into the van with my equally sleep deprived band mates, and headed out on an adventure that we hardly knew anything about, only hoping that we’d see some bears along the way.

Alaska turned out to be more than we could ask for. Everyone we met was ready to lend a hand no matter the task. At a mid-June, outdoor house show, the notoriously fickle Alaskan weather strikes, and rain started to pour. Someone ran into the woods to chop down a tree in order to secure an army parachute to protect everyone from the rain. The rain didn’t stand a chance. The show went on to be one of our favorite nights of the tour. In another city, a man hosted our band and crew, and then proceeded to cook us pancakes in the morning.

To my surprise, the bigger cities, had the least attentive, energetic audience. Fairbanks, the second-largest city we visited, was packed, but from what we could tell only six out of the 200 people there were actually listening — and one of our lone listeners was dragged out of the bar by her ponytail and G-string screaming. The first show in Anchorage was similar to a Spokane venue, but the people didn’t care, except the two girls hula-hooping. It seems that the bigger the city, the less genuine and the lower energy the crowd.

Our last show in Anchorage seemed to prove this point. The crowd was 90 percent people who had seen us in a different town and brought their friends, which was something amazing in and of itself, but it was the small town fans that made the show successful in Anchorage.

We found that the Alaskans we met were loyal in more ways than one. They love their state, the attitude, the bears, everything, but they are also loyal fans. They may not “like” you on Facebook, but they will drive hours to see a band that they first heard the night before.

Part of the vibe in Alaska is a result of the sunlight. Imagine 24 hours of sunlight. For an outsider, playing until three in the morning in a dark bar, and then stepping outside to noon-like daylight can really play tricks on your mind and sleep schedule. Yet, to Alaskans, summer is the victory lap after a marathon of winter — and that’s exactly how they treat it. Sure, people were toasting to us, but they were mostly toasting to the sun. They want to dance, and they do. They want to hula-hoop, and they do. They want to drink, and they really do. Simply put, they want to have a good time.

Because the crowds in general were so open to new music, and had their minds set to have a good time, we found that we enjoyed ourselves more. We fed off their energy, and they fed off ours. It is that symbiotic relationship that led to incredibly enjoyable shows on tour.

The consistently receptive crowds made these shows special. If the night only drew in 24 people, it didn’t matter like it does in the lower 48 because everyone there was attentive, receptive and thankful that new music had come to their town.

Playing to strangers lies in a different realm than playing to familiar faces, though each has value. But there’s something different about playing to faces you recognize, and friends singing the words of the songs they’ve hear dozens of times.

So, even though Alaska was everything I could ask for from a tour, it was good to see the city lights of Spokane again — not to mention that it was dark for the first time in 20 days.

Read more about their Alaskan adventures in our “Bands in Vans” series on Inlander.com.