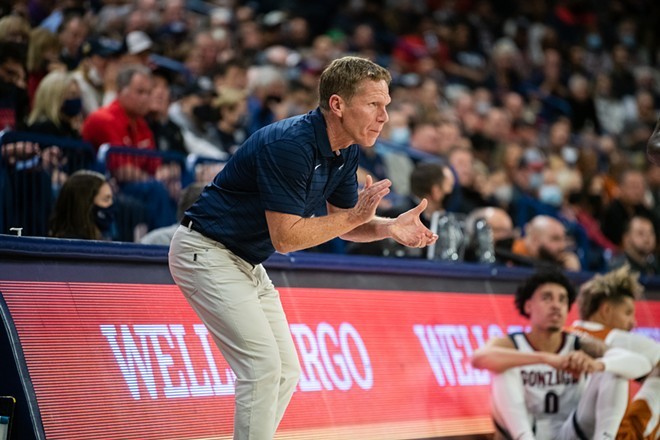 Erick Doxey
Mark Few leads the Zags to Las Vegas a little early this season for a series of potentially great games.

The Zags sit at 4-0 on the season with a big win to their name and a few other blowouts as well. They’re ranked No. 1 in the country as they have been for the past season-plus. So far, they’ve proven worthy of that ranking. This week, we will learn definitively whether or not Gonzaga does in fact deserve the top spot in the polls.

No. 1-ranked Gonzaga faces off against No. 2-ranked UCLA and No. 7-ranked Duke this week, with both games coming at Las Vegas’ flashy new T-Mobile Arena, home to the NHL’s Vegas Golden Knights. Oh, and they play a team from Michigan there, too.

Get to know the Zags’ opponents in what should be an incredibly entertaining Thanksgiving week of basketball.

Central Michigan is 1-2 on the season with understandable losses to power conference teams in DePaul and Missouri, as well as a win against an Eastern Illinois program that has spent two decades being beyond irrelevant. The Chippewas’ résumé is as you would expect: lacking. Gonzaga should eat them up like the first course that they are and emerge ready for the heartier fare.

Gonzaga and UCLA met last March in a Final Four thriller that immediately became one of the greatest games in NCAA Tournament history. It was back and forth throughout between the 1-seed Gonzaga and Cinderella 11-seed UCLA. The game went to overtime, and Jalen Suggs sank a three-pointer from mid-court at the buzzer to give Gonzaga the win.

It was instantly recognized as an all-time classic game in college basketball.

Fortunately for fans, we knew then that we’d get a rematch the following season. Now, as they were then, No. 1 Gonzaga will take on No. 2 UCLA in one of the marquee matchups of the nonconference season.

UCLA came into the season No. 2 in the AP Poll, behind Gonzaga, and the Bruins have sat there over the first few weeks of the season. They took down then-No. 4 Villanova in overtime, 86-77, but have otherwise beat up on a schedule of lackluster teams. Very much like the Zags, who a day after UCLA’s big win over Villanova demolished their only legitimate competition to date, then-No. 5 Texas.

The Bruins return the core of the team from last season that Zag fans should remember. Johnny Juzang (21.5 points per game) lit it up against the Zags last season, and he’s been rumbling down the same path so far this year. Jaime Jaquez (18 points per game, 7.5 rebounds per game) has followed suit as well. UCLA owns one of the sport’s most potent and efficient offenses.

Last year, the Bruins got hot at exactly the right time. So far this season, they’ve led us to believe that wasn’t a flash in the pan. The pan is still hot, and they’re cooking.

Perhaps no program is as impactful and as divisive as Duke. A college basketball blue blood that is constantly near the top of the sport, Duke is a team that simply exudes power… Except for last season, when they failed to make the NCAA Tournament for the first time since 1995.

Head coach Mike Krzyzewski is in his 42nd and final season leading Duke. He’s won five NCAA Tournaments and three gold medals leading the U.S. men’s national team. It’s between him and UCLA’s John Wooden for best college coach of all time, and both have a legitimate case for best basketball coach ever, period, regardless of the level at which they coached. Needless to say, Coach K’s retirement tour is a big story in the sport this season. Arguably it’s the biggest.

And it’s not just because of him. Duke sucked last year, and missed the NCAA Tournament, but they’re back where they normally are this season. Led by freshman phenom Paolo Banchero (15.8 points and 8.0 rebounds per game), the Blue Devils once again boast a star-studded roster. Diehard Zag fans should remember Banchero, who hails from Seattle, as he was courted intensely by the Zags and even considered Gonzaga as one of his final options before ultimately committing to Duke.

That says as much about Banchero’s talent — he was being recruited by Duke and Gonzaga — as it does about where Gonzaga’s at these days — Gonzaga thought it could land a Duke prospect. In the end, he chose Duke, and Gonzaga wasn’t all that bothered.

Entering this game the Blue Devils will have a win over Kentucky, another blue-blooded stalwart of the sport that is, like Duke, coming off an abysmal season that saw them miss the NCAA Tournament. Like Duke, Kentucky is expected to be much better this year. But, that’s Duke’s only game of note prior to the Gonzaga game. Both teams are coming into this week with one win over a good team and a handful of relatively meaningless games. Now, Gonzaga will play UCLA a few days before meeting Duke, which will change that equation significantly, win or lose. Duke, on the other hand, won’t be playing any meaningful games between press time and tipoff against the Zags.