Go Forth on the Fourth

Where to celebrate freedom, patriotism and America in the Inland Northwest 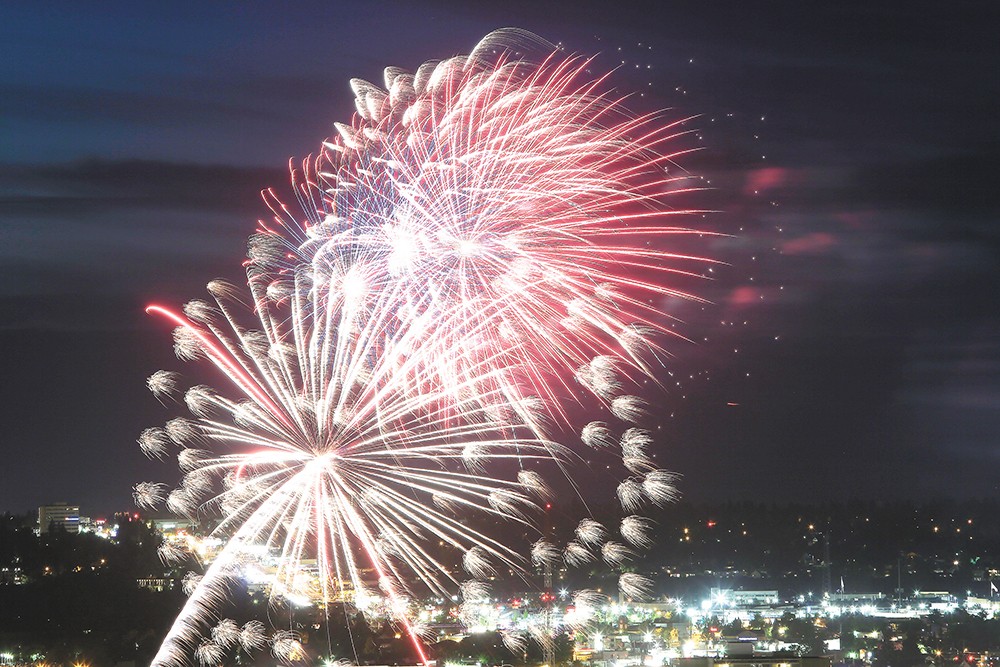 Riverfront Park comes alive with the sound of live music, food vendors and carnival games starting at noon on Tuesday. Get your fill of No-Li Brewhouse's signature ales at a beer garden in the park, where they'll be serving the Red White and No-Li pale ale, and then find a good spot before the fireworks show at 10 pm. Some preferable locations outside the park include the Spokane Arena parking lot or the Gonzaga University baseball complex, where the Spokane Indians' evening fireworks show can also be seen.

The Lake City's American Heroes Parade begins at 10 am, an hour earlier than previous years, on Sherman Avenue through the heart of downtown. Coeur d'Alene City Park and its beachfront also are host to family-friendly games and food vendors for an all-day festival, before North Idaho's largest fireworks display over the lake at 10 pm. For a more intimate celebration, consider attending the Coeur d'Alene Resort's Steaks N' Sparklers, where guests can enjoy private deck seating on the lake with a barbeque dinner buffet ($80/adults, $35/ages 3-12). Dinner is served at 7 pm, and is preceded by a cocktail party at 6.

Moscow Parks and Recreation hosts its community Independence Day celebration starting at noon in downtown's Friendship Square. After presenting the colors, the Pledge of Allegiance, the Star-Spangled Banner and a reading of the Declaration of Independence, the area's most patriotic pups can face off in the annual Mutt Strut, where the best-dressed dogs can win prizes. The event is free to attend, and free popsicles will be distributed to attendees. (While Moscow doesn't have its own fireworks show, folks can take a quick trip across the state line to enjoy traditional pyrotechnics at Pullman's Sunnyside Park.)

All the usual boating, camping, fishing and historical activities continue through Grand Coulee Dam's annual two-day weekend festival, this year on June 30 and July 1. Two days of arts, food and live outdoor music entertain thousands at the event. Fireworks are launched from the top of the dam immediately following the nightly laser light show on Saturday night.

A children's parade at 9 am kicks off festivities, followed by the grand parade at 10. The parade loops through Sandpoint's downtown core, finishing where it started. Live music and a raffle follow at City Beach through the afternoon. Before the fireworks show at dusk, find live music at the 219 Lounge (219 N. First Ave.), which hosts local group Harold's IGA at 8:30. ♦