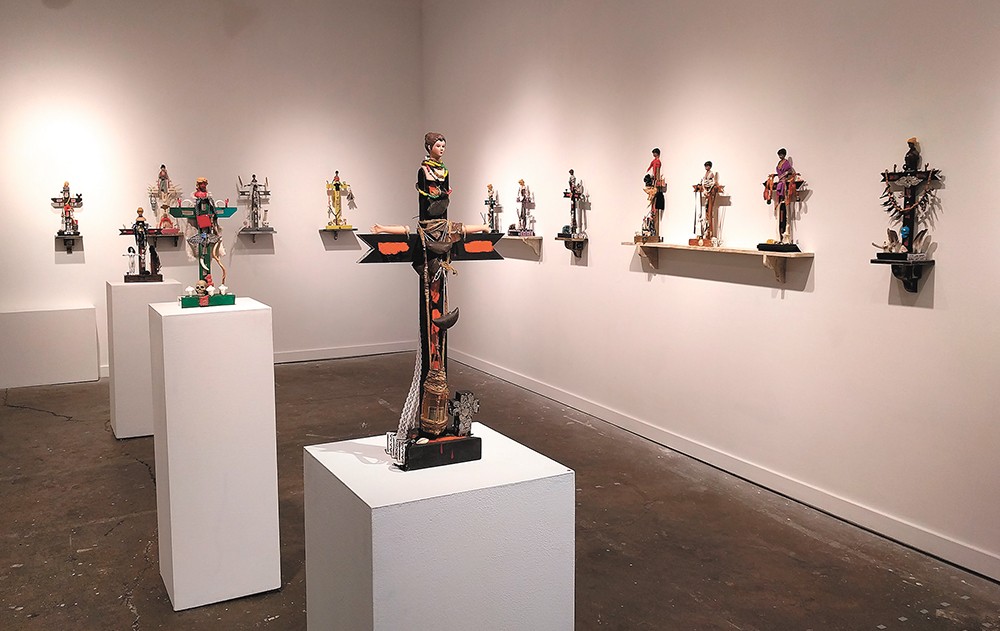 Ross Coates is a collector

and always has been.

Trinkets and doodads and cast-aside relics; a menagerie of miscellaneous ephemera — another man's trash, even — unite as a curiously coherent collection in the 84-year-old artist's latest show, Mary Crosses.

More than two dozen of the Moscow, Idaho-based artist's mixed-media assemblages he calls "Mary Crosses" are on display together for the first time. The solo exhibition at the Kolva-Sullivan Gallery in downtown Spokane runs through January 27.

Coates' name for the collection is indeed a nod to Christianity's mother of Jesus, yet his art's true intent is to pay homage to female deities, icons and goddesses that have existed in life or lore across cultures and religions of the world. Coates chose the Latin-style crucifix most associated with Christianity as the basis for each assemblage, he explains, because of its universal and ancient uses pre-dating European Christianity. 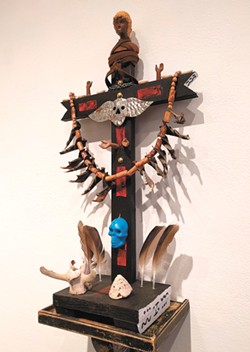 Chey Scott
A closer look at one of Coates' pieces.

Each Mary Cross is named after a goddess recognized at some point in history, or still today. There's Daurani, a South American "mother of the forest," and Macha, an ancient Irish goddess associated with horses and war. Representative of these feminine personas, each cross features a porcelain or plastic doll head atop its vertical apex. Beneath, items Coates has collected throughout his life and world travels are thoughtfully placed and hung: colorful ribbons, African carvings, Mexican prayer charms, vials of Chinese healing elixirs, animal bones and upcycled pieces of his previous art creations.

"You somehow have to find little things that will attach or relate to another little thing," Coates explains, adding that he makes a point to include elements from the natural world in each piece.

"I can't think of them as being all mechanical," he says.

The first Mary Cross emerged in 2008, after Coates found a painted wooden crucifix at a Boise yard sale, embellished with the names of the seven deadly sins. He's been making several of the sculptures each year since then, gradually piecing them together in his home studio until he's satisfied with the result.

Though the now-retired artist spends most of his time reading, creating art and "tinkering" — as his wife Marilyn Lysohir, an established ceramicist, says — Coates' illustrious art career includes more than a decade as chair of Washington State University's Fine Arts Department. His work has been displayed around the world.

The way Lysohir sees it, the Mary Crosses present a thematic summation of Coates' art philosophy, his personality and his lifelong growth as a creative storyteller.

"In a way, from the 1960s to what he's doing now is kind of the same thing," she reflects. "He finds things and reintroduces it, and embellishes it and has fun. I see these as fun — it's like exploring what little things that you find, and where to put them on the cross. It's an adventure." ♦