Because it’s so popular right now, we went in search of mac and cheese in all its forms 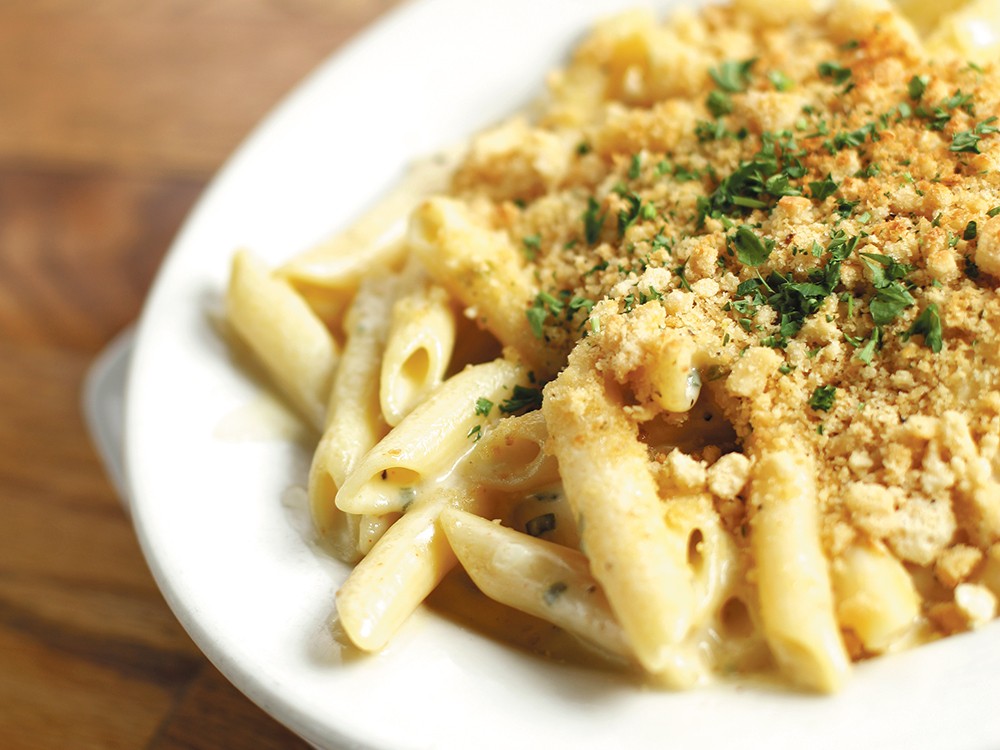 Young Kwak
The Onion\'s epicurean mac and cheese is a lot more than you\'d find in a box.

One of the more peculiar (but certainly welcomed) culinary trends of the past decade has been macaroni and cheese’s ascension from make-from-a-box pacifier for picky young eaters to a staple of hip restaurant menus. We’ve swooned over mac and cheese dishes in these pages before, but now we went in search of places that are taking this seemingly simple dish and turning it on its head. What did we learn? Well, for one thing, there’s no wrong way to consume mac and cheese.

You don’t need a fork for this mac and cheese — which is serendipitous, because you’ll very likely eat them out on the sidewalk right after the folks at the Couple of Chefs food truck hand your order out the window. (Follow them on Facebook or Twitter to find out where they’re parked each day.) The cheesy aroma will start wafting out of the paper bag, and you’ll open it to find breaded mac and cheese balls, fried crisp on the outside and gooey on the inside. The plump noodles are bathed in a light-colored cheese sauce infused with smoky bacon and jalapeño flavor. It’s like gourmet fairgrounds food without the stick.

The standard serving of six balls is filling enough for a lunch, but probably not nutritionally recommended. It’s either a shame or a blessing they don’t have late-night hours, because who among the late-night bar crowd could stumble across a truck bearing fried mac and cheese balls and resist? (LISA WAANANEN)

When I’m feeling like mac and cheese and am not currently caring about the size of my waist, I’m usually thinking of a classic version of the dish. The type that might have come out of my Grandma’s oven: spare on the extras, classic cheeses, a little crunch on top. No fuss, no muss. At Famous Ed’s, a South Hill sports bar, you’ll find three versions of mac: Famous Ed’s, bacon and meat sauce and Buffalo chicken. The one named for the restaurant is a giant bowl of baked cheesy goodness that’s baked to a crisp on the surface. The four-cheese sauce that holds it together relies on classic cheeses, like provolone and cheddar, to give the dish its nuanced, sharp flavor. It’s not stringy or ridiculously fancy — just a good solid mac and cheese. While other restaurants in town might be trying to put their mark on this tried-and-true dish, Famous Ed’s delivers a simple, reliable version that you can enjoy with a pint of beer and feel really, really full at the end. (LEAH SOTTILE)

First, a confession: I’m a 20-something adult and I still eat Kraft’s character-shaped, boxed macaroni and cheese a minimum of once a week. It’s not only a happy food memory from childhood — for anyone who devoured the stuff as a kid — but most obviously the stuff tastes damn good. Now take what you remember about the powdered-cheese-mix mac, notch it up about 20 times, and you’ll get The Onion’s sinfully rich and tangy Epicurean Mac & Cheese. It’s really not even fair to compare the two in the same category of epic-ness. The cheese gods had their heads in the game when they thought up this indulgent dish of baked penne pasta in a thick, creamy sauce of Brie, Asiago, and American cheeses. Topping off this mind-blowing combination is an Asiago-flavored panko crust, adding a welcome crunch to the mix. My guest and I both ordered this menu favorite so we could compare opinions, and because we both consider ourselves serious mac ‘n’ cheese enthusiasts. I ate mine slowly to savor each blissfully creamy bite, while not more than 10 minutes after our food had arrived, my guest’s plate was scraped clean. (CHEY SCOTT)

Meltz, a grilled cheese joint located off of Kathleen Avenue in Coeur d’Alene, serves mac and cheese in an interesting way — grilled between two slices of bread and loaded with pulled pork, bacon, and fried onions. The Oinker crosses the line between traditional home cooking and an adventure, combining two comfort foods — grilled cheese and macaroni. The taste is balanced and rich, with barbeque and smoky cheddar cheese melting into crunchy sourdough. You can also get these bad boys grilled on a variety of breads (sourdough is the best). Their homemade potato chips are seasoned perfection and baked-daily cookies call a sweet end to the meal. The result is an almost ambrosia-like tummy-filler that will keep you happy for the afternoon. Also try a cornucopia of unique and funky grilled cheese sandwiches, from a creation containing potstickers to one featuring mashed potatoes. (SARAH MUNDS)

Zola’s happy hour is one of the most popular in all of downtown Spokane, and while the $1.50 beers don’t hurt, there’s a good crowd that comes for the bar’s mac and cheese. This creation is one of the rare styles of this dish that uses high-end ingredients without abandoning the comfort-food appeal. The penne pasta is topped with a creamy sauce made from gouda and cheddar cheeses, so thick and rich that it coats the inside of your mouth in the way that any cheese-lover will appreciate. Then it’s topped with hickory smoked bacon, but if you want to go veggie, you can go without. Owner Jeff Short says the mac and cheese is one of the restaurant’s all-around best sellers. After just one bite, you’ll know why. You’ll also know that you don’t want to share it. (MIKE BOOKEY)