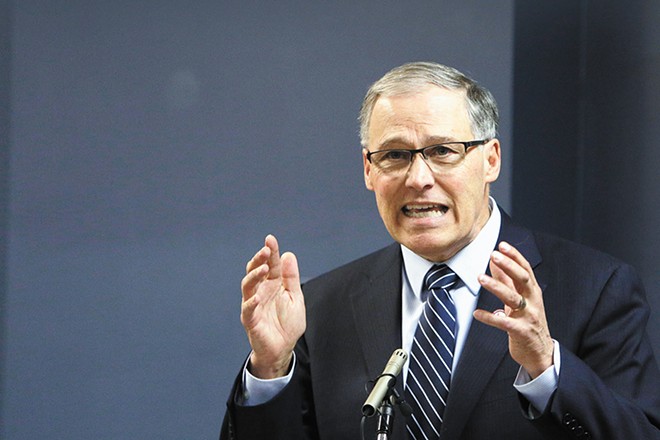 With his eye on a potential presidential campaign, Washington Gov. Jay Inslee already has made plenty of national headlines in 2019. Since the New Year, Inslee has announced he'd be pardoning thousands of marijuana convictions. He's proposed remaking the state's financial aid system, aiming to make college effectively free for low-income students.

But maybe his most dramatic proposal came last week, when Inslee proposed a health care innovation he's calling "Cascade Care" — reminiscent of the "public option" proposals that were cut from Obamacare in 2010, back when Inslee was still in Congress.

Inslee's "Cascade Care" public option plan, however, wouldn't create a state-run insurance agency. Nor would it expand Medicaid. Instead, it would make the Inslee administration an insurance negotiator, tasking it with picking at least one insurer to offer Obamacare exchange coverage for the entire state. By wielding its powerful bargaining power, the argument goes, the state government could drive down prices, cap reimbursement rates and expand access in the individual market.

"This public option will ensure consumers in every part of the state will have an option for high-quality, affordable coverage," Inslee said at a press conference last week.

Ideally, Inslee argues, the constraints of Cascade Care, combined with a host of subsidies, would drive down health care costs and calm the state's shaky insurance market. Yet even with the strongest Democratic majority in Washington state since 2010, it's a tough sell: Lobbyists for the powerful medical and insurance industries are wary.

Versions of a "public option" have been proposed by health care wonks for over a decade. But a proposal like Inslee's has never been tested — not in Washington or anywhere else.

"It's a bit of a unicorn," says Larry Levitt, health care expert with the Kaiser Family Foundation. "This is uncharted territory, at least in the private insurance market."

And the last time Washington state tried to make a big change to its health care system? It didn't go so well.

Back in 1992, Washington state launched a radical overhaul of the state's health care. In many ways, it was like the state had piloted Obamacare, two decades earlier. State Democrats expanded the state's Medicaid program, banned insurers from discriminating because of pre-existing conditions and featured an individual mandate requiring people to purchase insurance.

But voters rebelled: The next year, they booted Democrats from power, electing Republicans who promised to nix the most unpopular parts of the bill, like that individual mandate. But without a mandate to force them into the market, a lot of young healthy people opted not to buy insurance. Most of the people left on the individual market were old and sick people, the exact kinds of people who were the most expensive to insure — driving up premium costs.

Washington state was in the dreaded death spiral: By the time 1999 rolled around, the Seattle Times reported, not a single insurer in the state was offering individual coverage.

So when President Barack Obama's Affordable Care Act passed a decade later, experts hammered home how crucial the individual mandate was to keeping the system afloat.

But in 2017, while Republicans failed to undo the Affordable Care Act, their tax bill effectively eliminated the individual mandate. Washington state risked a repeat of the 1990s, at a time when the state's health insurance marketplace hasn't exactly been thriving.

"Right now, we have 14 counties in the state that have only one insurer," says Inslee health care advisor Jason McGill. Typically, the individual market is sicker or older — and more risky to insure. In 2017, the state's insurance commissioner had to scramble to find any individual market insurers willing to serve Klickitat or Grays Harbor counties.

For now, thanks to federal health care subsidies, there's been no apparent death spiral. But there have been concerning signs.

"For the first time this year, we are seeing our uninsured rate blip up," says McGill. "We have gaps in the system still. It's going backward."

For the governor, McGill says, the loss of the individual mandate was a catalytic event.

"Under the Obama administration and the Affordable Care Act, Washington was able to make tremendous progress in expanding coverage and start bringing down costs in our health care system," Inslee said at last week's press conference. "Under the Trump administration, all that progress is at risk."

Office of the Governor photo
Jay Inslee argues that many counties in Washington state are "on the knife's edge" of losing health-care coverage at a press conference announcing a "public option" this month.

Under Inslee's plan, the state would put out the call for bids for insurance companies to offer plans to the individual market. Anyone could apply, but with some major caveats. An insurer who partners with Cascade Care would have to cover the entire state, not just a handful of select counties. The health insurance policies would need to meet a litany of standards intended to decrease out-of-pocket costs and increase transparency.

And, crucially, the hospitals and doctors would only get paid as much as Medicare would pay them.

(Still, Medicare, the federal health care program for seniors, pays more than the rock-bottom reimbursement rates of Medicaid, which pays for health care for the lowest-income individuals.)

After all, the state will have to convince insurers and providers to jump on board.

"I'd expect skepticism across the board from the health care industry," Levitt says.

So far, lobbyists for insurance and hospital industries in Washington state haven't taken a position, saying they're waiting to see the details of the bill. But they're uneasy, worried that Inslee's plan to calm the marketplace may destabilize it instead.

"The concern that we have is that the Medicare rate is unsustainable. It does not pay for the cost of care," says Chelene Whiteaker, VP of government affairs for the Washington State Hospital Association. "Rural hospitals will have significant difficulty providing care to patients, while they're trying to absorb patients from the public option plan."

Having insurance doesn't do much good if doctors refuse to take it.

"At the end of the day, we want patients to have not only health coverage, but health access," says Whiteaker.

But that's where the advantage of having the state as the negotiator comes in. Think about how Walmart is able to demand crazy low prices from their suppliers, thanks to its sheer domination of the market. If you tell Walmart no, you can say goodbye to a huge chunk of your business. Medicare works the same way, Levitt says.

"Hospitals can't possibly walk away from Medicare, because it's too much business and revenue," Levitt explains.

So if it comes down to it, McGill says, the state can throw its weight around: It could require that any insurer or provider who wants to serve state or public school employees also has to serve those on the Cascade Care exchange.

"We intend to use our purchasing power if we need to," McGill says.

Yet there's another risk: Instead of reducing overall health care costs, the public option could simply shift the cost from the individual market to the rest of the private insurance market.

"If a health system is facing significant loss for the new program, the question is who is going to help make up that loss?" Whiteaker says.

"The economic theory suggests that if providers could charge those higher prices to payers, they would do that anyway," Levitt says. "The evidence is pretty mixed. It really depends on the market."

But Joe Schmick, Republican on the Washington state House Health Care and Wellness Committee, doesn't have any doubt.

"One thing is absolutely clear," he says, "this will raise costs."

Democratic Senate Majority Leader Andy Billig argues that a public option isn't unprecedented in Washington state: He points to the Basic Health Plan, a subsidized government-run insurance program that helped low-income Washington residents until 2014. Arguably, as a "public option," it was even more radical, involving more direct government control than Cascade Care would include.

"One of the lessons from the previous public option was that it worked and it was popular," Billig says.

Yet during the recession, Washington state repeatedly struggled to pay for its Basic Health subsidies.

Inslee's plan calls for funding subsidies to ensure that nobody on Cascade Care is spending more than 10 percent of their income on health care insurance premiums. But so far, Schmick argues, there's no fiscal note, no explicit price tag and no clear plan for how those subsidies would be paid for.

"We just have to be very clear that this is going to cost more money," Schmick says.

Ultimately, the political battle isn't just about Inslee's plan. It's over what it will lead to. When Schmick hears Inslee talk about "health care for all," he interprets it as Inslee saying that Cascade Care is just one step on the way to a government-controlled health care system. And that, Schmick argues, would be a disaster.

"Vermont? They tried single-payer, abandoned it. In North Carolina, to go to Medicare for All, they found it would have ended up doubling our state budget," Schmick says. "As a general rule, I know my constituents are not in favor of universal health care." ♦

The original print version of this article was headlined "Medical Experiment"