Great Scott: The Spokane Symphony will screen Back to the Future, complete with a live performance of its score 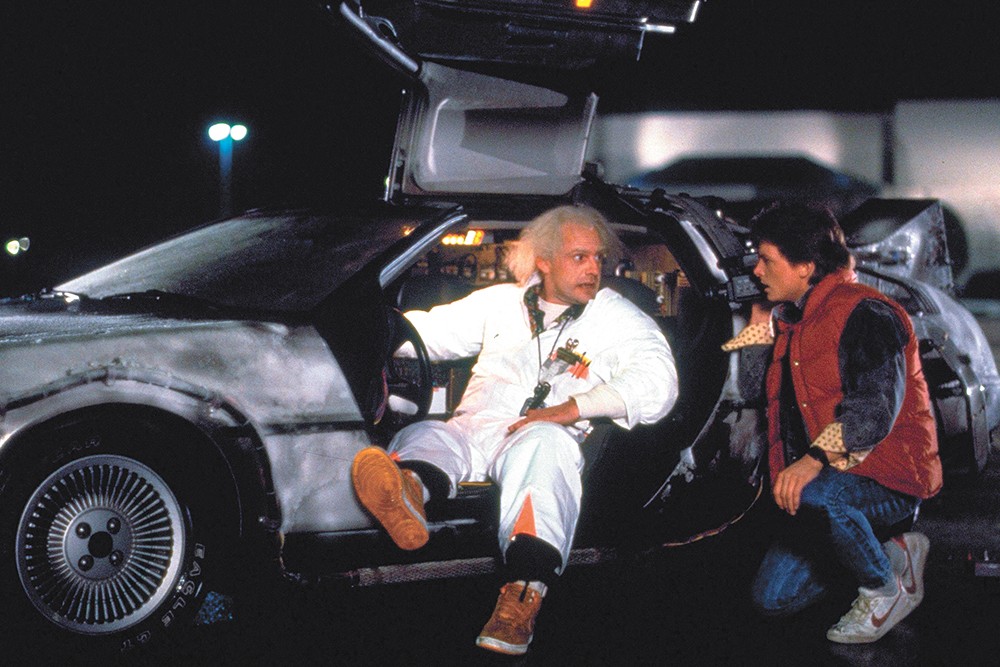 Maybe you saw the DeLorean parked near the front entrance of River Park Square earlier this week, and maybe the musical theme from Back to the Future flitted through your head when you did. With its winged doors and stainless steel exterior, the long-defunct luxury car is one of the many iconic visual signifiers of the 1985 time-travel comedy, one of the most beloved blockbusters of its era.

Part of the film's appeal is the charisma of Michael J. Fox as teenage rebel Marty McFly and Christopher Lloyd as mad scientist Doc Brown, as is the craftiness of the Oscar-nominated script by Bob Gale and director Robert Zemeckis. But Alan Silvestri's rousing musical score also does a lot of heavy lifting, and it makes Marty's leaps from the '80s to the '50s and back again all the more thrilling.

On Friday night, the Spokane Symphony will be screening Back to the Future, with a live performance of Silvestri's swashbuckling score accompanying the film. The orchestra will be led by guest conductor Constantine Kitsopoulos, who has, per his own description, "done a little bit of everything."

Currently based in New Jersey, Kitsopoulos has been a music director of several symphonies and has conducted orchestras on Broadway. But he has also made a second career out of concerts set to films: He has traveled the country conducting the scores for the Star Wars and Harry Potter movies, as well as classics like The Wizard of Oz, An American in Paris and Vertigo.

Back to the Future has become a popular selection of those live symphonic screenings, but Kitsopoulos says he had never actually seen Zemeckis' film until he started studying it. But in prepping for a concert of this type, you're required to watch the movie over and over again, and now he's seen it countless times.

"Every time I look at the film, I notice something different, or I hear a different line and think 'Oh, that's what that means,'" Kitsopoulos says. "The challenge is to make it fresh every time, and if you're always looking for new things that you didn't notice before, that's part of the fun of it."

Of course, there are inherent challenges in performing live music, but those are further complicated when what the orchestra is playing has to synch up with visuals.

"You have to be on your toes all the time," Kitsopoulos says. "The movie doesn't stop for anything. The music is very specific. If there's a big moment in the music that's supposed to punctuate an explosion or somebody slamming a door, that's got to be synchronized. If the event happens visually and you're early or you're late, the audience knows it right away."

As for the enduring legacy of the film, Kitsopoulos names all the obvious reasons — its actors and its humor and all the historical callouts. But it's the more poignant thematic threads of the story that make it — pardon the pun — timeless.

"Michael J. Fox goes back in time and learns things about his mother and father that he couldn't imagine could be anywhere close to the truth," he says. "I have two kids that are both off on their own and married, but every once in a while, my wife and I will be talking [with them] and my daughter will say, 'I didn't know that about you.' ... That's why Back to the Future is played on TV over and over again, or why people come to see a symphony orchestra play the score with the movie projected."

An event like this is also an ideal gateway to the magic of the symphony, he says: "It's a great way to see a movie, and more importantly for the [symphony], a great way to introduce kids to the sound of a live orchestra." ♦

The original print version of this article was headlined "Future Sounds"