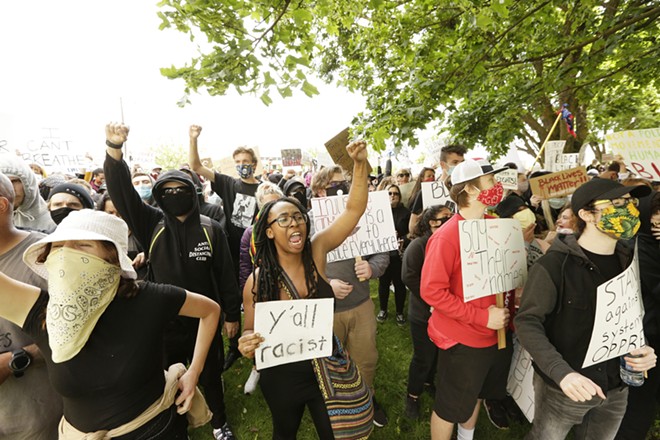 Together, they praised the peaceful protestors earlier from the afternoon. Woodward credited local NAACP president Kurtis Robinson from the local NAACP for helping de-escalate the situations and law enforcement for their restraint — even kneeling in solidarity with George Floyd. 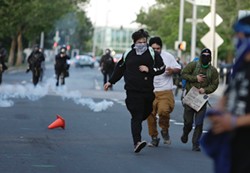 But after 6 pm, Woodward said, the climate of the protest changed.

Meidl said a group of about 500 left the courthouse protest and started walking to the downtown area. But once the protesters got down to the mall downtown, some began looting buildings and breaking windows.

“We’ve had officers that have had objects thrown at them. We have officers that have been assaulted as well. We still have several hundred people who are refusing to disperse,” Meidl said. “We’re asking folks to stay out of downtown.”

Workers preemptively boarding up storefronts in downtown Spokane now. This is at Williams Sonoma pic.twitter.com/AB50NmAHXe 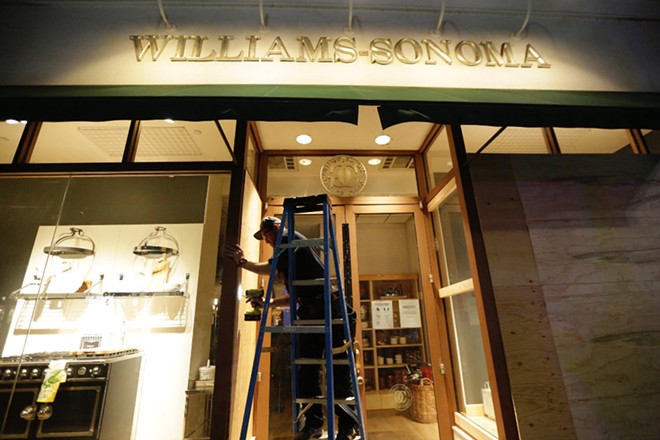 Young Kwak photo
A worker boards up windows at the downtown Williams-Sonoma, hoping to deter vandals.

UPDATED AT 9:12 PM: Spokane Mayor Nadine Woodward has enacted a curfew in downtown Spokane until 5 am tomorrow morning. The order is in effect from Division to Maple and Fifth to Boone. In the city's statement, officials distinguished between protesters who had rallied in the afternoon and done so peacefully and what they are identifying as a "second, separate group" that they say "become aggressive downtown after the local protest largely ended."

Additionally, Spokane County commissioners and the sheriff have contacted the governor's office requesting assistance from the National Guard. 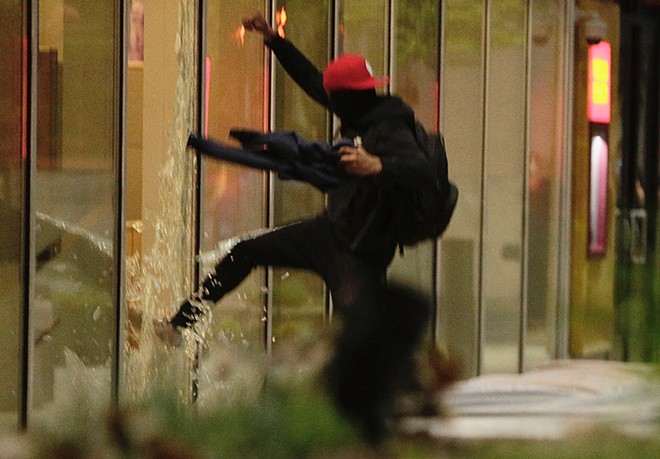 Young Kwak photo
A man breaks a window at the Wells Fargo building on West First in downtown and is chased away by protesters.

UPDATED 8:15 PM: Spokane police sent out an alert shortly before 8 pm, reporting a civil disturbance in the downtown core. The Nike store had been looted, and police began to focus on protesters in Riverfront Park. Staff reporter Samantha Wolhfeil and staff photographer Young Kwak are reporting from the scene as the situation continues to develop.


As soon as someone smashed this window the whole crowd rushed him and said to stop. The man in this photo was NOT the person who broke the window #spokane pic.twitter.com/DrD4evbpVA

Crowd ran away as the flash bangs echoed down Riverside in Spokane pic.twitter.com/f8HcxViunI

A second group downtown Spokane is at Howard and Riverside. Just got here but we hear tear gas has been launched here as well pic.twitter.com/vrMQMkvcgU

Lots out with milk in downtown Spokane to help with tear gas pic.twitter.com/nM5ftZBd8E

Some taking barricades to set up their own line in downtown Spokane pic.twitter.com/NtVBdhiydp

Thousands of protesters flooded into downtown Spokane this afternoon to call attention to police violence after George Floyd, an unarmed 46-year-old black man in Minneapolis, died on Monday after a white officer kneeled on Floyd’s neck.

Local organizers have urged protesters to remain peaceful. In other communities, including Seattle, protests have turned into riots with looting and violent confrontations with police. Gov. Jay Inslee has activated members of the National Guard in response to a request from the city of Seattle.

Spokane’s demonstration started today with a gathering near the Red Wagon in Riverfront Park. Devon Wilson, with the local NAACP, addressed the crowd: "I am horrified that this would happen. If a man wants to kill me, that’s his problem. But if he has the power to lynch me, that’s my problem. ... We are here today to say no more. No more. Never again."

Later, people marched from Riverfront Park to the Spokane County Courthouse, where the crowd gathered behind a police-tape line with chants of “black lives matter” and other calls for justice.

Shortly after, people pushed through the tape to go talk with officers who were holding a line near the Public Safety Building. Many were shouting, upset that officers were already in tactical gear for the peaceful protest.

“There is no riot here, why are you in riot gear?”

After another group of officers in more extensive tactical gear formed another line, the crowd got loud, shouting more, and eventually the officers retreated back into the courtyard, with the crowd soon to follow.

For more than an hour, the crowd kept shouting in bursts, chanting phrases like “his name was George Floyd,” “White silence is violence” and “Black lives matter.”

Some demonstrators lay prone on their stomachs with their hands behind their backs. Later, one young man of color moved along the line, looking each officer in the face and saying, “Eye to eye, I wanna let you know I love you and I appreciate you. Thank you for your service. Please don’t kill my people.”

The crowd was still holding in place by 4:15, a few hours after the 2 pm protest started. When some officers kneeled in solidarity with protesters, the crowd erupted in cheers. 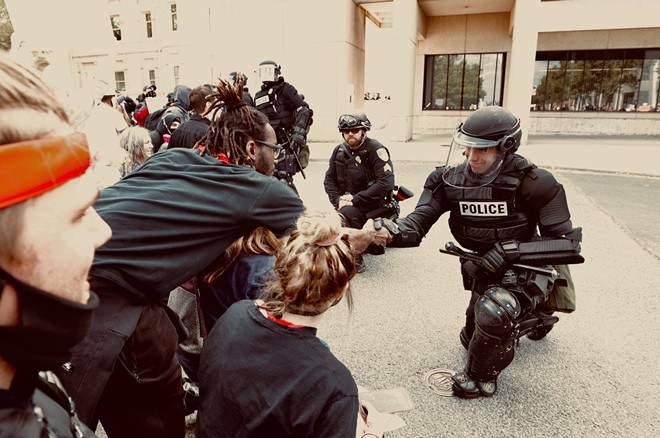 Young Kwak photo
Some local officers kneeled in solidarity with protesters outside the county courthouse.


Earlier scenes from the protest:

Things feel way calmer and quieter up here after the officers kneeled a few minutes ago. Some said “thank you! That’s what we wanted!” #GeorgeFloyd Spokane pic.twitter.com/v3qYfwl3K0

Crowd getting riled a bit more after a protest attendee near us at the front heard the officers talking about reinforcements and shouted that to the crowd pic.twitter.com/K3UNERfDxw

That was short. Crowd busting through the line now pic.twitter.com/uw0FoOujMJ

“Black lives matter” chants as the crowd at the courthouse mostly holds the do not cross line pic.twitter.com/fLSCFeESuQ


This story is developing and we'll continue to post updates.