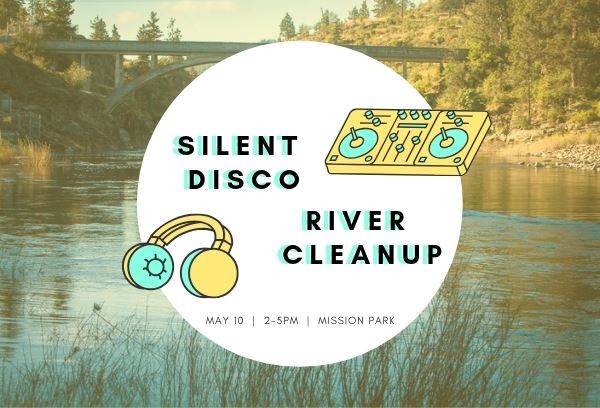 Want to dance it out while making your city a little better?

That's the idea behind the "Silent Disco River Cleanup" scheduled for this Friday afternoon, May 10, which promises to make volunteer river cleanup work groovier than ever.

Also known in some circles as a silent rave, the event is named for the fact that participants will all get to jam out to the same music through wireless headphones that will be passed out, without disrupting the peace and quiet of the park.

During the three-hour cleanup from 2 pm to 5 pm, volunteers can listen to sets by DJ Unifest (Matt Bogue), DJ MOON WILD (the artist formerly known as Lady Llamanade, a.k.a. Stephanie Bogue) and Darrien Mack. Volunteers should be able to switch between channels featuring each DJ's musical stylings, which importantly WON'T ONLY INCLUDE DISCO. There should be an eclectic mix of summery electronic dance music, indie, neo-soul, funk, modern disco and more. The goal is to get people dancing and enjoying their time while they work.

“A clean river? Dancing? What’s not to love?" says Spokane Councilwoman Kate Burke in an announcement sharing her support for the event. "I am happy to participate in unique events like this that benefit our river and promote a strong community.”
Volunteers will also be provided with gloves, garbage pickers and bags for the cleanup which will take place at Mission Park, 1208 E. Mission Ave. in Spokane.

Spokane Riverkeeper and Gonzaga University Office of Sustainability are partnering to put on the event. In addition to dancing and cleanup work, the event will feature an interactive display by Gonzaga's Biology Department on plastics and how they break down and remain in water resources.