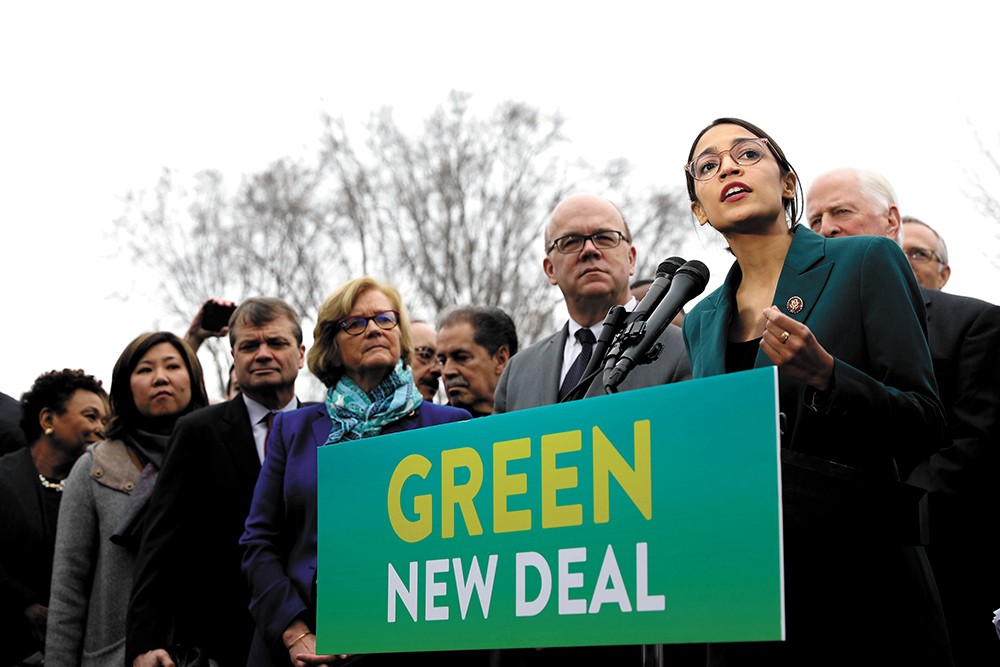 Last October, a group of scientists convened by the United Nations released an alarming report on global warming which described an apocalyptic future of global food shortages, wildfires, increased poverty and droughts — occurring as early as 2040.

The report concluded that global temperatures are "likely" to increase one-and-a-half degrees Celsius between 2030 and 2052 if current emissions trends continue, and that the projected impacts from such a shift will undermine "health, livelihoods, food security, water supply, human security, and economic growth."

It serves as a disturbing reminder about the eventual impacts of climate change if drastic measures aren't quickly taken to reduce global carbon emissions. So when freshman Rep. Alexandria Ocasio-Cortez (D-New York) and Sen. Ed Markey (D-Massachusetts) rolled out a 14-page nonbinding resolution dubbed the "Green New Deal" in early February calling on the federal government to engage in a "10-year national mobilization" to reshape America's infrastructure and industry to make it carbon neutral, the document cited the U.N. report. Notably, the resolution deems climate change to be a "direct threat to the national security of the United States."

The document quickly prompted an intense response in national discourse. Republicans took it up as a tool to bludgeon Democrats with, incorrectly asserting that it would cost $93 trillion and that beef burgers would be "outlawed" under the resolution. (Both characterizations sidestepped the fact that the document is a nonbinding resolution with no fiscal note or specific call to ban burgers.) Meanwhile, Democratic presidential candidates lined up to endorse it in something of a progressive litmus test while Speaker of the House Nancy Pelosi (D-California) wouldn't commit to giving it a floor vote. Eventually, the Senate voted down the resolution on March 26.

So what is the Green New Deal? What would it actually have done?

The short answer is nothing. It was a document that served as an endorsement of a broad vision for an expansive federal effort to tackle climate change. As a nonbinding resolution, the Green New Deal wouldn't have enacted any actual policies or spent any federal dollars. And beef definitely wouldn't have been banned.

Specifically, the resolution declares that it is the "duty of the Federal Government" to achieve net-zero greenhouse gas emissions in the United States, create "millions" of high-wage jobs, invest in sustainable infrastructure and promote equity by stopping the oppression of marginalized communities. (In addition to climate change, the resolution also cites issues like rising income inequality and the gender pay gap in the United States, calling them "related crises.")

These goals would be achieved, per the resolution, by upgrading existing buildings to achieve maximum energy efficiency, removing emissions from the manufacturing industry as is "technologically feasible," investing in sustainable farming practices, and promoting emission-free and affordable public transportation, such as "high-speed rail" — among other proposals.

Harkening back to the early 20th century, the resolution's "Green New Deal" title refers to when President Franklin D. Roosevelt successfully pushed an aggressive series of national programs and laws to jumpstart America's recovery from the Great Depression — the implication being that the U.S. needs a similar level of national government mobilization to address climate change.

Deric Gruen, program director at Front and Centered, a coalition of groups representing communities of color advocating for equitable climate change policy, says that the Green New Deal is more of a "frame" as opposed to a "set of policy beliefs."

"It's a frame that is trying to incorporate the need to address our climate crisis, jobs crisis, and broader environmental equity crisis together in one," he says. "Right now we need vision more than anything else."

"We can work towards a more equitable economy and a cleaner environment at the same time," he adds.

Nick Abraham, a spokesman for Washington Conservation Voters, says it seemed like there was broad confusion over the actual function of the Green New Deal: "There was clearly some disconnect," he says. "It was only talked about like it was an actual bill rather than a statement of principles."

While the Green New Deal may have generated vitriol and consternation at the federal level, environmental activists in Washington say that the intersectional principles of the resolution (i.e., tying issues of income inequality, racial inequity and climate change together) are already a mainstay in local environmental discourse and policy initiatives.

"This is something that we've tried to be out in front on," Abraham says of local environmental groups.

He points both to Initiative 1631, the failed carbon tax initiative that pushed investments in areas like financial assistance for low-income energy consumers impacted by the fee, and a bill requiring that local utility companies purge fossil-fuel-powered electricity from their output by 2045 that recently passed the state House and Senate.

Washington state Senate Majority Leader Andy Billig (D-Spokane), a sponsor of the 100 percent clean power bill, says that there are "parallels with the Green New Deal" and local legislative efforts.

While many local environmentalists agree that the Green New Deal generated needed publicity for the urgent issue of climate change, some activists think that its boldness may have been counterproductive.

Gabrielle Duebendorfer, president of the Sandpoint chapter of Citizens' Climate Lobby, says that the broad scope of the Green New Deal and its tethering of climate change with issues like income inequality, the racial wealth gap and improving the welfare state could alienate moderates and conservatives who might be open to addressing global warming.

"It's kind of a two-edged sword," she says. "It is so large and nonspecific.

"All the Democratic liberal premises are included in there," Duebendorfer adds. "It's really important to have the connection [between] these issues pointed out, but from a political perspective, it's not very savvy."

Others argue that partisanship taints every issue in today's polarized political climate and that environmentalists shouldn't cater their messaging to try and bridge the arguably "unbridgeable" political divide: "We need to be responding to the science and the real facts on the ground rather than any political traps," Gruen says.

For now, the Green New Deal seems to have been put on the backburner. Ocasio-Cortez and like-minded interest groups and lawmakers are reportedly working on specific bills to achieve individual goals outlined in the original resolution, per reporting from the Hill.

But activists say that the energy generated by the Green New Deal — particularly among young progressive activists in the Democratic Party base who are taking an increasingly assertive role — is long lasting.

"I think something has changed," Duebendorfer says. "The politicians know that there is a young force and [new] politicians who are rising that need to be reckoned with."

"I don't think it's faltered, especially because it's going to be such a huge piece in the Democratic [presidential] debates," Abraham says. "The base is so behind it. There's so many Democratic activists for this." ♦

The original print version of this article was headlined "The Green New Deal, Explained"