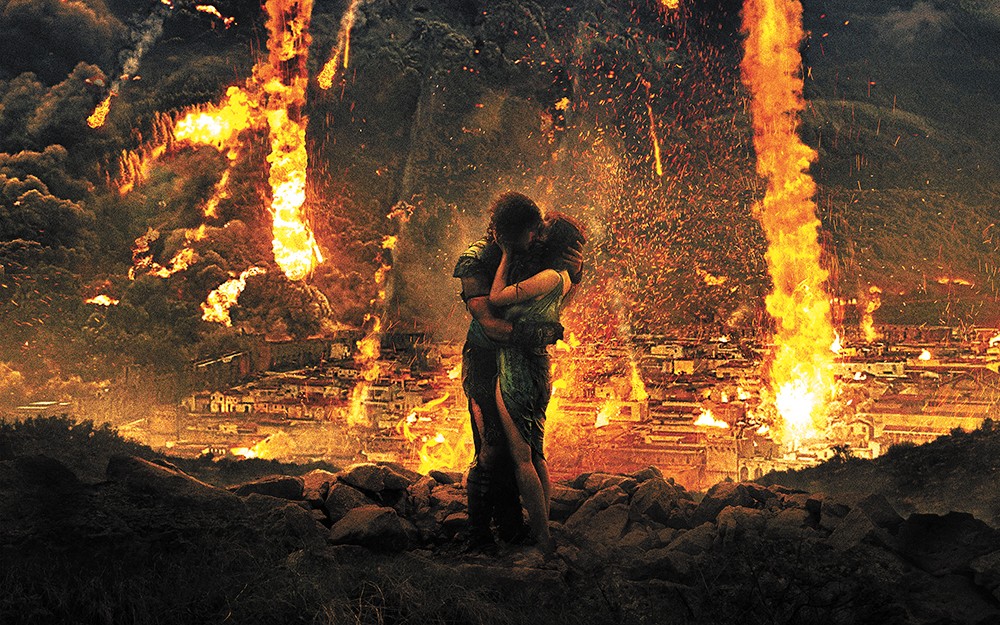 You have to give Paul W.S. Anderson credit for this much: he’s an equal-opportunity ogler. Having spent the entirety of the Resident Evil franchise flaunting his wife Milla Jovovich as if she were a heavily armed bauble, he now invites us to gawk at Game of Thrones’ Kit Harington through a similarly lascivious lens. Playing Milo, an enslaved, leather-clad gladiator (you can already hear the clatter of slash fiction being written), Harington makes his first appearance waltzing into a Roman Empire arena, glistening as if he were a piece of sugar-coated man candy.

Consider it a bone thrown to any women watching and food for thought for members of the flick’s target audience who have perhaps abandoned their New Year’s resolution to hit the gym. It’s also a reminder that Anderson is a purely populist filmmaker, primarily concerned with creating spectacle and more than willing to lapse into ridiculousness if it earns a gasp from the paying customer. Fortunately for those anteing up for Pompeii, a certain infamous volcano eruption circa 79 AD proves wholly conducive to Anderson’s over-the-top 3-D visuals. But be warned: Mount Vesuvius comes to a surprisingly slow boil, an issue perhaps attributed to having too many cooks in the writing room.

As one might expect, a screenplay that features contributions from both Downton Abbey’s Julian Fellowes and Batman Forever’s scribes occasionally struggles with coherence. The film’s early sections hinge on Anderson’s characteristically well-executed mortal combat, with Milo strutting his brutal stuff and bonding with fellow imprisoned warrior Atticus (Adewale Akinnuoye-Agbaje) through a largely indecipherable gladiator code. When not spilling blood, he catches the fancy of Pompeiian noblewoman Cassia (Emily Browning). She’s spurning the lecherous advances of Roman senator Corvus (Kiefer Sutherland), who just happens to be the man who murdered Milo’s family.

Surely swordplay, star-crossed romance and revenge should be adequate to bide the time until Vesuvius blows its top. However, another unwieldy subplot is grafted on, featuring Cassia’s parents (Jared Harris and Carrie-Anne Moss) convincing Corvus to “invest” in Pompeii by using the first-century equivalent of a real estate developer’s models. Ludicrous even by Anderson’s permissive standards, it also draws undue attention to both the director’s indifference to dialogue and the cast’s insistence on playing this patchwork material unnecessarily straight. Only Sutherland boldly takes an affected, amplified approach, occasionally recalling Oliver Reed’s “did it for the drinking money” turns in the likes of Gor.

While Jovovich has developed into a commanding screen presence thanks to her husband’s showcases, Harington is a little more than a serviceable action hero, confirming that well-honed glowering and a chiseled physique don’t directly translate into a formidable bearing. Fortunately for the film he headlines, he’s not expected to be most impressive thing on display here. And just as Pompeii is threatening to become as deathly boring as watching lava harden, Anderson finally has the decency to usher in a natural disaster.

The faint praise that has found its way to Anderson over the years has routinely centered on set pieces that demonstrate a superior understanding of spatial relationships, resulting in some welcome visual coherence. While he’s accustomed to operating in more confined spaces, the director acquits himself well with Pompeii’s larger scale. Rather than completely disregarding the laws of physics as Roland Emmerich does in disaster porn like 2012, Anderson instead depicts a civilization’s ruin as if it were a Rube Goldberg device, cleverly ensuring that every act of devastation triggers another instance of mayhem. For all of his deficiencies as a filmmaker, it must be said that he’s put real thought into his senseless destruction. And that’s become something of a lost low art. ♦

Pompeii is not showing in any theaters in the area.