Helpful? Hazardous? Get in the know about hormone replacement therapy 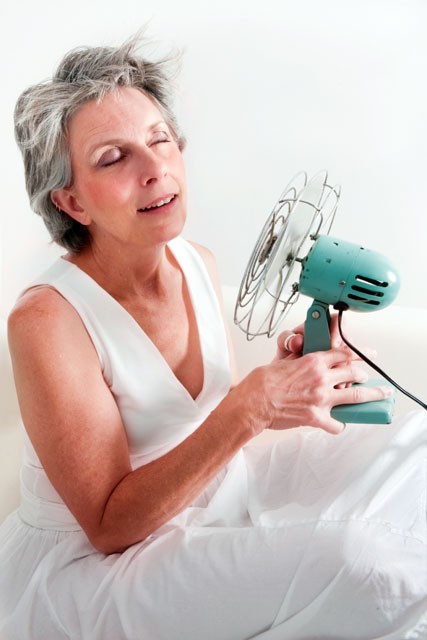 “If you took them away, I would kill you.” That’s what Christie Hoffman said, when I asked her about hormones. The 58-year-old director of community relations at Riverview Retirement Community says hormone replacement therapy has granted her sanity through hellish hot flashes and unbearable insomnia.

“Until you experience it, it’s like having a newborn baby and being up all night,” she says.

When weighing risk against benefit, Hoffman says the decision to remain on HRT — which uses medication containing hormones to replace what is no longer being produced by the body — became a quality-of-life matter.

Before 2002, replacement hormones were the standard combatants for pacifying the symptoms of menopause.

That was until a data resource called the Women’s Health Initiative published a study concluding the risks of estrogen plus progestin (including increased chances of breast cancer, heart attacks, strokes and blood clots in the lungs and legs) outweigh the advantages — namely, fewer hip fractures and colon cancers.

These findings fueled a substantial decrease in the use of HRT in the United States, as reported by the New England Journal of Medicine.

Edie Ward, a pharmacist and director of clinical education at Riverpoint Pharmacy, believes the panic was slightly overblown.
“If you look at the actual numbers, you would see the risk of breast cancer is still relatively low,” she says.

Not to imply those numbers are completely unimportant, but they’re not staggering, either.

“I would never say those numbers are insignificant,” says Ward. “However, those numbers are still very small. HRT is not something that can just be indiscriminately given. It needs to be given responsibly, and done in a way that takes in as many aspects of individual needs as possible.”

Dr. Susan D. Reed, professor of obstetrics and gynecology at the University of Washington, says the data actually suggests the risks for women aged 50-59 are minimal to nil — if the woman is healthy and has a normal lipid profile.

“The WHI gave us very good information regarding what happens when you give those types of hormones to women who are above average age, and may have been well off hormones for up to 10 years, or even longer periods of time,” she says.

What it didn’t tell us, says Reed — and what we need to know — is how concerned we should be for the use of HRT in women who are 46 to 60 years old, since those are the women who tend to be more symptomatic.

There’s also been a time lapse. A new Endocrine Society scientific statement on Postmenopausal Hormone Therapy, published July 2010 in the Journal of Clinical Endocrinology Metabolism, points out the original purpose of the WHI study was to determine “whether HRT truly protected against heart disease, and whether or not it increased breast cancer risk.”

The statement highlights statistical factors, noting “the average age of participants was 63, and only 3.5 percent of the women were 50-54 years old, the age when women usually make a decision regarding initiation of HRT. In addition, the WHI did not address the major indication for HRT use, relief of symptoms.”

Another study recently conducted by Dr. Michael Chen, Rush University Medical Center’s neurointerventional expert, yielded results suggesting oral contraceptives and HRT may actually protect against the formation and rupture of brain aneurysms in women.“If you ask me [about HRT] again in 10 years, the answers will be different, just as if you had asked me 10 years ago, or even five years ago, my answers would have been different,” says Dr. Debra Ravasia, founder of the Women’s Health Connection in Spokane. “That’s how quickly this field changes.”So who risks the most by taking HRT? That’s relative, says Ward.For example: The survival rate for older patients within 12 months of experiencing a hip fracture is very poor.

“Therefore,” she speculates, “HRT may be warranted to prevent osteoporosis.”

Dr. Reed doesn’t recommend HRT for women who are older, have a personal or family risk of breast cancer, have a body mass index greater than 30, have had a stroke, or have experienced pulmonary complications.

Ravasia says she no longer feels comfortable automatically offering standardized doses of “traditional HRT” (i.e., pharmaceutical-strength estradiol and synthetic progestins), to patients, since she herself would not be comfortable taking it. She says it’s important to emphasize focusing on the individual, as everyone produces and metabolizes hormones differently.

The route of treatment, on that note, is far from overarching.

“As such, I strongly favor measuring actual levels of hormones, and replacing only what is low or missing,” says Ravasia. “Not the supraphysiologic levels that are often reached by synthetic pharmaceutical hormones.” She says there’s no such thing as one-size-fits-all.

Bio-identical hormones, substances chemically synthesized to be identical to hormones the body makes naturally, operate on this platform.

“The main benefit from bio-identical hormone therapy, is that it’s created especially to match your needs,” says Ward.
Kind of like a hormone cocktail.

“When you use something that is commercially available, there are a lot of options, so you have the ability to make changes — but you may not be able to fine-tune it, as well,” says Ward. “Custom compounding fine-tunes it to the exact person. So it’s nice for people who have tried many therapies, without benefit or luck.

Do keep in mind: “Bio-identical” doesn’t automatically mean a product is safer.

“Bio-identical hormones can be just as dangerous as synthetic ones when used inappropriately or prescribed in too high of doses.”

Ravasia recommends paying attention to the source, and making sure your pharmacy is accredited by the Pharmacy Compounding Accreditation Board.

In terms of trends, Dr. Reed says there’s a strong movement toward taking the lowest dose possible, particularly through transdermal modes like gels, patches and rings.

“For this reason, I commonly use the Mirena intrauterine device, since it gives minimal concentration of progesterone to the breast, and goes right to the uterus,” she says. “My patients  are all on a low, or ultra-low dose, transdermal estrogen regime.”

Dr. Noel S. Weiss, professor of epidemiology at the University of Washington, reiterates that less is better. He says the current recommendation for a woman taking combined hormone therapy is to do so for as short a period as possible —no more than a couple of years.

“It’s to try and get her though the time that she needs it,” he says.