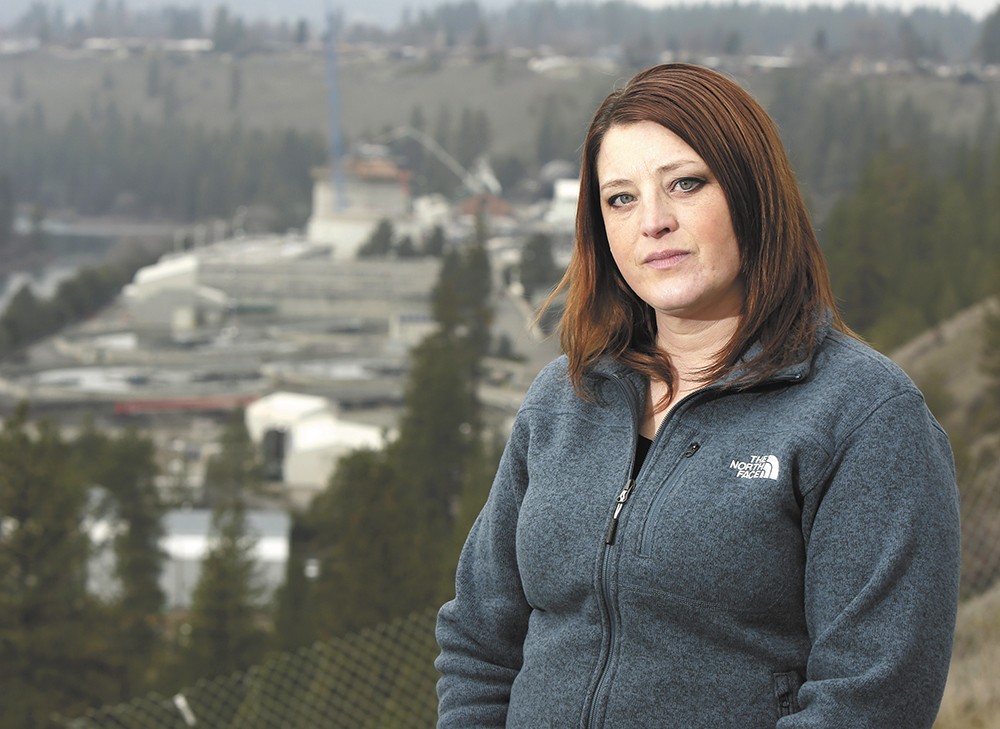 Young Kwak
Sonya O'Brien stands on a bluff overlooking Riverside Park Water Reclamation Facility. She worked as an operator there for five years before being forced out due to what she says was a hostile work environment.

Sonya O'Brien began writing down, in a red, spiral-bound notebook, all the retaliation she says she received after complaining of harassment while working as an operator in the male-dominated subculture at Spokane's wastewater treatment plant: the sexualized environment, the befouled locker rooms and the dread that marked her final days before she quit.

O'Brien says she complained to her union representative and the city's Human Resources Department. But she says the city's response didn't end the harassment, which she says effectively ended her career in water resources.

"I felt like I was fighting against the world," she says. "I still do."

In a city with 2,000 employees, there's bound to be friction between different personalities. Some appeal to HR in hopes of a resolution; some of those are invariably left unsatisfied by the outcome.

O'Brien's case is different. She complained to the U.S. Equal Employment Opportunity Commission, a federal agency responsible for enforcing anti-discrimination laws; it found in 2015 that O'Brien was indeed subjected to a "hostile and intimidating" work environment and that HR's efforts to end the harassment were so "ineffective" that O'Brien was forced to quit.

The EEOC also found that O'Brien was subjected to retaliation by other employees after the city improperly released documents during its investigation. The EEOC further determined that the release had a "chilling effect on other employees' willingness to speak out against or complain about employment discrimination."

O'Brien thought her situation was rare. But in recent months, documents released by the city have shed light on allegations that former police Chief Frank Straub verbally abused subordinates, with one accusing him of sexual harassment. The Spokane City Council and Mayor David Condon have hired an independent investigator to look into the circumstances surrounding Straub's ouster, as well as how well the city handles employee complaints of discrimination and harassment.

"If enough people speak out, maybe something will change in city leadership," O'Brien says. "I don't want to be in the limelight, but I think it's my time for the side of the story to be heard."

A single mom with three kids

, O'Brien earned a degree in water resources from Spokane Community College, and in 2008 took a job at the city's wastewater department, installing and monitoring equipment for the city's combined sewer overflow program.

O'Brien describes herself as a "tough girl" accustomed to working in male-dominated environments. But this, she says, was different. 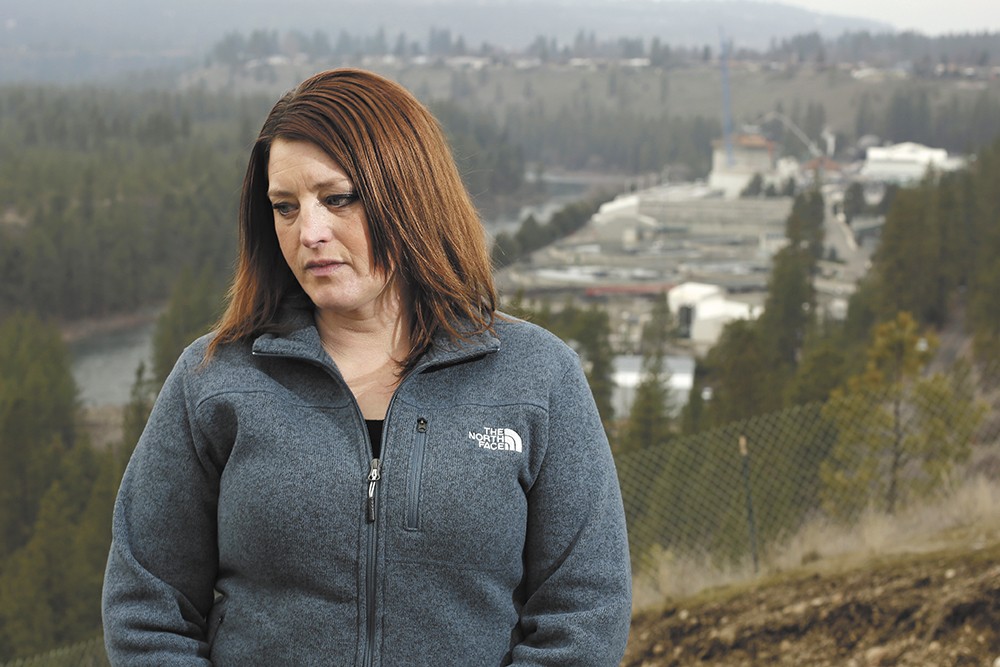 Young Kwak
Sonya O'Brien: "I knew the moment I filed a harassment claim, my life would change."

Of the 30 men she worked with, she says a lot were "good men." But she says there were a lot of "not-good" men, who she says made trouble for her almost immediately. After a day of surveying sewer lines, O'Brien would use the women's locker room (used only by her and a clerk) to shower and change. She says she routinely found the toilet covered in urine and chewing tobacco spit. She says the message was clear: You are not wanted here. But even after complaining to her supervisor and having the three-digit lock rekeyed multiple times, she says the problem kept reoccurring — for five years.

The breaking point, she says, was in December 2012, when she found smeared feces in the women's locker room along with more urine and chaw spit.

"At that point I decided enough was enough," says O'Brien, who filed complaints with HR and her union representative. "This is threatening behavior, and not normal behavior."

Heather Lowe, the city's HR director, doesn't recall all the details of O'Brien's situation, but says the city took her complaint seriously and responded to it.

"I recall hearing about that issue [with the locker room], and as soon as we were made aware of it, we called in the police department," she says. "Unfortunately, when we heard about it everything had been cleaned up, so there was no way for us to see what had happened in there."

Lowe says that HR launched an investigation in January 2013 and found evidence of sexual harassment at the plant that resulted in three managers leaving (she wouldn't say if they were fired). HR held a mandatory sexual harassment training for all employees at the plant, says Lowe, and the keypad lock on the women's locker room was replaced with a swipe-card lock.

But O'Brien says things got worse after the investigation. She says that as part of the training, employees were given handouts. One side, she says, described harassing behaviors. The other side described behaviors that constituted retaliation. O'Brien says she began to find copies of the handout with the side about retaliation face-up on her equipment.

Wanting to prove that she was tough enough, she would just crumple them up. But later, she says, she would find the settings on her equipment altered. She also says that a co-worker started alluding to potential accidents that could happen while she was surveying sewer lines.

"If a person were to fall into one of the basins, you'd never be able to get out," she recalls hearing. Fearing for her safety, O'Brien quit her job in April 2013. Around the same time she filed her complaint with the city, she filed a similar complaint with the EEOC, which opened an investigation.

The determination states that the city retaliated against O'Brien by sending out an unredacted copy of the EEOC subpoena to other employees, violating the investigation's confidentiality.

Lowe disputes the EEOC's conclusion that the city HR's response was inadequate. She says her department strives to treat employees respectfully and fairly. She says she's also troubled that O'Brien waited years before complaining.

"I want them to come to HR the first time something happens," says Lowe.

known for successfully suing the city, says that he's seen situations like O'Brien's, where a woman is harassed in a male-dominated work environment.

"The typical scenario is you get a couple neanderthals that are resentful that their boys' club is being violated," he says.

He says that city HR has an incentive to not thoroughly investigate complaints, because doing so could give an aggrieved employee ammunition in a lawsuit against the city.

"I have so little faith in the HR department," says Dunn. He points to a $230,000 jury verdict he won against the city and Lowe in 2014 that he says proves how "disjointed" the department is. The case involved Liane Carlson, who was hired as an HR analyst in 2007 and was dismissed in 2012 after having a stroke. The following year she sued for discrimination.

Noting her 18-year career in human resources, Lowe dismisses Carlson's criticism as ill-informed. Lowe says Dunn's characterization of her department is inaccurate, saying the city wants to be the "employer of choice" and that means responding adequately to employee concerns.

In November, the city released records showing that former police spokesperson Monique Cotton accused Straub of sexual harassment. The allegations weren't investigated by the city. Condon has said that HR didn't investigate because Cotton was unwilling to cooperate. The local chapter of the National Organization for Women filed an ethics complaint against the mayor for not investigating the allegations.

But in December, Cotton told the Inlander that she was fully expecting an investigation into complaints of a hostile workplace. Carly Cortright, a former police department executive, clashed with Straub over his allegedly abrasive style. She says she didn't bother to file a complaint with HR because she didn't think there would be a response.

The city's HR policies state there "shall" be an investigation of harassment complaints. But it also states that these problems should "ideally" be resolved informally at the lowest level. Lowe says that sometimes a conflict between employees is just a misunderstanding that can be resolved with a face-to-face meeting, negating the need for an investigation.

"The ultimate goal is to resolve the issue, whatever it might be," she says.

After leaving her job

at the wastewater treatment plant, O'Brien says she collected unemployment before taking a job at a similar facility. However, she says her reputation in the relatively small industry followed her to this job, one that she ended up quitting as well.

She says she's currently in negotiations with the EEOC and the city to resolve the issue before it becomes a lawsuit. In the meantime, she says she's barely making ends meet and her career has been wrecked.