They're all heating up! 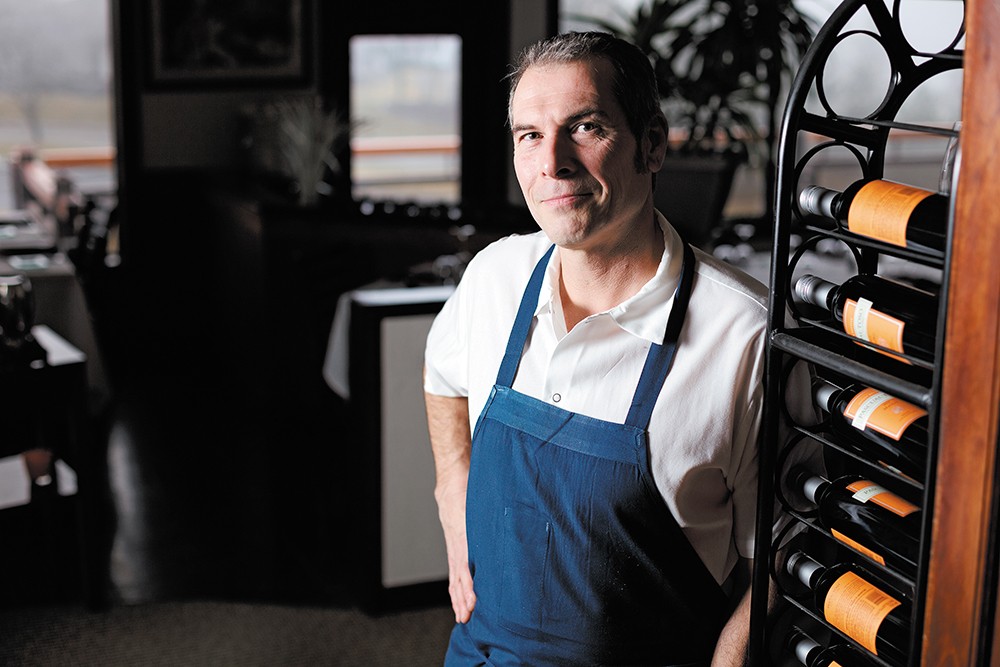 who are challenging and changing the region's perspective on food, all while delighting diners' palates and receiving major accolades. Three of these four local chefs were named semifinalists for the prestigious James Beard Foundation's Best Chef award, and one has been a contestant on the hit series Top Chef.

For almost a decade, this French-born chef — he enrolled in a hospitality school in the Alps at age 15, and has been immersed in the restaurant world since — has delighted diners with his homemade dishes inspired by traditional French and Italian (a nod to his grandmother) cuisines at his Post Falls restaurant, FLEUR DE SEL (4365 E. Inverness Dr.). In 2017, Zirotti was the sole Inland Northwest-based chef named to a list of 20 semifinalists for the James Beard Foundation's "Best Chef: Northwest" award.

In a past interview with the Inlander, Zirotti described the food at Fleur de Sel: "Are we a French restaurant? Yes. Not only because of the accent, but my wife [Patricia] is also working in the dining room. So you get real French people working," he said.

"But are we a traditional French restaurant? No. I think we are a mix of serving traditional dishes and dishes also that are French with a twist... It's fun for me to do things that are not always traditional and also to adapt with our clientele."

Diners can also find the Zirottis' careful attention to ingredients and French techniques at their Spokane offshoot, FLEUR DE SEL ARTISAN CREPERIE (909 S. Grand Blvd.), which opened in 2015. There, you'll find a variety of classically French-style crepes, both savory — try the bison meatloaf — and sweet, like rhubarb, Nutella, lemon curd and more.

Since shortly before leaving his post as executive chef of the Coeur d'Alene Casino in 2014, this local food prodigy has gradually built up a regional food empire under the umbrella of his company, the Eat Good Group. With numerous culinary accolades to his name, including his selection as a 2016 James Beard semifinalist, Hegsted currently owns a handful of restaurants, along with his LE CATERING CO. In June 2017, Hegsted also launched the inaugural Crave! NW food festival.

Always striving to be at the forefront of the region's expanding culinary culture, Hegsted believes — thanks to the local chef- and producer-driven movement we're in the midst of — that Spokane and the rest of the Inland Northwest is finally starting to form its own food identity.

Sample some of this Inland ingenuity at Hegsted's varied dining venues, including the homestyle daytime joint THE YARDS BRUNCHEON (1248 W. Summit Pkwy.), where you'll find hearty diner-inspired dishes including chicken and waffles, poutine and burgers. Next door, the chef's WANDERING TABLE (1242 W. Summit Pkwy.) offers a Northwest-centric tasting menu of diverse, seasonal dishes, served at varying price points and portion sizes, meant to be shared and sampled in number.

The locally raised chef's empire spans from here out to Liberty Lake, where his EAT GOOD CAFÉ; (24001 E. Mission Ave.) serves up a healthy, cafeteria-style list of items for breakfast and lunch to the bulk of employees at the Meadowwood Technology Campus in which it's located. The menu changes weekly based on what's available, but is always posted online, where orders for pick-up can also be placed.

Across the state line, Hegsted's latest project is the newly opened FARMHOUSE KITCHEN & SILO BAR (477227 Hwy. 95) in Ponderay, Idaho, a little town on the banks of Lake Pend Oreille. With a focus on brunch and dinner, Farmhouse offers many items and themes that'll be familiar to diners who know the chef's Spokane eateries. Consider the dish "breakfast for dinner," which is noted between listings for steak-chorizo fajitas and blackened Alaskan cod tostadas.

Head south from there and you sample seasonally sourced pub grub — think burgers, fish and chips, barbecue, sandwiches and a focus on regional craft beer and wine — at the newly opened REPUBLIC KITCHEN + TAPHOUSE (120 E. Fourth Ave.) in Post Falls. Hegsted is Republic's executive chef and a partner in ownership, along with the Latham family of Post Falls. The restaurant is located in the historic Young House, built in 1910 and the only home in the city listed on the National Register of Historic Places.

Many consider this award-winning chef to be the pioneer who led the Inland Northwest's modern culinary renaissance that began about a decade ago. It was around that time that 2015 James Beard Award Best Chef semifinalist Hansen — who's traveled twice to the esteemed culinary foundation's New York City headquarters to showcase his skills on site — opened SANTÉ RESTAURANT & CHARCUTERIE (404 W. Main), which has established itself as one of downtown Spokane's most authentic fine dining experiences.

Adjacent to Santé's white-linen tables, where diners enjoy seasonal menus showcasing fresh ingredients in European- and French-inspired dishes, is Hansen's craft cocktail lounge, BUTCHER BAR. Pair a classic cocktail, many of which include housemade infusions, tinctures and jams, with a charcuterie board showcasing Hansen's precise adherence to the no-waste practice of whole-animal butchering.

Both of these establishments inside the historic Liberty Building also serve bread and pastries made at Hansen and his wife Kate's COMMON CRUMB ARTISAN BAKERY (19 W. Main), located inside the Saranac Commons. While you can find Common Crumb's loaves, pastries and sweet treats at several area grocers and farmers markets, make a point to visit the source, where you'll find a case filled with items including croissant sandwiches, French pastries and confections, all prepared under the careful eye of head pastry chef Lynette Pflueger.

Having established himself as a major player in the region's culinary community, Hansen's most progressive project debuted in early 2017, with the opening of INLAND PACIFIC KITCHEN (304 W. Pacific) in the newly renovated Washington Cracker Co. Building. The eatery's focus is on rotating tasting menus, each exemplifying a theme, like medicinal spices, (the summer 2017 menu), vegan ingredients, or traditional Japanese methods. IPK, as it's known for short, also regularly hosts guest chef collaboration dinners and other special dining events.

Just below the restaurant is the intimately rustic HOGWASH WHISKEY DEN, a whiskey-forward lounge that serves its whiskey craft cocktails alongside a pub-style menu, with a few burgers and simple snacks, like salted honey toast, skillet corn bread, pork belly and sauteed veggies.

With five restaurants, plus a catering company (located below Inland Pacific Kitchen), Hansen's local food empire continues to expand in the latter half of 2017, with the debut of BISCUIT WIZARD in a recently vacated spot inside the front of the Saranac Commons. As of this writing, the café-style eatery is set to serve a variety of biscuit sandwiches and breakfast items.

In mid-2017 it was also announced that Hansen is partnering to bring two restaurants — OCTOPUS GIN and the BRASSERIE RIDPATH — to the first floor of the forthcoming Ridpath Club Apartments; the former is planned to open sometime later in the year.

Local diners rejoiced when word began to spread in fall 2015 that celebrity chef Chad White, a contestant on the 13th season of Top Chef, was coming back to his hometown after 15 years away to open a restaurant. The result is ZONA BLANCA (154 S. Madison), the region's first ceviche joint, where White crafts colorful and flavorful Baja-inspired dishes.

Though his initial plan upon his return was to open a Northwest-centric restaurant, White noticed a lack of Latin American flavors, which had been easy to find in his previous home of San Diego, and throughout his travels in Mexico.

At Zona Blanca, diners can find traditional and new recipes for ceviche, the Latin dish that's centered around raw fish and seafood marinated in lime or lime juice, salt and spices. While many of White's ceviche dishes — served on a tostada or in a bowl — feature flavors inspired by his Mexican wanderings, he also blends in other culinary influences, like Chinese and Mediterranean.

"I think what we do really well is, for people who are coming in who have never had ceviche, or even heard of it, we do a really good job explaining what ceviche is," White told the Inlander. "Even to the point where we're giving a historical background of why these ingredients even exist" in different versions of ceviche.