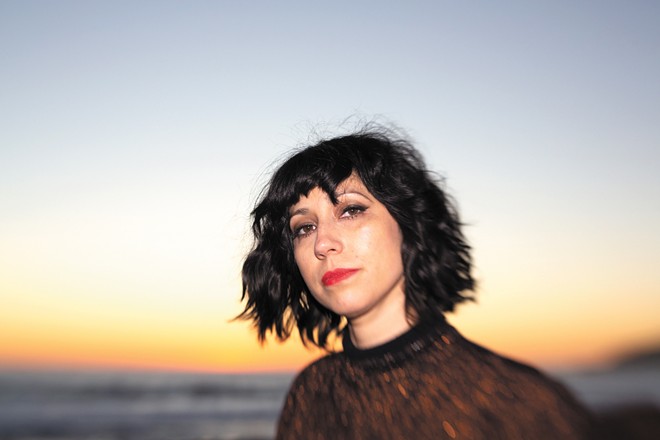 Surreal. It's really the only word that accurately describes the past year and a half for Deep Sea Diver, the Seattle rock quartet led by singer/guitar ace Jessica Dobson and her husband, drummer Peter Mansen. Sure, we've all gone through the nightmarish trying times of the COVID era, but true surreality is marked by both the fantastical and unbelievable lows and highs of dream states. And Deep Sea Diver has experienced both in spades.

When the band was tapped to do an at-home version of NPR's wildly popular Tiny Desk YouTube concert series, they naturally decided to set it in the surreal place they hold closest to their heart — the Red Room from David Lynch's Twin Peaks. So with a little elbow grease — and about $180 worth of duct tape applied to the floor — they transformed their basement practice space into that iconic TV setting to differentiate from the other at-home Tiny Desks, stand out from the thumbnail algorithm monotony, and just feel like they were escaping the place they'd been stuck for the past year.

"I'm sick of this place," Dobson says. "And the Red Room is a place where anything can happen. It's mystical, and it draws you away from reality. The whole year has been wanting to escape."

In a lot of ways, 2020 was Deep Sea Diver's biggest year to date. It saw the release of the group's third LP, Impossible Weight, which received an outpouring of critical and fan approval. The instant standout aspect of Deep Sea Diver has always been the band's stellar musicianship, and the album is a 10-song tour de force of thrilling guitar solos, perfectly placed drum fills, and a melodic sensibility that works equally well on songs that are dreamily atmospheric and anthemic tracks propelled by chunky riffs. All the while, Dobson lyrically explores feelings of insecurity and mental burdens with a resonant personal candor. The album is a winner, but how does one go about hyping up an album in a time of no touring or even leaving the house much? That's literally unprecedented waters.

"One of the strengths in our band has always been the ability to pivot pretty quickly and trying to look at a pretty dire situation with a positive spin," Dobson says. "It's just like, 'OK, what does it look like to release an album in the middle of a pandemic? What does it look like to do that well?' And there aren't many examples. So it was kind of more like an exciting adventure. 'Cause I could focus on the negative and just be sad about it, but that really wouldn't do much for us."

The adaptation included things like turning the early-pandemic trend of livestream concerts into an Instagram variety show complete with fake sets of chain restaurants, comedy bits and, of course, the new tunes.

Not being able to properly tour behind an album is actually nothing new for the band. Deep Sea Diver couldn't tour behind its debut album, History Speaks, because Dobson was in The Shins at the time (she's also been the touring guitarist for Beck, among others). Right when the band's second album, Secrets, was about to be released, DSD was dropped by its booking agent, leading to scrambling together a run of self-booked shows. So Dobson and Mansen were well prepared for a "can't tour" gut-punch. "It just felt like another Deep Sea Diver release," jokes Mansen.

Impossible Weight's most notable accolade came when it was picked by listeners of Seattle indie tastemaker radio station KEXP as the No. 1 Album of 2020, placing it in the class of artists who were past No. 1 picks such as David Bowie, Arcade Fire, Courtney Barnett and Lizzo. As the countdown was announced on the radio, it seemed too... surreal... to be true.

"It's very strange for me to be amongst the list of people who I really respect and put out phenomenal records like Fiona Apple and Phoebe Bridgers," Dobson says. "I didn't think it would be up there with that caliber. We've always floated slightly under the radar, and I've been really grateful that we've grown beyond just being considered a Seattle band. I think a lot of Northwest bands can kind of get landlocked up here, and it's hard to grow beyond that."

One key to Dobson and Mansen's sustained sanity throughout the pandemic comes from their aforementioned basement. Tucked away in a relatively sleepy part of north Seattle, the couple's home boasts the nearly ideal practice space set up with home recording capabilities. In a city where practice space is tight and usually not ideal, having a home setup was a lifesaver during lockdown.

"We are very grateful of the resources we have in our own home. Being on lockdown and having the ability to record things on the fly, to rehearse, play, write — it was all here," Dobson says. "I don't know what the hell I would've done without that stuff."

"It gave us some sort of sanity to have projects amidst the sort of fear, especially early on in the pandemic when we didn't know what the nature of it was," Mansen adds. "It gave us purpose."

Now finally heading back on the road (including dates opening for Death Cab for Cutie), Deep Sea Diver feels most refreshed and anxious. Dobsen's The Shins bandmates keyboardist/singer/percussionist Patti King and bassist/multi-instrumentalist Yuuki Matthews are joining the core band — which also includes Elliot Jackson (guitar and synthesizer) — for this run of shows to expand the DSD sound with a five-piece arrangement. But the core of Deep Sea Diver will always be Dobson and Mansen's married musical life, which isn't always easy, but the results are worth it in the end.

"It's funny because it's easier to [openly collaborate] with other people outside of a normal relationship, but it's a lot harder to do it with someone you're with every day," Dobson says. "Because the comfortability level — sometimes you can drop your professional cloak and turn into the relational, turmoil-based environment. It takes a lot of work for us to do the thing that we love, but it's worth it." ♦