Progress Edition 2019: How far have we come?

WSU Reflects on the "Crimson Cube"

The exterior of the new Jordan Schnitzer Museum of Art on WSU's Pullman campus is dramatic, offering crimson-soaked reflections of the sky, the surrounding campus community and every face that walks by. It was designed, according to architect Jim Olson, to give students "the opportunity to see themselves in the building." Inside, of course, is an even more striking change from the old WSU art museum. The new $15 million museum — $5 million from Jordan Schnitzer — gives curators seven galleries to work with instead of just one, with nearly 15,000 square feet in gallery space total. Inside those galleries, visitors will encounter artwork from around the world, and from their own Inland Northwest art community. "You come to a museum like this and you see some different things you've never thought of, and it challenges you in different ways," says WSU President Kirk Schulz. (DAN NAILEN)

The real-life story of 10 friends from Gonzaga Prep who never quite grew up and still play an elaborate game of tag every February landed on the front page of the Wall Street Journal and then at Warner Brothers.

"I travel a lot for work," says Tag Brother Mike Konesky, "and I've seen people watching TAG on airplanes. I'll tap them on the shoulder and ask what they think. People just love the story, the message of friendship."

... and the real Tag Brothers.

Prior to the premiere, the Tag Brothers made the national media rounds, giving Spokane even more juice in the process — Lester Holt, James Corden, Megyn Kelly.

"Through all the interviews and media, hopefully we represented Spokane well," says Konesky.

And now that the dust has settled, Hollywood's happy with Spokane and its quirky pastimes, too. The film took in nearly $90 million worldwide, against its $28 million budget. So perhaps TAG 2: The Retagging is not so far-fetched after all? (TED S. McGREGOR JR.)

Authors and Arts Rake in Accolades

Spokane novelist Stephanie Oakes received a Washington Book Award for her young adult saga The Arsonist, the story of two contemporary teenagers trying to solve a historical murder. It's not the first time one of Oakes' books has garnered attention: Her 2015 novel The Sacred Lies of Minnow Bly was adapted into a series which premiered in mid-2018 on the video on-demand service Facebook Watch.

Lilac City Live, the monthly talk show filmed at the downtown library, was named one of the year's top innovators by the Urban Libraries Council. The brainchild of the library's community engagement manager and host Ryan Dean Tucker, the show has attracted audiences since late 2017 and has featured local politicians, artists, musicians and business owners as guests. And speaking of libraries, Spokane voters overwhelmingly passed the public library bond, which will fund a number of renovation and expansion projects in most of the city's library branches.

The annual literary festival Get Lit! ended its second decade in 2018, continuing a legacy that has brought a number of acclaimed writers — everyone from Kurt Vonnegut to Salman Rushdie and Jane Smiley — to the Inland Northwest. The upcoming festival kicks off April 22, and will be headlined by writer Roxane Gay, whose work encompasses fiction, critical analysis and even Black Panther comics. (NATHAN WEINBENDER)

Yes, a majority of the 2018 incoming University of Washington School of Medicine students preferred to study in Spokane — where UW partners with Gonzaga to deliver medical education — over Seattle. Between UW's program and the WSU Elson S. Floyd School of Medicine, there are more first- and second-year med school students here than in Seattle. (WILSON CRISCIONE) 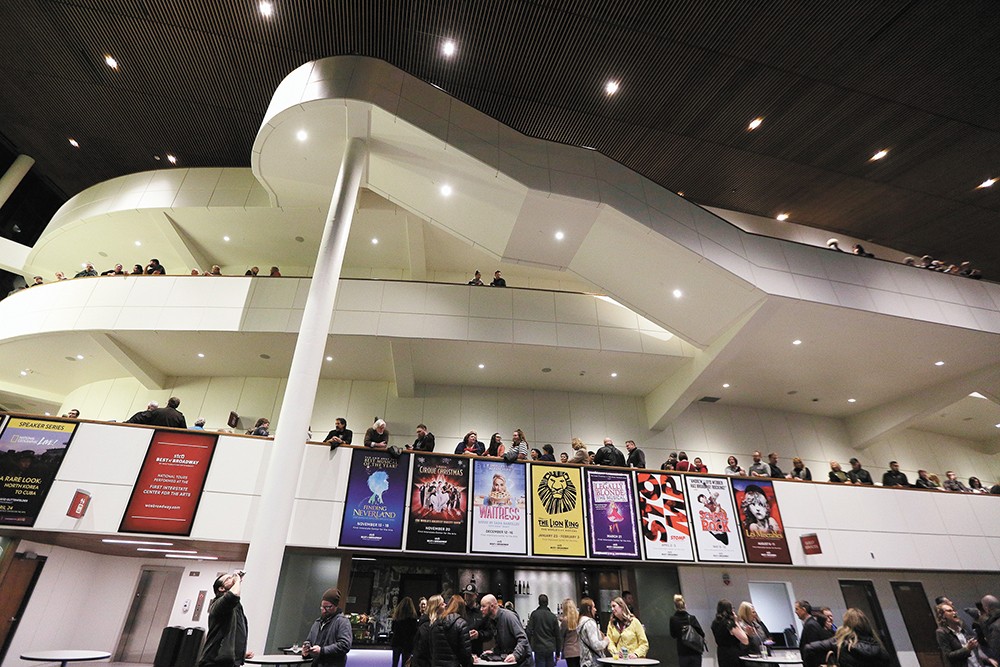 Young Kwak
A facelift and a whole new name.

Welcome to the FIC

Technically, the First Interstate Center for the Arts isn't a new addition to Spokane, but the building formerly known as the INB and the Spokane Opera House sure feels fresh. That'll happen after a six-month, $23 million renovation that was completed just in time for the launch of this fall's Best of Broadway season. While many of the improvements are behind the scenes — replacing the entire electrical system, adding a backstage elevator — some make the visitor experience decidedly better than the old days. Among those are larger seats in the auditorium, a new sound system and the addition of a dramatic art piece, Opening Act by artists Bill and Karma Simmons, that hangs from the lobby ceiling. (DAN NAILEN) 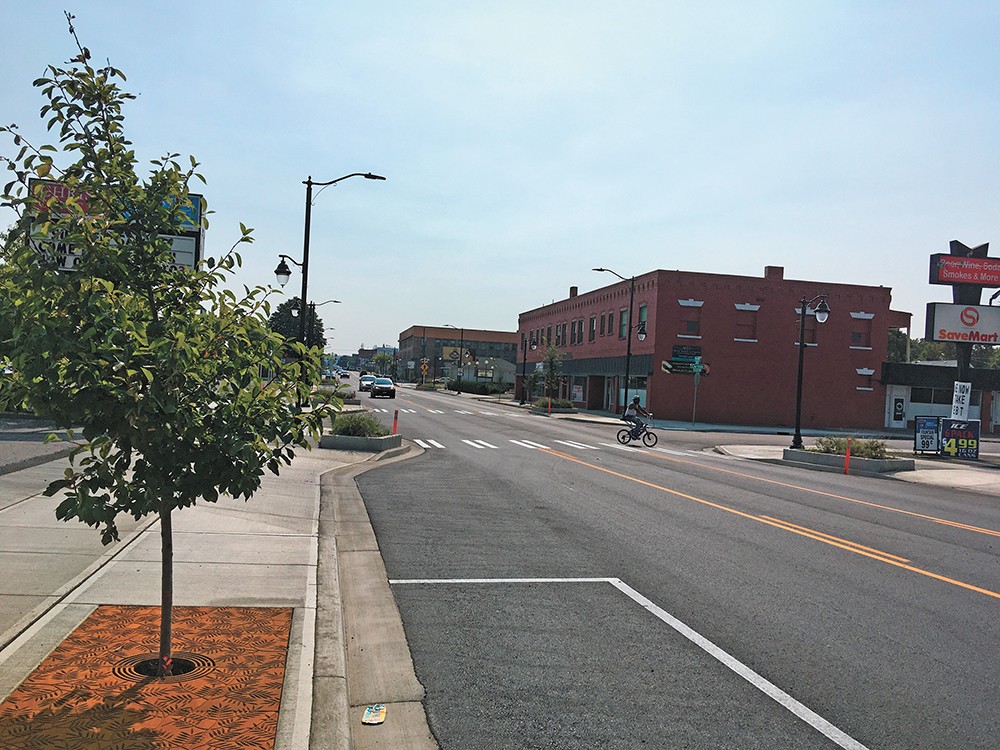 Monroe Goes on a Diet

Few traffic-planning decisions have been as controversial as the city's plan to reduce the number of lanes on North Monroe Street between Kiernan and Indiana avenues. For three years, fights over Monroe Street have left the business district — and the city — bitter, with some business owners hoping the change would usher in a new era of flourishing pedestrian-friendly businesses and others predicting it would jam traffic and bankrupt local stores.

That's not to say everyone loves it: Plenty of people complain about the frustrations drivers have over merging, being caught behind buses or trying to finding a gap to cross Monroe during rush hour. Still, the businesses appear to have survived — while the anger that once defined the issue has all but disappeared. (DANIEL WALTERS) 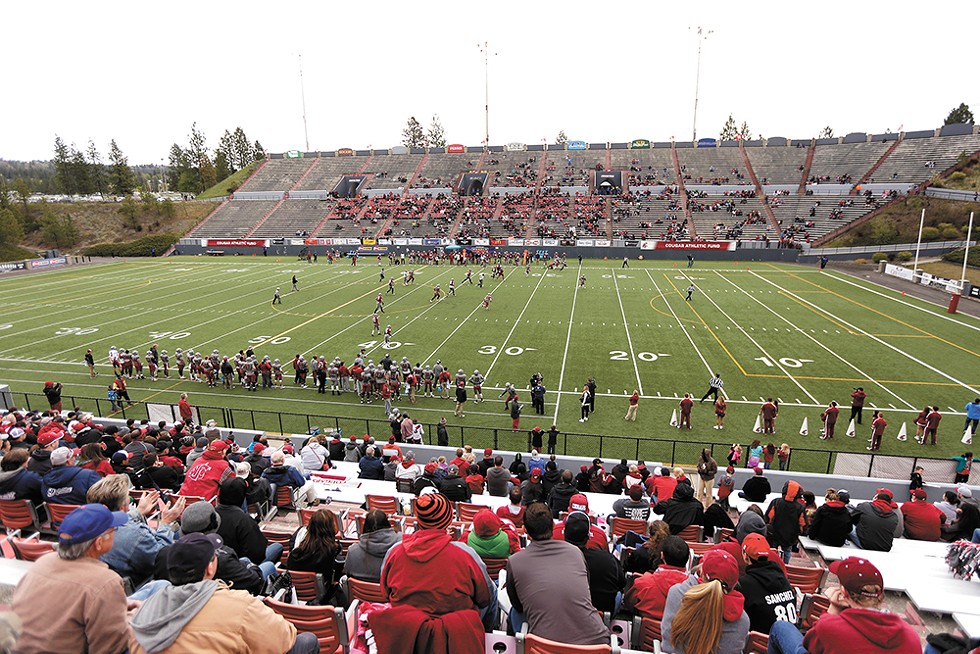 Spokane Public Schools was in desperate need of more classroom space, especially as the district looks to expand middle schools to include the sixth grade. And in November, voters agreed to give it to them.

Roughly two-thirds of voters approved a $495 million bond for three new middle schools and other facility improvements. It was a result of an unprecedented partnership between the district and the city of Spokane, which agreed to let the district use city-owned space for the new schools.

As part of the bond, the district will also receive $31 million to demolish Joe Albi stadium and rebuild it at its current site, though voters rejected the idea to put the new stadium downtown instead. (WILSON CRISCIONE)

For months, there was speculation about what the massive West Plains building code named Project Rose would be. By summer, the best guess was confirmed: e-commerce giant Amazon would be bringing a new fulfillment center and about 1,500 jobs to the Spokane area. Refuting national criticism of its warehouse working conditions and pay, Amazon has said that the yet unannounced wages at the facility will be competitive for the area and that employees will get generous health benefits and leave. With four stories and a roughly 600,000-square-foot footprint, the building at 10010 W. Geiger Blvd. had already seen significant progress in its construction by the end of 2018, with plans to staff it up by fall 2019. (SAMANTHA WOHLFEIL)

Emily Strizich photo
Idaho's not so conservative when it comes to health care.

Idaho, of All Places, Votes to Expand Medicaid

The citizens of Idaho have always hated Obamacare. But, as we learned this year, it didn't hate one of the biggest parts of Obamacare: the Medicaid expansion. Over 60 percent of Idaho voters supported expanding Medicaid this year.

"We expected it to do well, because we knew there was a groundswell of support for Medicaid expansion in Idaho," says initiative organizer Luke Mayville. "But it was a big surprise how spread-out the victory was geographically."

Not only did Medicaid expansion win in the five most populous Idaho counties, like Mayville expected, it actually won in the five least populous counties, showing that some issues transcend the urban-rural divide. (DANIEL WALTERS) 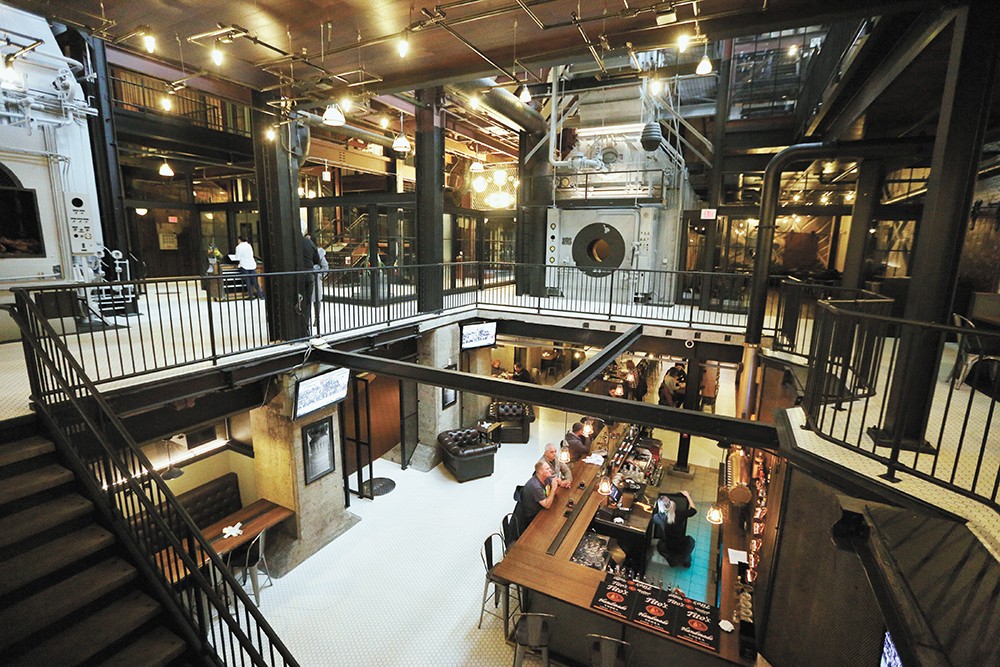 Young Kwak
The Steam Plant reopened after a $4 million remodel.

The Region's Restaurant and Craft Beverage Industry Continues to Boom

The Inland Northwest continues to carve out a name for itself as a drinking and dining destination in the greater Pacific Northwest. Throughout 2018, Spokane and the surrounding area was recognized on several big "best" lists by national publications, touting what most locals already know — that we have great craft beer, coffee and chef-owned restaurants contributing to a regional "foodie scene."

With so much going on, from Food Network appearances to restaurant openings, it can be hard to keep track of it all. So here's an overview of some notable milestones from the past year.

Spring's renewal brought the debut of family-owned American fusion spot Elliotts, an Urban Kitchen in the North Monroe Business District. In Kendall Yards, the chef-owned fine dining spot Park Lodge debuted in May, and has since delighted neighborhood residents and foodies alike. Meanwhile, owners of The Logan Tavern, a casual pub near Gonzaga University, revived a favorite corner hangout with all new food, drink and vibe. After plenty of anticipation, the new bakery and brewery co-op the Grain Shed also launched mid-year in South Perry.

In Coeur d'Alene, chef and restaurateur Adam Hegsted unveiled his latest project, Honey Eatery & Social Club, in a storied downtown space. The first of many planned locations of Hegsted's fast-casual burger spot, Incrediburger & Eggs, also opened at the start of 2018.

In the world of coffee, the region saw a spate of new cafes, including spring debuts of White Pine Coffee Shoppe in Midtown Coeur d'Alene and Arctos Coffee & Roasting Co. in Spokane's Logan Neighborhood. Indaba Coffee Roasters expanded its reach with new locations, including the Riverside store featuring a menu of artisan toast. Also serving toast topped with tasty spreads on Riverside, yet on its west end, is the new Ladder Coffee & Toast. Roast House Coffee also opened its downtown tasting room and cafe, First Avenue Coffee, in mid summer.

In the spirits sector, Dry Fly Distilling announced a massive expansion and new distillery facility north of downtown to allow its products to be exported to countries along the Pacific Rim, starting with South Korea. Craft beer connoisseurs celebrated the arrivals of Humble Abode Brewing in North Spokane, along with Mountain Lakes Brewing downtown and Sandpoint's Utara Brewing and Matchwood Brewing.

Several local chefs spent time in the national spotlight throughout 2018. Featured on a new episode of Guy Fieri's Diners, Drive-ins and Dives was chef Tony Brown's Ruins restaurant. Fleur de Sel owner Laurent Zirotti also appeared on Fieri's Guy's Grocery Games. Late in the year, Spokane pastry chef Ricky Webster was twice seen on Food Network for its Christmas Cookie Challenge, for which he took home a championship title and $10,000, and on the Holiday Gingerbread Showdown.

We've got it on good authority that 2019 is aiming to be just as packed with progress, too. (CHEY SCOTT) ♦

The original print version of this article was headlined "Progress Edition"