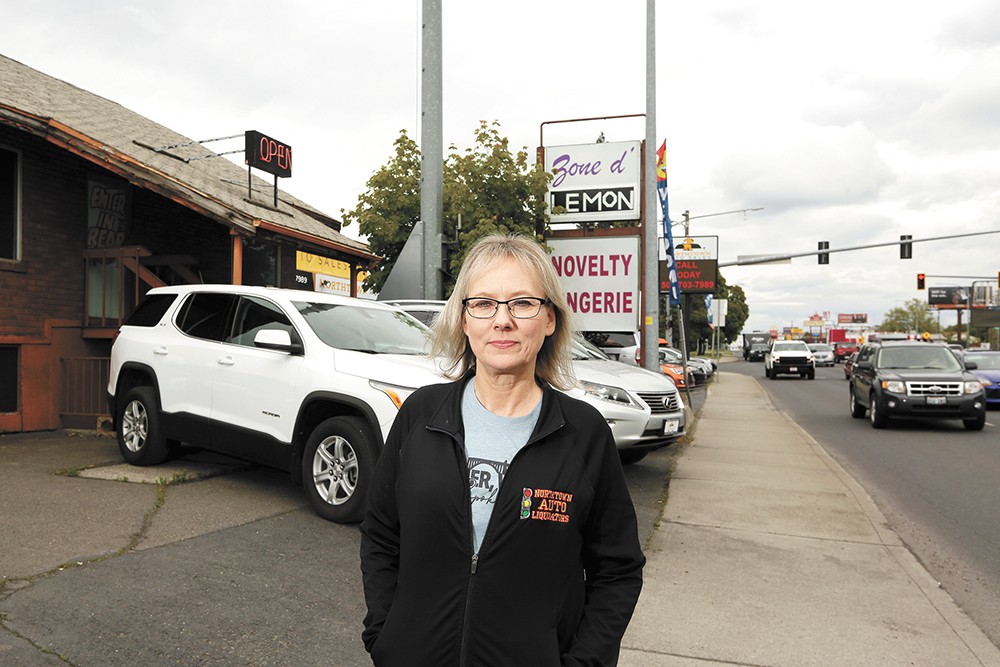 Young Kwak photo
Kim Arrotta, co-owner of Northtown Auto Sales, is frustrated that a next-door business, a sex shop, has remained open throughout the shutdown.

Andre Miesch has long been aggravated by the Cottages at Havana housing development next door to him in south Spokane. The construction, he alleges, has been plagued by garbage, splattered concrete and loud drilling into the evening.

And so when Gov. Jay Inslee issued his stay-home order, Miesch breathed a momentary sigh of relief: Sure, his painting company, Smart Finishes, had to halt its work, but at least construction on the South Hill development would stop as well.

Except it didn't. For weeks, he says, construction on the Cottages continued unabated, even as Miesch watched painting jobs get poached by competitors willing to quietly defy the governor's orders.

"We lost projects during the shutdown to people who were willing to do the work," he says. "Sometimes you get screwed for doing what's right."

On April 2, Miesch filed a complaint with the state against Paint Pros USA, saying it was violating Inslee's stay-home order by continuing work on the Cottages.

"This Idaho-based company is performing nonessential work at this location!" he wrote. "My painting company is shut down and complying 100 percent."

Paint Pros USA co-owner Will Berrier counters that the Cottages' developer had cleared their work with the state. He says they were allowed to continue painting in order to protect the project from falling into disrepair.

"People are at home with the stay-at-home order and looking to point the finger," says Berrier. "There's a lot of smoke in the air right now. People are confused, and a lot of people are scared."

As of last week, the state had received more than 28,000 reports about potential violations of the stay-home order. Some come from concerned citizens or employees who say their bosses have illegally put them in danger. But many come from fellow business owners.

In Spokane and across the state, Inslee's stay-home order has given fuel to existing feuds and rivalries between competitors. Businesses selling furniture, blinds and Creamsicles, those washing cars, building decks, painting buildings and trimming hedges have all complained that they're doing the right thing by shutting down, only to watch the competition get ahead by staying open.

"I was told by the state that residential house cleaning is nonessential," the owner of a local cleaning business wrote. "Now I'm doing the right thing and competitors are stealing our clients. Not playing fair."

Staffers at the governor's office say they can sympathize.

"I imagine it is incredibly frustrating to be compliant, and do what's necessary to help members of the community, and then to see down the street that your competitor is not," says Sonja Hallum, the state's policy advisor in charge of compliance.

But the sheer quantity of complaints, along with unclear regulations and cautious enforcers, means that few of those competitors are likely to pay a price.

THE FOG OF SHUTDOWN

There's plenty of precedent for businesses reporting their competitors for allegedly violating the law. The Washington State Liquor and Cannabis Board, for example, says that complaints about illegal levels of pesticide on marijuana plants often come from rival growers. But in this environment, where many local businesses are taking radical measures to survive, the tension is particularly heated.

"My competitor continued to stay open," Paul Davis, with Davis Office Furniture, says about Continuum Office Environments. "He even has ads on TV right now. He's got flags out, he's got his 'Open' sign on."

But Israel Guerrero, owner of Continuum, says that there's a good reason why they've stayed open: He's supplying essential businesses like Kaiser Aluminum and Providence Health. He shares a photograph of a March 24 letter saying that Kaiser needed to continue receiving supplies to "support the critical infrastructure sectors" exempted from stay-home orders across the country.

Even with that, he says, that his business is struggling.

"I'm down 85 percent. I'm trying to survive without having to close the doors," Guerrero says. "If things don't turn around quickly, we're going to have to close."

Anybody unsure if they're considered essential can get a definitive answer by filling out a form on the state's website. But at times, the answers have fomented more conflict.

"I specifically asked you if this was essential and you told me 'NO,' I could not take my two ice cream trucks out," reads a mid-April complaint by a local ice cream truck operator about Steve West Ice Cream. "You need to either tell him to stop or tell me that I can do this."

But Steve West tells the Inlander that, until last week, he firmly believed he was allowed to drive around and sell ice cream. After all, what is an ice-cream truck but a mobile food delivery business? He was stopped by police officers twice, he says, but both times they gave him the OK to continue. Most people celebrate his presence, he says.

"Ninety-nine percent are thanking us for being out there for our kids," West says.

Last week, West's competitor got his wish, in a way: Inslee's office announced that when they're operating as mobile food vendors instead of stationary food trucks, ice cream trucks weren't allowed to officially operate until stage 2 of the reopening — though on Tuesday Inslee announced that Spokane County was eligible to apply to move to stage 2 early.

In other cases, COVID-related disputes are just the latest front in yearslong battles. Kim Arrotta, owner of Northtown Auto Liquidators on North Division, has complained about a sex shop ever since she moved her business next door in 2010. Last year, she sent photos to the city to show that Zone d'Erotica was breaking the city's zoning codes.

The resulting code enforcement inspection last year revealed that "the volume of adult items" put the business in violation. At the request of the city, the sex shop recently changed the sign outside to "Zone d'Lemon" and began stocking more nonadult products, like clothing and gag gifts.

But when the stay-home order was issued, Arrotta says she complied by largely shutting down her auto business for the first few weeks, only to watch Zone d'Erotica stay open the whole time.

She, along with several others, reported it to the state. Not only has the shop stayed open — actually making more money than usual — it has pointed to its adult inventory as justification. Vibrators, condoms and penis pumps, the store's argument goes, all count as essential medical products.

Alejandro Sanchez, special assistant to Inslee, says that, in general, it's unlikely that the state would consider sex shops inherently essential businesses. But he also says he could, theoretically, see a case where a "family planning store" focusing on condoms and contraceptives would be exempted from the order.

And Arrotta? Her own business, Northtown Auto Liquidators, was subjected to an anonymous complaint that she was violating the order. She says she immediately contacted their attorney to clarify to the state that the groups of people spotted in the office actually were employees helping to remodel their showroom.

WHO PAYS THE PRICE?

While businesses that break the governor's order might face greater legal liability if they're sued by a customer who contracts COVID, it's unlikely that many rebellious businesses will pay a price.

Spokane Police and the county's sheriff have declined to enforce the rules with anything more than warnings. Theoretically, some of the businesses who violate the stay-home order could lose state-issued licenses or be fined. But Hallum, Inslee's policy advisor, isn't aware of any case where that's happened in Eastern Washington. It's about people keeping people safe, she stresses, not punishing businesses.

Yet, those who were willing to do what Inslee asked them to do, and report noncompliant business, have faced a backlash. Public records requests swiftly revealed the names not only of the businesses facing allegations, but many of those who reported them, exposing them to anger and harassment. Right-wing groups circulated the document, dubbing it the "snitch list."

"I got an email that was just laden with just horrible language," says Miesch, the painting business owner, reciting some choice selections from the email that included the phrase "whistleblowing motherf—-ers."

That wasn't the only threatening message he received.

"I got a letter from the attorney of the developer, threatening to sue me for harassment," Miesch says. He doesn't know for sure if the letter was connected to the complaint, but like a number of the complaining businesses the Inlander contacted, he just wants to move on.

For others, the real injustice isn't the businesses allegedly breaking the rules — it's the design of the rules themselves. Walmart and Target, several point out, have been allowed to continue operating because they sell food and essentials.

And as Idaho has begun to reopen its economy on a faster schedule than Washington, Eastern Washington businesses have to contend with an additional inequity.

"Businesses are watching their customers begin to develop consumer-buying habits across the state line," says Mark Richard, CEO of the Downtown Spokane Partnership, an advocacy group for downtown businesses. "This tension is not going to end well."

He says that he's hearing from some beleaguered businesses that they're considering opening up, whether the governor allows it or not.

"Nobody's complying anymore," says Davis, one of the furniture store owners. "I know people right and left that are just opening up. Our governor's got to relax this." ♦