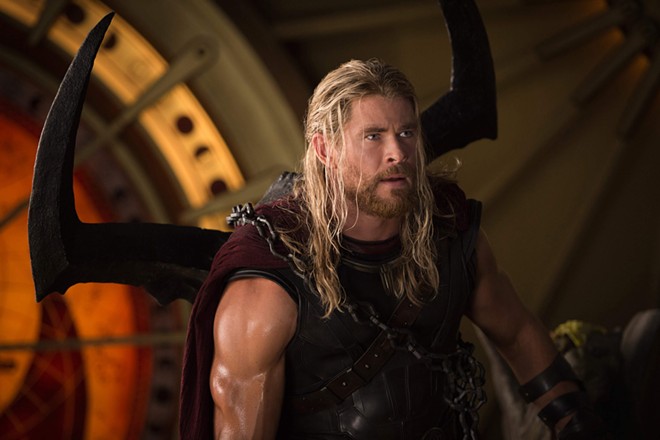 The god-like might of Chris Hemsworth's buffoonery was unlocked in Thor: Ragnarok.

Quick — what's your favorite climactic battle in a non-Avengers film in the Marvel Cinematic Universe?

If you're a casual moviegoer and not a superfan who watches each movie dozens of times, can you describe any of those big fights — apart from the Avengers tentpoles of the Battle of New York, Endgame's Battle of Earth, and maaaaybe Age of Ultron's Battle of Sokovia — in vivid detail? I'm betting you can't.

It's not that these moments of combat aren't thrilling theatrical experiences in the moment, but for all their cinematic spectacle (which admittedly can get bogged down in CGI overkill at times) they've never been the real reason the MCU works.

The key to the MCU isn't epic superhero feats.

The key to the MCU is character-building comedy.

It was clear this was the case from the jump. The opening scene of Iron Man — the first MCU entry — finds Robert Downey Jr.'s Tony Stark snarking it up in the backseat of a military convoy. Nothing that leaves his lips isn't a joke. In under two minutes he establishes his arrogant bravado with around a dozen jokes about Maxim models, MySpace, and peace signs before the convoy is surprise attacked.

Humor is the bedrock upon which the MCU's comic book pop culture leviathan was founded, and it remains the case to this day. The moments that people return to are the ones where comedy breeds a warm connection with these superpowered heroes.

That's part of the reason why the DC Extended Universe pales in comparison to Marvel's cinematic imprint. Rather than colorful comic book mirth, DCEU titles like Man of Steel, Batman v Superman, and Justice League leaned into a gritty testosterone-fueled violent realm that always seemed to be trying too hard to be "badass." It's no coincidence that the only good films in the DCEU are the ones that are far more feminine and/or funny: Birds of Prey, Wonder Woman, The Suicide Squad. (It's also not a coincidence that audiences and critics did not dig 2021's Eternals, the MCU movie that feels most like a DCEU film thanks to its largely humorless tone.)

In the MCU, we adore Chris Evans' Captain America because he's an uncool out-of-time dweeb who delights when he understands a reference, enjoys volleying back Stark's verbal jabs, and can dryly nail PSA videos about high schoolers' changing bodies.

The Guardians of the Galaxy became a hit despite being relative unknowns outside of comic book nerds because writer/director James Gunn treated the movies like action comedies where a bunch of unlikely buddies bust each others' chops the entire time (with Chris Pratt's Starlord as the cocky space dufus, Dave Bautista's Drax as the overly literalist straight man, a sly-talking racoon and one-sentence-talking tree).

Most everyone agreed Ant-Man was better than it needed to be because it embraced its inherent absurdity and visual size-based gags. Paul Rudd can always get across overwhelmed humor, and even side characters like Michael Peña's speed-talking Luis had fun recurring bits.

Tom Holland became the best cinematic Spider-Man because he could authentically pull off both Peter Parker's awkward teen mishaps and the wise-ass taunts that Spidey fires off with a frequency that rivals his web-shooting.

Even Black Widow and Hawkeye were able to occasionally draw humor from being the normies in the realm of ultra-powered costume-wearers. And their perspective is kind of crucial. The comedy makes the titans feel human and relatable. Without the jokes, they'd feel like hollow vessels of power.

The Norse god amusingly tries to find his place in the universe in Thor: Love & Thunder.

No character embodies the importance of humor in the MCU like Thor. Director Kenneth Branagh tried to take the character in a Shakespearian direction in 2011's Thor. The origin story had some fish-out-of-water humor when Chris Hemsworth's God of Thunder ended up in a remote New Mexico town, but it was mostly self-serious in trying to build up this mythological figure and his Asgardian lore. The sequel Thor: The Dark World — still the worst MCU movie — took things in an even moodier, less fun direction. It didn't help that Thomas Hiddleston's Loki, Thor's half-brother/rival, was allowed to chew up the scenery with trickster charm and wit. While Hemsworth would occasionally show charismatic flashes in Avengers films, his Thor still felt like a comparatively dour cardboard cutout when placed next to Iron Man or Captain America.

That all changed when director Taika Waititi took the helm of the third Thor film, 2017's Thor: Ragnarok. With the help of screenwriters Eric Pearson, Craig Kyle and Christopher L. Yost, Waititi took the stoic shackles off both the Norse god and Hemsworth. The creative team figured out that the best way to maximize Thor as a character (and use Hemsworth's charm) was to allow him to be an irreverent doofus. Rather than brood and toil about his plight, he'd mock most obstacles in his path. Why be concerned when you're a literal god after all? Working from that position means that every time things don't come as easily as his arrogance would suggest, he delightfully looks like a fool. And "delightful fool" is Hemsworth's acting wheelhouse. 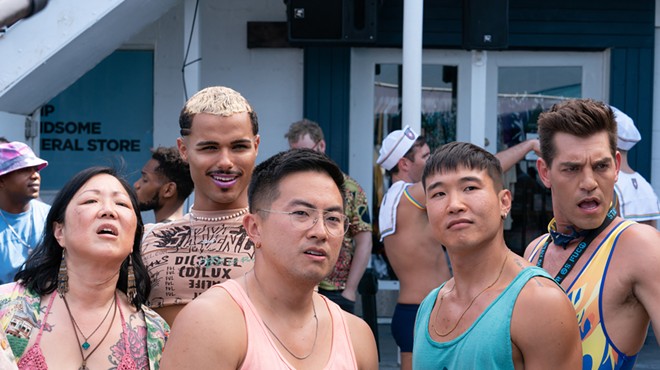 Ragnarok featured moments of hilarity beyond its titular star, ranging from Loki putting on an Asgardian play recasting himself as a hero played by Matt Damon to the drunken sloppiness of Valkyrie to the physical comedy of Bruce Banner splatting on Asagrad's rainbow bridge instead of instantly turning into Hulk. The film also reveled in quirks of Korg, the friendly rock-man arena battle revolutionary (voice by Waititi), and drank in a heightened version of Jeff Goldblum's signature eccentricity as the Grandmaster. In short, Ragnarok had so much fun being silly. Both critics and audiences ate up the newly comedic Thor, making the film a box office smash, one which is almost universally held up as one of the MCU's high points.

That all leads us to the most widely anticipated movie on the summer blockbuster calendar, Thor: Love & Thunder (July 8). A lot has happened in the MCU since Ragnorak — that whole Thanos eradicating half the universe's population before the Avengers saved the day thing — and the new film looks to have Thor trying to find inner peace and his place in the cosmos while shying away from battling. A chill, battle-adverse superhero offers plenty of comedic (and potentially romantic) fertile ground, but the film is also playing off writer Jason Aaron's acclaimed "The God Butcher" story arc for the Thor: God of Thunder comics. That being the case, there could be serious brutality via the villainous Gorr the God Butcher, played by Christian Bale in his post-Batman return to the realm of caped crusaders. Regardless, early trailers show Waititi (who returns as director and co-writer) will maintain the comedic tone that truly unlocked Thor as a character.

The MCU may be loaded with vibranium shields, power suits, infinity gauntlets and mystical hammers, but the most powerful weapon in its arsenal remains a well-placed joke. ♦

Seth Sommerfeld is the Music Editor for The Inlander, and an alumnus of Gonzaga University and Syracuse University. He has written for The Washington Post, Rolling Stone, Fox Sports, SPIN, Collider, and many other outlets. He also hosts the podcast, Everyone is Wrong...
More
<div class="Zon