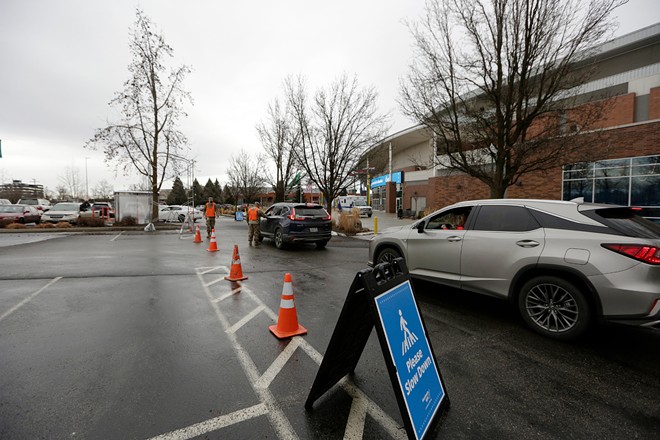 Here's what we know: This week, Spokane County got 4,600 additional vaccine doses.
We know that 4,000 went to CHAS Health's mass vaccination center at the Spokane Arena.

But we don't know where the other 600 went, because the state of Washington won't tell us — or even tell the Spokane Regional Health District.


"Washington State Department of Health does not share allocations to individual providers," Danielle Koenig, the department's health promotion supervisor, wrote in an email.

Yet the question of who gets vaccine doses — and how many — is a vital one. If the public knew which clinics were getting the most vaccines, they could know where to focus their efforts to get vaccinated.

How many vaccines are being sent to Costco? To Providence? To MultiCare?

Right now, it's not something the state is publishing — though on Thursday, Gov. Jay Inslee suggested the state might be changing that in the future.


On vaccine questions, the Department of Health has consistently declined one-on-one interviews requested from the Inlander, only agreeing to answer questions by email or during limited press conferences — formats that constrain follow-ups and make it difficult to hold public officials accountable.

Nevertheless, in email follow-ups, the Inlander pressed the department to elaborate on why they weren't sharing information about how many doses were being received at each facility.


In a response that incorrectly referred to Spokane as "Snohomish" County, Koenig wrote that they "do not share county-level or facility-level allocations because they are constantly changing and transfers are happening frequently and rapidly."

"The numbers also come from multiple systems and would have to be manually added together, so with that plus the changes, any number we collected/created would be inaccurate by the time we shared it," Koenig writes.

From the outside, it's difficult to say whether such a technical problem is insurmountable. The state already does report a large swath of data on its vaccine dashboard and has even partnered with Microsoft for technical support.


Yet, even old numbers would help journalists answer questions about, for example, how frequently and rapidly numbers are changing or transfers are happening.


It would help journalists answer questions about how equitably the vaccines are being distributed. Is the rollout benefiting White and wealthy people more? Or is a focus on trying to be fair slowing vaccination down for everybody?

It would provide scrutiny, not just to Inslee's rollout, but to the providers who've obtained vaccine doses. As the Seattle Times reported, three different west-side providers quietly awarded early vaccination access to board members, volunteers and major donors before the general public.

"There have also been privacy and security concerns about sharing facility-level data," Koenig writes. "Some providers choose to self-disclose and that is fine."


The vaccine dashboard does share a number of sites statewide that are eligible to receive vaccine doses. But that only includes providers who have "opted in," Koenig writes.

In other words, the public isn't even necessarily told about all the vaccine providers in the state, much less how many doses those providers are receiving.


"Some providers may have opted out because they have not have been getting vaccine (we have over 1,100 registered providers and not all of them get allocations every week)," she writes. "Others may already be booked way out for appointments (we know some are booked months out already) and can’t take more folks at this time, or they may be small clinics that don’t have the capacity to handle or schedule the incredibly high volume of inquiries that comes with being on the list."

In other cases, she writes, it wouldn't make sense to include pharmacies that are only serving long-term care facilities or vendors who don't actually have their own vaccination site.


"We do hear about what others are getting,” says Dr. Francisco Velázquez, interim health director of the Spokane Regional Health Department. “Not because we get the information [directly from the state], but because we're in constant communication and collaboration with our health care partners.”

This week, for example, SRHD spoke with fellow vaccine providers CHAS Health, Providence and MultiCare to establish that, besides the 4,000 to the Arena, the state hadn't sent them new doses for unvaccinated patients this week.

Still, the health district doesn't know whether those providers have received any doses for patients who need their second shot, whether other providers in the county may have received doses, or where the 600 doses not being sent to the Arena were being delivered.


“We talk about it very openly, as we are providers; but the Department of Health, I have not asked them that question specifically," Velázquez says.

At an online press conference on Thursday, the Inlander pressed Gov. Inslee on whether the state should change its policy, and publish the number of doses each provider receives.

"We're always looking for ways to improve both transparency and information to the public, but also our providers. That may be something we approach," Shah says. "Right now, we haven't been able to do that for a number of reasons including some of the ways the allotments are coming in, and just the rapid turnaround from when we get the information from the federal government to us. But hopefully, that's going to improve over time."

"These are people who are working literally day and night. As soon as they get an allocation from the federal government, they've got to make very quick decisions for the reallocations," Inslee says. "The thing you're talking about sounds like something that would be useful. But it's just a capacity issue, I suspect. But we'll think about that."