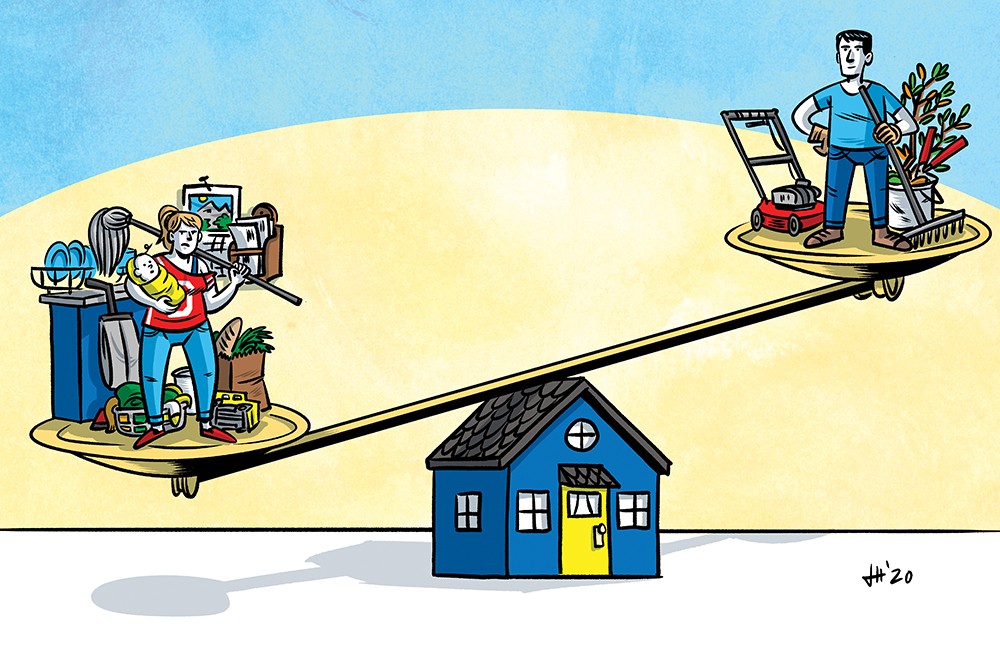 Jonathan Hill illustration
A 2018 survey from the U.S. Bureau of Labor Statistics found women spent an average of 2.17 hours a day on housework while men spent about 1.36 hours on average.

Sugar cookies sit next to snickerdoodles on the cooling rack. The dishwasher hums away at cups and cutting boards. Late at night, after the children have gone to sleep, their tiny laundry spins in the dryer downstairs. And my wife, amid the slam of semester-end grading, hunches over the kitchen table, still meticulously wrapping Christmas presents.

For my part, I cooked dinner, bathed the children and helped put them to bed. I inventory whether we have enough gas in the car, food in the fridge or ibuprofen in the medicine cabinet.

A functioning family household takes a great deal of work — physically, intellectually and emotionally. Marybeth Markham, a licensed mental health counselor in Spokane, explains that how parents split those responsibilities can have a huge effect on their relationships.

Division of household labor, she says, might be the biggest reason couples look to her for help. There's so much to do and neither parent feels like they get enough help. Resentment spikes over the smallest of jobs.

"Everyone's exhausted," Markham says. "People will come in with their lists [of chores]. It's like a fricking mediation... They don't have to do that."

But parents should talk about who does what and why, she says. Researchers have found that modern couples often start sharing household duties quite evenly, but once children arrive the labor tends to shift more heavily toward a primary caregiver, almost always the mother.

A 2018 survey from the U.S. Bureau of Labor Statistics found women spent an average of 2.17 hours a day on housework while men spent about 1.36 hours on average. Women spent three times as many hours on both interior cleaning and laundry as men. They also spent twice as much time as men on food preparation and clean up.

In homes with children younger than 6, women spent on average 1.1 hours a day on primary care like bathing and feeding, the 2018 survey stated. Men spent just 26 minutes a day on such activities. The survey found men are more likely to spend time on lawn care or leisure time with the children, like sports.

Darcy Lockman, author of 2019's All the Rage: Mothers, Fathers, and the Myth of Equal Partnership, interviewed dozens of women about how they have struggled against assumed gender roles that expect mothers to serve as both full-time breadwinner and primary caretaker in the home.

Just because modern men will change diapers, Lockman writes, does not mean they have stepped up to bear their share of the playdate planning, school event scheduling, clothes shopping or child care management.

"They were more involved than fathers of yesteryear," she writes. "This more was not enough."

Mothers also face harsher judgment than fathers over the state of the home. A 2019 experiment that showed people pictures of clean or messy rooms supposedly occupied by men versus women concluded that women faced more negative social consequences for untidy homes as well as higher overall expectations for cleanliness.

Markham, who counsels a number of same-sex couples, argues many of society's assumptions on parenting will also push those couples to adopt a traditional — and uneven — division of labor. People will ask her same-sex patients, regardless of gender, which one is the "woman" in the relationship.

"They can get a lot of push back," she says. "Society really wants people to be classified."

Transgender parents, she noted, also sometimes struggle with whether they can still take on the same jobs or roles in their children's lives.

"You get to do whatever you want to do," she emphasizes, "regardless of gender."

Markham explains that most of these assumptions spring from how people grew up seeing gender roles portrayed in their home and media. She suggests couples take a hard look at why each partner has taken on a job in the home. Do they enjoy that task? Do they have a particular skill for it? Or did it just default to them amid the sleep deprivation of a new baby?

"What I encourage them to do is create a new story that works for them," she says. "Play to your strengths... It can be this amazing opportunity for growth as a couple and as a family."

Experts recommend getting fathers more involved earlier in parenthood. With increased acceptance of paternity leave, both parents can invest equally in the crash course of newborns, so they both feel confident taking on childcare tasks and those jobs don't default to mothers. An Icelandic trial of extended paternity leave showed increased longterm parity in household labor.

Couples can make sure both parents get plugged into newsletters, email notifications and group texts on their children's activities. Parents can also look for opportunities to rotate or backfill jobs that have fallen on the other partner.

Markham says the most important thing is talking about how the division of household jobs reflects each family's values. That could mean very strict equality. It could mean sticking to traditional roles. It could mean hiring some outside help to take over jobs you both disdain. But scrutinize your status quo and talk through what you both need.

"Hearts are broken every day over something as simple as, 'I can't believe he didn't pick up his shirt,'" she says. "It's just being honest with each other and being vulnerable. It's just hard."