Young Kwak
When Phil Tyler lost his son to suicide, he reached out to a Gonzaga parent, who'd also lost his son.

Phillip Tyler is in his son's bedroom at his old house,

pleading with his friends in law enforcement to let him see his son. He needs to see Devon's body out in the garage, he thinks, to make his 22-year-old son's suicide seem real.

His voice rises as he argues with them: "I'm his father. I'm going to see my son. Nobody is going to stop me from seeing my son!" Tyler recalls saying. "It needs to be real to me."

At first nobody can persuade him otherwise — not the cops, not the medical examiner, not the sheriff's chaplain, not the fire chief.

So his wife, the woman he'd just married, gets someone he'd listen to on the phone: Sheriff Ozzie Knezovich, his old boss, his mentor for more than a decade.

"He said, 'I need you trust me today,'" Tyler remembers Knezovich saying. "'You don't want this to be the lasting image of your son. I've done this too many times, with too many parents.'"

Today, Tyler is glad he listened. Since that painful day in November, there's been an outpouring of compassion and advice from friends and colleagues like Knezovich, people offering solace in the face of his grief.

But there's one person in particular who's helped him keep it together: A stranger he'd just met five weeks earlier.

Their backgrounds are radically different: Phillip Tyler is a black man, a Gonzaga campus security officer, who stepped down as president of the local NAACP chapter to plan a Spokane City Council run. Philip Martin is a white man, a globe-trotting company executive at a Boston-based manufacturer of laser and medical products.

But they've been brought together by the similarity of their excruciating loss. Martin also lost his son, a 20-year-old Gonzaga student, to suicide.

In the months since, they've clung to each other in their pain. They text each other in difficult moments, talk on the phone, work through the rawness of their grief.

And when they learned this month that another young man in Eastern Washington had committed suicide — Washington State University quarterback Tyler Hilinski — it released a flood of emotions all over again for both fathers.

"It all came rushing back," Tyler says. "It made me scared for the rest of the community — is there going to be another one? And how can we stop it?"

They want to find a way to reach out, to be there for his parents like they were there for each other. 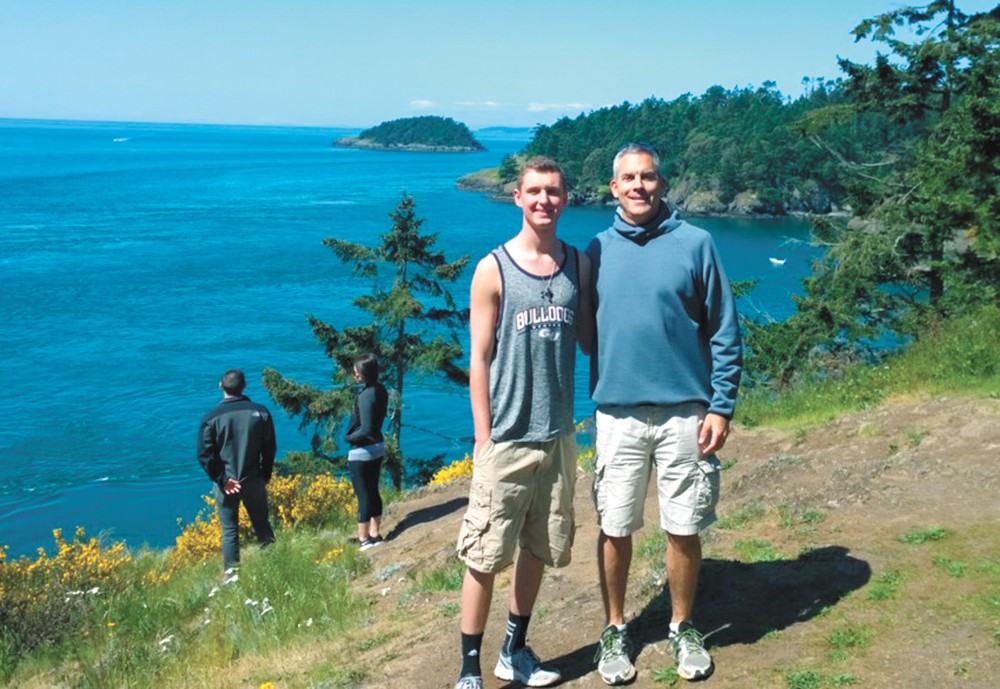 courtesy of Phillip Martin
Philip Martin and his son, Chris, in an undated family photo.

Five weeks before his own son's suicide, Tyler gets an assignment from Gonzaga's director of security: Take Chris Martin's mom and dad to the room off-campus, the room where their son killed himself, and help them pack up his possessions.

Tyler watches Chris' mother weeping as she gathers up what remains in her son's room. His computer. His imitation Rolex watch. The Sony digital camera he just bought that fall.

"I realized that Chris, to his parents, was reduced to, you know, nine boxes and a duffel bag," Tyler says, "and I just started to cry."

They lock arms and pray together with the college chaplain. Sunglasses obscure Tyler's teary eyes.

As a parent, he can't imagine ever having to go through what the Martins went through. He's shaken. He texts his kids to tell them he loves them. He talks to Devon on the phone.

"I remember [Martin's] words: 'This is the hardest day of my life," Tyler says. "Those just rang in my ears all day long."

And then that day comes for Tyler.

At first, Tyler doesn't talk to anyone about his son's suicide. Calls and messages come in but he doesn't answer. He can't.

Devon had left a note — and several videos on his smartphone — aimed at easing his parents' guilt, trying to assure them it wasn't their fault, that he loved them, but never really explaining why. Devon tells his parents he doesn't want them to mourn or grieve.

But of course they do. Tyler's angry, he's wounded. It's a more intense pain than he's ever experienced. When he's sedated for a colonoscopy the day after, it almost feels like a blessing.

He doesn't eat. He doesn't sleep. The notion of sleeping feels crass, almost a betrayal of his own pain.

"I'm not going to sleep," he tells his wife, "because my son never gets to wake up,"

For a time, he doesn't tell anyone what happened. And then he can't take it anymore. He needs to talk to someone who knows exactly what the hole inside him feels like.

So he calls Martin. At first, he greets him like everything's fine. But then: "I lost my son from suicide, just two days ago—"

That's when the dam breaks, and he loses it again. These aren't subtle tears. It's ugly, messy, wailing.

"You no longer have to wear that mask of toughness, if you will," Tyler explains later. "You're with someone who could really know what you're going through, who showed his humanity and vulnerability in front of you."

In these situations, no one knows what to say, Tyler says. But Martin did. He'd lived it.

"You're going to go through emotions. Don't beat yourself up about the 'why,'" Tyler remembers Martin saying. "There's not going to be an answer."

He tells Tyler to rely on his community around him. He tells him not to feel guilty for those brief moments when he feels happy. He urges him to believe that Devon and Chris are in a better place.

"It probably kept me from going down a spiral of depression," Tyler says. Other people had given a lot of the same advice, of course.

But the power of their conversations, Martin tells the Inlander, wasn't necessarily what he said or what Tyler said. It was the embrace of solidarity of someone who's been there.

Together, they know about the rush of complicated emotions that comes with being a "suicide survivor."

Almost daily, Martin checks in on Tyler, particularly as they go through difficult milestones. When Tyler posts a Facebook message pouring out his emotions, Martin calls it "powerful."

After Tyler finally sees Devon's body laid out at the funeral home, Martin shares his own experience seeing his son's coffin.

"It was one of the times I felt most sad, most angry, most afraid, most in disbelief and when I missed him the most," Martin texts. "But I also thought of him in a place of healing and love."

"It will be hard for us tomorrow starting 2018 without our beloved sons," Martin texts Tyler on New Year's Eve. "Hope you are with family and friends."

"It is, as you say, a bit strange," Tyler says in his message back. "Seems new but the old hurt remains."

Tyler's sitting his kitchen table with his wife as he talks to Martin, his phone balanced on his balled fist, a childhood picture of his son behind him.

"How ya doing?" Martin asks.

They talk about what they've heard from media coverage about Hilinksi's death. All three of these suicides were young men, all likely struggling with something deep inside them.

"Our sons probably had this impression they wanted to convey that everything was OK — they probably tried to hide their pain," Martin says.

Chris had grappled with "reactive attachment disorder," stemming from trauma he endured as an infant before the Martins adopted him, all his life. Tyler, however, doesn't have a simple diagnosis he can point to with Devon.

"He was just tired," Tyler believes. "He couldn't reconcile with the way this world had become. He felt he didn't give enough — although he gave everything."

The Hilinskis weren't ready to speak to the media last week, but in a speech to the WSU football team last week, they struck similar notes as Tyler and Martin did: They hope that their son's death can lead to more openness in discussing mental health.

Maybe they can all help each other, Martin and Tyler says.

"Really, those of us, unfortunately, that have experienced this tragedy — the message, and the connection and the compassion that we can have for them is just immeasurable," Tyler says.

The phrase "Life is chaos. Be kind" is stamped into a multi-colored rubber bracelet around his wrist.

In the weeks before his death, Devon started using that phrase everywhere. It was in a text he sent to his dad. Devon wrote it in green dry-erase marker on Tyler's fridge on Thanksgiving — a message Tyler still hasn't erased. The phrase, Tyler learns later, came from comedian Patton Oswalt's raw and grief-stricken Netflix special, recorded after the sudden death of his wife. Oswalt's wife didn't believe that "everything happens for a reason." Instead, life is cruel and doesn't make sense, she would say, so the least we can do is be compassionate.

That's the way these two fathers remember their sons — full of kindness. Devon even talked several of his own friends out of suicide.

"He wanted the world to be a kinder place," Tyler says.

Martin and Tyler channel their grief into activism. The Martins are starting a foundation focused on childhood trauma and reactive attachment disorder.

Tyler is focusing on suicide prevention. He's aiming to get a Suicide Means Prevention committee authorized this week through the city's Human Rights Task Force. He's working with Gonzaga and the Jed Foundation, an anti-suicide nonprofit, to get suicide prevention taught in high schools.

It's not just that: Tyler wants a total cultural demolition of the sort of masculinity that is afraid to seek help.

"For me, for an African-American male, I've been raised, just like many in communities of color, to display a strong mask," Tyler says. "Our paradigms of what it is to be a man not only needs to shift, they need to be destroyed."

Something, both fathers say to each other, needs to change.

"Ultimately, it's the same story, over and over," Martin says to Tyler.

If you or someone you care about is contemplating suicide, please seek out professional help or call the National Suicide Prevention Lifeline at 1-800-273-8255, or text the Crisis Text Line at 741741.