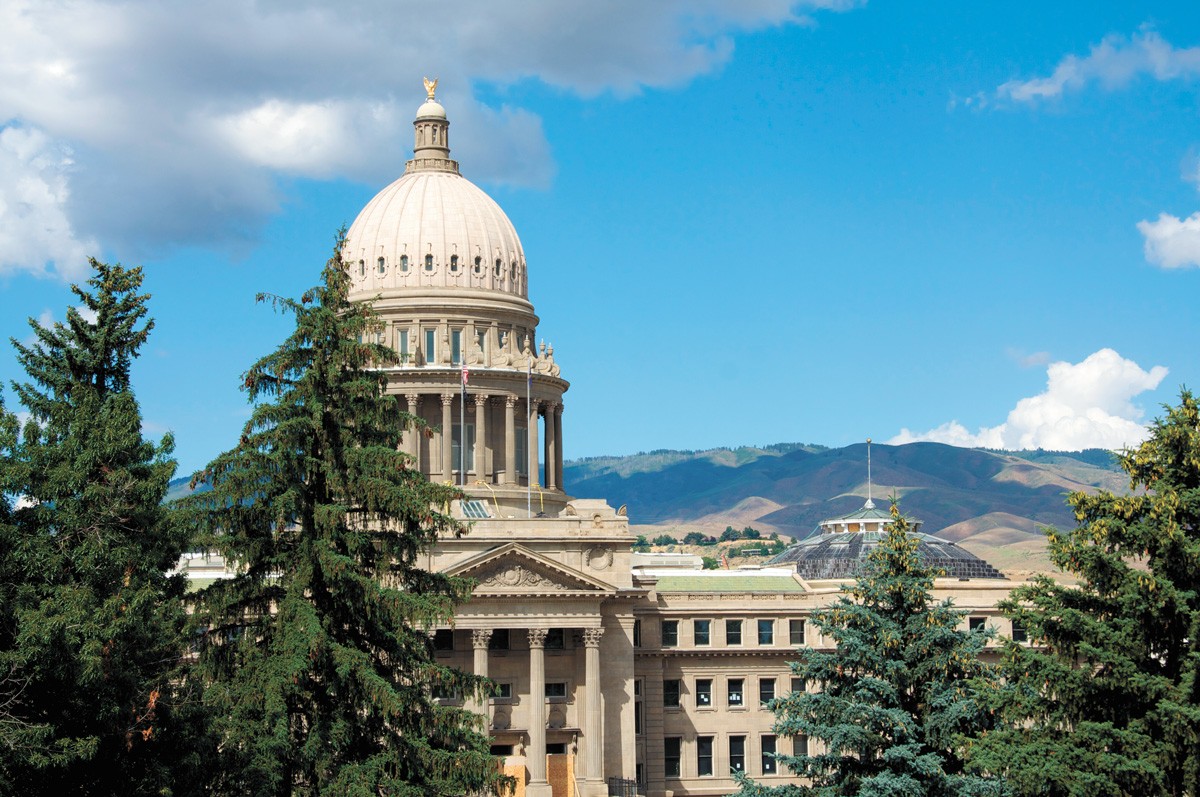 At the Idaho Capitol, Republican legislators have assailed Boise State University for its left-wing tilt, pointing to incidents like student protesters targeting a campus coffee shop last year for being too supportive of police.

It's the kind of report that begins with a quote about good and evil from Alexander Solzhenitsyn, uses little Black Lives Matter fist logos as its bullet points and declares, in bold, that "social justice education poses a threat to education in America and to the American way of life."

"Social Justice Ideology in Idaho Higher Education," a December 2020 report published by the right-wing Idaho Freedom Foundation, condemns what it sees as a toxic ideology — dividing the world into "aggrieved minorities and oppressive majorities" — infesting Idaho's college campuses. But it goes beyond merely tallying up courses that push concepts like "diversity," "equity" and "White privilege" — it recommends a government crackdown on them.

It calls on Idaho's Legislature to take more direct financial control of the state's colleges, "penalizing universities that continue to emphasize social justice education" and directing them to "eliminate courses that are infused with social justice ideology."

Then, in the very next paragraph, without a hint of irony, the report calls for protecting free speech on college campuses, recommending the state pass model legislation from the Foundation for Individual Rights in Education.

But far from cheering on the report, FIRE President Adam Steinbaugh was disturbed by the direction Idaho's conservative culture warriors have taken lately.

"It's been really dispiriting in the last couple of months. A number of legislatures have really ramped up efforts to try to restrict speech in higher education," says Steinbaugh. "I think the most notable approach has been in Idaho."

This year, as the Washington Legislature passed a bill to mandate student and faculty training programs intended to eliminate "structural racism against all races," Idaho's lawmakers have been heading in the opposite direction, passing Freedom Foundation-inspired bills framed as combating left-wing racial justice ideology in Idaho's universities.

In March, a legislative committee cut $409,000 from Boise State University and outright banned any money from the state, student fees or tuition from going "to support social justice ideology student activities, clubs, events and organizations on campus."

Steinbaugh sees a clear connection to Boise State University's sudden decision to cancel dozens of diversity-related classes that same month. Boise State administrators had received an unverified report of a video showing a White student being degraded or humiliated in one of the school's core diversity-related courses.

Not knowing which class, student or teacher was involved — if any — Boise State took the radical step of canceling all 52 diversity classes in an abundance of caution. With an independent investigation underway, the classes have since restarted, but only in an online, prerecorded format.

That pressure is only increasing: Just last month Idaho Lt. Gov. Janice McGeachin launched a committee intended to root out unAmerican activities: a "Task Force to Examine Indoctrination in Idaho Education Based on Critical Race Theory, Socialism, Communism, and Marxism."

"It's a real throwback to the Red Scare era," says Steinbaugh.

Media outlets, he says, often tend to cover academic freedom through the lens of right-wing university critics. But he says the pressure to whittle away free speech rights on college campuses is bipartisan.

Four years ago, Boise State University political science professor Scott Yenor was the one at risk of being censored.


In 2017, Yenor published a post at the conservative Heritage Foundation's Daily Signal blog titled "Transgender Activists Are Seeking to Undermine Parental Rights" that not only hit the trans rights movement, but also gay rights and feminism as well.

Students started a petition to get him fired. A faculty member wrote a rebuttal connecting his rhetoric to the neo-Nazis marching in Charlottesville, Virginia. But while some in the Boise State faculty senate raised concerns about Yenor's writing, ultimately he never faced any official reprimand or punishment.

The dean of Yenor's department wrote a Facebook post that disagreed with Yenor's column, but also fervently defended his academic freedom and the value of "robust discussions" around controversial views.

"Giving the authorities the power to sift through classroom speech to determine whether it is 'political' is dangerous and chilling."

"It could have been a lot worse," Yenor says.

Yet today, as one of the co-authors of the Idaho Freedom Foundation's "Social Justice Ideology" manifesto, Yenor is taking aim at some of his Boise State colleagues' own controversial views. He's the one connecting their rhetoric to extremism, linking the "totalitarian temptations" of "social justice education" to last year's riots in Portland, Seattle and Minneapolis.

Yenor offers a disclaimer that he doesn't endorse the recommendations to the Idaho Legislature in the report, but he doesn't oppose them either. He argues that pushing back against a "pernicious lie" taught in mandatory Idaho college courses is a value that supersedes academic freedom.

"The question of whether the public should fund a political agenda is a different issue from free speech," Yenor says.

But Steinbaugh says that's a dubious distinction to draw.

"Giving the authorities the power to sift through classroom speech to determine whether it is 'political' is dangerous and chilling," Steinbaugh says. "Tying a university's funding to a requirement that particular viewpoints be omitted is censorship."

But what about in Washington state where the Legislature passed a bill requiring explicitly antiracist training courses to be mandatory on college campuses? It depends, Steinbaugh says.


They can offer a point of view, but they can't, say, require students or faculty to proclaim that America is a racist country.

"Similar to how a high school can't require students to stand and salute the flag in the morning, you can't compel speech about what people believe," Steinbaugh says.

The law's sponsor, Washington state Sen. Emily Randall, assures the Inlander that they're "not talking about signing a pledge or taking a Girl Scout's oath."

Yet she also indicates it's not intended to be a "colorblind" training focused on treating everyone the same. It's about "confronting our system that is built on the foundation of racism," she says.

And so as she was pushing this bill, she says she got a lot of pushback referencing "critical race theory."

"It's a buzzword people have latched on to," says Washington State University cultural studies professor Amir Gilmore. "A few months ago it was Dr. Seuss and Mr. Potato Head."

"Critical race theory" goes back to the mid-1970s as legal scholars attempted to explain why so much inequality remained even after explicitly discriminatory laws were changed. Our country's racist roots remain embedded in cracks and crevices everywhere, they concluded, and we need to find them and uproot them, not ignore them.

But even from the left, it's an approach that can get criticized for focusing too much on racism at the expense of other factors, like gender, sexuality, or — especially — economic class. As a number of high-profile liberals — a Democratic pollster, a New York Times writer, a Slate podcaster — have lost their jobs over the past year for running afoul of changing standards in how to discuss racial issues, some have charged that critical race theory had gone from a provocative critique to new kind of cultural censorship. At other colleges, Steinbaugh says, there have been efforts to punish professors for even quoting racial slurs when discussing something relevant to the material, like a Supreme Court case or Martin Luther King Jr.'s writing.

From the right, critical race theory has long been condemned as its own form of racism, stereotyping people by the color of their skin instead of judging them as individuals. Last year, the Trump administration attempted to ban diversity training based on "critical race theory," arguing that it was "divisive, anti-American propaganda."

And so this year, Republican-controlled legislatures across the country tried their hands at their own bans.

On April 22, the Idaho Legislature passed a bill targeting "critical race theory." As they debated, more than one representative accused the state's schools and universities of "indoctrination." Idaho Rep. Heather Scott, R-Blanchard, claimed a substitute teacher told her that the classic novel To Kill a Mockingbird was being used to teach students "White people are bad and Black people are innocent victims."

Instead, it says schools can't direct or compel students to "personally affirm, adopt, or adhere" to ideas that it claims are "often found in critical race theory," like the notions that one race is inherently inferior to another, should be treated worse than another, or was inherently responsible for the historical actions of that race.

But Vanessa Anthony-Stevens, a University of Idaho professor of social and cultural studies, says that's an "inaccurate reading of critical race theory."

"This is why this is particularly perplexing, baffling," she says. "This legislation looks like it supports a lot of things that I believe in."

Compelled speech is already illegal — and unconstitutional — in Idaho schools. The new law left faculty members at both Boise State and the University of Idaho in a state of uncertainty.

"Teachers are reaching out to me and having meetings fearful about how they need to change their curriculum, and I keep telling them, 'You don't have to change anything,'" Anthony-Stevens says. "But they are scared, and their administrators are scared."

The result, she says, has been a "general malaise of censorship." One group she's part of quickly stripped suddenly fraught words like "equity" and "social justice" from their position statements.

"It's going to threaten minoritized groups," Anthony-Stevens says. "It furthers a lot of the covert oppression that we've been struggling with throughout our history." ♦