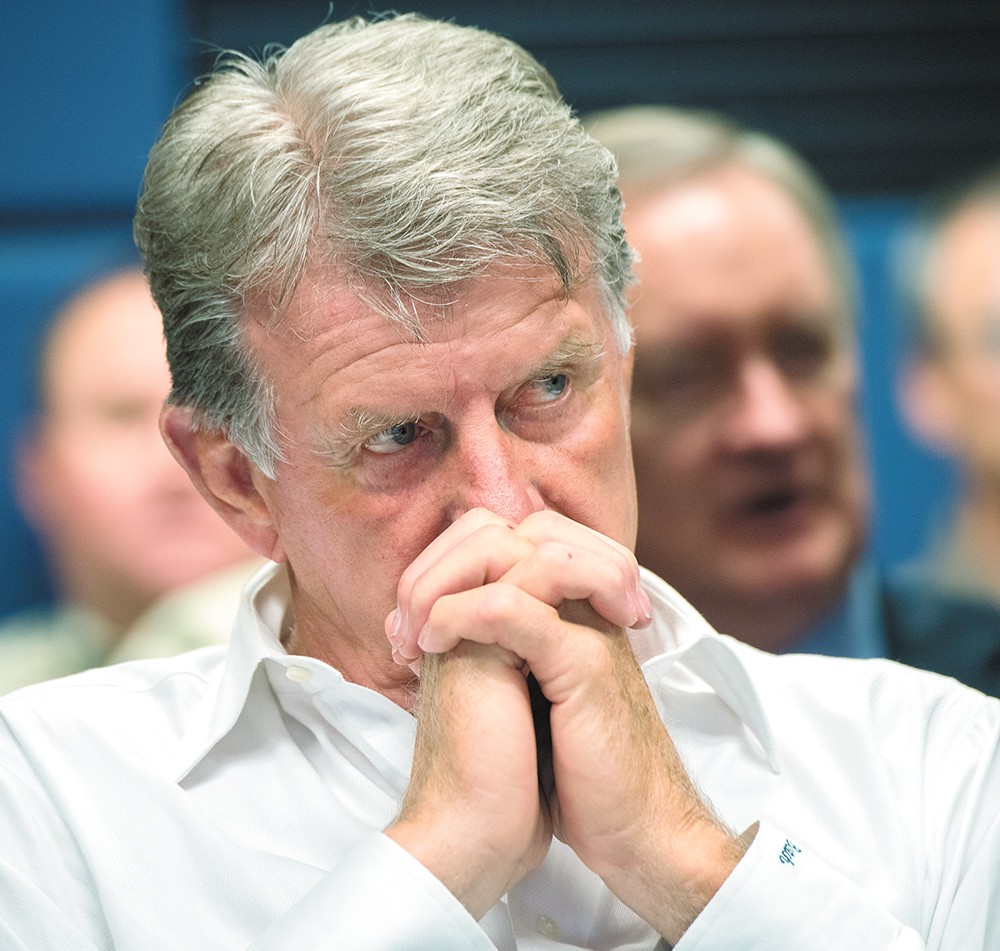 In his last year as Idaho governor, Butch Otter hopes to finally close the gaping hole in the Idaho health care system.|

If only Jessica Rachels lived in Washington state,

she and her husband would have health insurance. In Washington state, her family's below-the-poverty-line income — around $25,000 for her family of six — would instantly make her eligible for Medicaid.

But she doesn't live in Washington. She lives a few dozen miles to the east, in Idaho, and because the state chose not to expand Medicaid under Obamacare, adults in a family of six whose adjusted income is more than $7,080 a year are generally considered flat-out too rich to be enrolled in Medicaid.

Rachels is the caregiver for her disabled daughter — who thankfully does qualify for Medicaid — and she's worried that it's taking a toll on her health. A surgery to fix excruciating foot pain would cost around $20,000, a luxury far out of her reach. The cost of even going to a sliding-scale health clinic is often too much for a checkup.

"We don't go unless there's an emergency," Rachels says. "We'd rather put food on the table, pay our bills and groceries."

Now, the really bizarre thing: Her family actually doesn't make enough money to qualify for tax-credit subsidies that could help them to buy insurance on Idaho's health exchanges. If she had made more money or had fewer kids, the government might help her out.

For now, she's stuck with at least 50,000 other Idahoans in the "Medicaid coverage gap," trapped in a no man's land where their meager wages qualify them for neither Medicaid nor health-care subsidies.

Years of attempts by some Idaho legislators, activists and government staffers to fill in that gap have been unsuccessful. But now, the state of Idaho is floating a solution that may be their best shot yet.

"This is not expanding Medicaid," Idaho Gov. C.L. "Butch" Otter proclaimed in his final State of the State address this month. "This is providing Idaho's working families who have modest incomes a more affordable way to get the coverage they need."

But to pull it off, they've got to first convince the Trump administration and a deeply conservative legislature to let them do it.

Obamacare wasn't supposed to have big holes in states like Idaho.

When the controversial law was designed, it intended to span the insurance coverage gap by building a bridge, of sorts, from two sides.

What they didn't count on was a Supreme Court decision allowing states like Idaho simply to refuse to extend their piece of the bridge. For deep red states, the association of the Medicaid expansion with Obamacare, combined with the taint of government-sponsored health care, was too ideologically toxic to consider.

It's resulted in these absurd scenarios where Idaho families suddenly lose access to federal subsidies because they have another kid and fall below the federal poverty level.

Former Idaho Department of Health and Welfare Director Richard Armstrong says Idaho's decision not to expand Medicaid didn't reduce health insurance costs for the rest of the market. Instead, the opposite happened.

"Oregon and Washington expanded Medicaid. Idaho did not," Armstrong says. "What's happened in the last three or four years?"

Idaho watched its health-care costs on the exchanges soar past Washington and Oregon's, he explains.

There's a reason for that, says Brian Whitlock, president and CEO of the Idaho Hospital Association. The uninsured are incredibly expensive on the system.

"They end up getting it in the most expensive and most inefficient way possible by going to an emergency room," Whitlock says.

But a plan came together last year, Armstrong says, when his staff noticed two quirks in the current law: Obamacare actually already allowed the legal non-citizens below the poverty line who weren't eligible for Medicaid to get health-care subsidies.

"It doesn't seem fair that a legal alien in Idaho can buy subsidized insurance and a citizen cannot," Armstrong says. It simply made logical sense to get permission to expand those subsidies to the other working Idahoans stuck in the insurance gap.

Armstrong says another idea came last April, in the Idaho Health and Welfare offices. Idaho's Medicaid administrator mentioned that existing law already allowed many breast and cervical cancer patients to be enrolled in the state's Medicaid program, despite being above the federal poverty level.

"We all stared at each other," Armstrong says. "Why was that the only one?!"

Then came the epiphany: Why not put the sickest Idahoans, the ones with the diseases that are the most expensive to treat, on Medicaid?

Turns out, if you put people with illnesses like stage-four cancer, blood and immunity diseases, cystic fibrosis, multiple sclerosis, end-stage liver disease on Medicaid, premiums for everyone else would fall, Armstrong says.

Idaho estimates that their plan would make private insurance on the individual market cost 20 percent less. And because lower rates mean the government has to spend less on tax-credit subsidies, theoretically, it wouldn't cost Idaho an extra dime.

In all, Armstrong estimates, the proposal would result in around 35,000 more Idahoans with insurance.

It's uncertain, of course, whether the Trump administration, which has sought to undermine the legacy of his predecessor, will approve such a waiver. Armstrong says the lack of response from the feds has been frustrating. But if it works out, he says, Idaho could be a nationwide example.

"There was no one else that is going down this path," Armstrong says. "I would say any states that haven't expanded Medicaid should look at what we're proposing."

In the meantime, activists have been impatient. At a recent town hall meeting, Idaho state Sen. Luke Malek — who's running for Congress — was presented with a petition to put a straight-out Medicaid expansion on the ballot. He declined.

"I don't think that expanding Medicaid under the Affordable Care Act is the solution that Idaho needs," Malek says.

But the dual-waiver plan? It's not his plan, but he likes it. He says he sees "a tremendous amount of potential."

Still, he's unsure about how the plan will fare in the legislature. While he feels the legislature's recognition of the sheer complexity of health care has grown over the years, there are a lot of newcomers.

But Armstrong says that, in his conversations with lawmakers, they've indicated that the proposal is something they can support. Whitlock, the Idaho Hospital Association CEO, is hopeful as well.

"Even though we're a very conservative state, generally our legislators have compassion for the sickest of the sick," Whitlock says

Yet the proposal will face opposition from conservative and libertarian groups like the influential Idaho Freedom Foundation.

"You mean the bailout for big insurance companies? That's what it is. It's all it is," says Wayne Hoffman, president of the Idaho Freedom Foundation. He sees the dual-waiver plan as synonymous with putting more Idahoans on government-run health care and making thousands dependent on Obamacare subsidies.

He blames regulations for the rise in health-care costs. He predicts a slippery slope, where year after year, different types of patients will petition the legislature to be added to the Medicaid rolls.

Indeed, groups like Close the Gap Idaho see the dual-waiver proposal as a good first step, but not the end of the story. There would still be people without access to health insurance. Many expensive illnesses still wouldn't be covered by Medicaid.

"If Idaho is successful in implementing two waivers, we've cleared a couple of hurdles in a 100-meter dash," says Whitlock. "We haven't won the race yet."

Yet government-run health care continues to poll very poorly in Idaho, Hoffman says. If the governor and legislature approve the plan, he predicts, "there will be a pretty serious backlash."

But so far, Armstrong takes comfort in what seems like comparatively mild opposition from Hoffman's group.

"Even the Freedom Foundation, they have not been nearly as negative about this as many things," says Armstrong.

"Insurance of any kind would be amazing," Rachels says. "It is scary when you're a caregiver for two people with two disabilities." ♦

The original print version of this article was headlined "Health Reform, Idaho-Style"