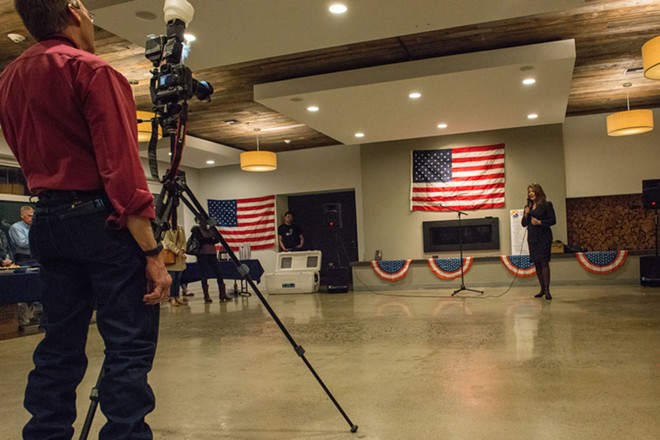 Daniel Walters photo
Janice McGeachin speaks at a small rally in Moscow, Idaho. While McGeachin was resoundingly defeated throughout the state, she did much better in North Idaho.
Idaho voters drew a red line yesterday. They do not support radical extremists or rape apologists.

So voters handily spurned gubernatorial candidate Janice McGeachin, the lieutenant governor who spoke at an alt-right conference, claimed she didn't know it was run by a white supremacist, and then doubled down by inviting three speakers from the conference to her May 4th rally. She got less than a third of the vote, losing by 20 percentage points.

For whittling down her support, she can partially blame what's she's referred to as a "slew of ego-driven fringe campaigns waged by inexperienced eccentrics who inexplicably fancy themselves contenders for the governorship." She had six other candidates competing with her.

But even then, she wouldn't have been able to defeat incumbent Gov. Brad Little, who struck a middle-ground-for-Idaho during the pandemic despite a chorus of outrage from his own legislature — and defiance from his lieutenant governor — and got 52.8 percent, doing just a tad better than his predecessor Butch Otter did against a Tea Party-styled challenge from Russ Fulcher in 2014.

And voters also resoundingly rejected Priscilla Giddings, who was censured by the House of Representatives after she approvingly shared a far-right Redoubt News post identifying a rape victim and scoffing at her story. Giddings, despite facing a less populated field than McGeachin, still lost by nine percentage points.

They celebrated the loss of Dorothy Moon, a Freedom Foundation-beloved legislator who endorsed election conspiracy theories about immigrants — Canadian immigrants — voting illegally, who barely lost the race for secretary of state. (For that, they could personally thank state Sen. Mary Souza, who ended up serving as a spoiler in the secretary of state race.)

They also pointed to two figures best known for their armed confrontation with federal agents during the 2014 standoff at Cliven Bundy's ranch: Todd Engle fell short with 47.8 percent, facing off against North Idaho's deeply conservative Sage Dixon, who'd been painted as a swampy villain by far-right Redoubt News. And Eric Parker barely got more than a third of the votes for state Senator in his Hailey, Idaho, district.

Ron Winegar, a retired Boise deputy chief who was wounded in a firefight with militia-aligned extremists 25 years ago, similarly praised Idaho for being "a leader nationally in rejecting extremist candidates who embrace white nationalism and the militia movement over the rule of law and our republic."

So does this mean that Idaho is becoming a little less deep red? Have they rediscovered their inner Mitt Romney and are being driven into the arms of moderation?


Kootenai County voters drew a red line Tuesday. They do not support moderates.

Former Lt. Governor Jack Riggs and his wife, Sandy Patano, launched the "North Idaho Republicans" because they wanted to reclaim the mantle of traditional Republicanism for the region from the Kootenai County Republican Central Committee.

"They've got the megaphone, [but] we do not believe that they represent the majority of Republicans in this area," Riggs told the Inlander. "The only way we'll prove it is over the coming couple years to see who aligns with whom."

Riggs declined to draw a distinct policy contrast between his group and the official party apparatus, suggesting the objection was more about style and tactics than apologies.

It was notable, however, that, for example, there were no current elected officials as part of the group, with Riggs saying "we felt it best to not put anyone in the crosshairs."

The Inlander pressed Riggs on whether their tactics would be effective when faced with the bare-knuckled and relentless strategy of KCRCC. If you're playing by Queensberry rules, and the other guy's willing to kick you in the crotch, do you have a shot to win?

"I'm gonna say I don't necessarily have an answer," Riggs says. "Sometimes when someone is shouting and creating a ruckus, they'll get more attention but I'm not sure that's what the majority of people like."

But if North Idaho voters don't like the Kootenai County Republican's direction, they showed little sign of it yesterday. In many cases, the more moderate candidates were beaten — sometimes to smithereens — by the far-right picks. 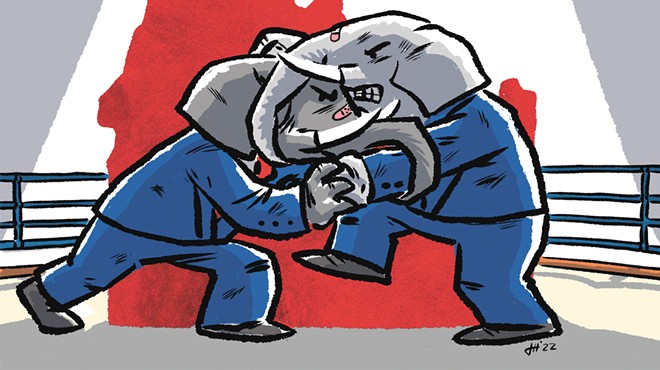 In fact, if you just look at the Kootenai County vote, McGeachin won by 15 percentage points and Giddings won by nearly 30 points. Sen. Jim Woodward in the top of the Panhandle was trounced by the more conservative Scott Herndon. 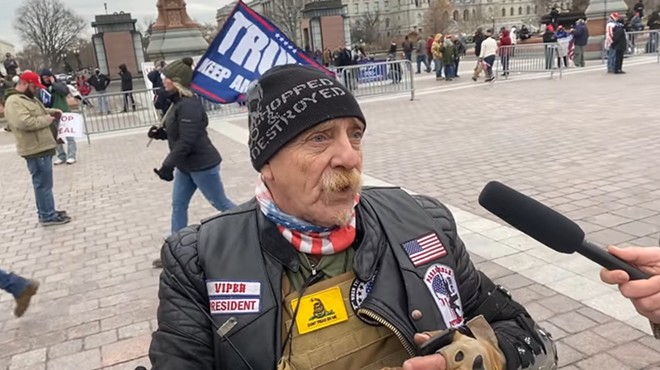 In 2022, Kootenai County Republicans raised over $500,000 more than any other party committee or political action committee across the state. Chair Brent Regan donated over $10,000 from his own pocketbook to the committee in the past two years, while his business, Regan Designs, shelled out another $10,000.

As the Inlander reported in a recent cover story, the far-right in North Idaho has an incredibly deep and widespread grassroots network of activists and alternative news outlets.

And then there's publications like the People's Pen, a far-right publication mailed out to homes across North Idaho that had to eight full-page ads paid for by the Kootenai County Republican party, savaging candidates like Amador and Peter Riggs ("DOES RIGGS SHARE GLOBALISTS' VISION FOR KOOTENAI COUNTY") at great length.

Parts of the Idaho right have long been frustrated with Wasden. You could hear that back in 2014, when he told Tea Party conservatives that, no, they couldn't just sue to take Idaho's federal lands back from the government. And you could hear it today, when the Kootenai County Republicans claim Wasden "threw away your vote when he refused to join 19 other Attorneys General to investigate election integrity."
(The conservative Supreme Court threw the case out for lack of standing.)

The far-right Idaho Freedom Foundation found plenty to celebrate in the results, too.

The Freedom Foundation, which once was a fairly libertarian organization (police reform with the ACLU! Weed!), has more recently taken a sharp turn into becoming the kind of anti-social justice culture war battalion that both grassroots donors and right-wing donors seem to love. In doing so, it's arguably become more influential — and in certain quarters — more despised.

Sen. Greg Chaney, representing a district east of Boise, called out the Freedom Foundation loudly and explicitly as "snake oil salesmen." After he sponsored a bill to make it illegal to
protest outside of personal homes of public officials, protesters showed up with torches and hanged a stuffed animal with his name on it. He lost by more than 7 points.

Yes I lost. But my integrity remains in tact. Can you even remember what that was like, Dustin? #idpol https://t.co/N0a5y0Aih7

But in the House, typically more friendly to the Freedom Foundation, you see the opposite trend.

Look at the five incumbents in the legislature with the highest 2022 Idaho Freedom Foundation "Freedom Index" scores who faced an opponent in the primary: Four — Chad Christensen, Karey Hanks, Gregory Ferch and Ron Nate — were ousted by voters. By contrast, of the bottom five Republicans facing opponents in a primary according to the Freedom Index, only Jim Patrick lost. And he lost by fewer than 40 votes.

With so many different districts, of course, it's hard to pick one trend to describe the entire Republican Party electorate. But, in some ways, it's pretty similar to the case outlined by Speaker of the House Scott Bedke, who fairly easily defeated Giddings to become the Republican lieutenant governor nominee.

"Idahoans do not want to be embarrassed by their lieutenant governor" or other leaders, Bedke argues.

Essentially, he believes that Idaho voters wanted to elect candidates who were deeply
conservative, but who were also pragmatic. They didn't want to see stunts and shenanigans, from their leaders.

So, voting for a sweeping anti-abortion bill? Pragmatic and conservative. Defending a rapist or speaking at a white nationalist conference? Embarrassing.

There is technically another Idaho election this year, a crossover event where Democrats (remember them?) are allowed to vote and everything. And Terri Pickens Manweiler, running as the Democratic nominee against Bedke, argues that, as Speaker of the House, Bedke bears some responsibility for the lurch to the extreme of his party.

"He had an opportunity to really put a stop to the right-wing shift in the House of Representatives. And what he did instead was, he went in his office, he closed the door, and he said, 'it too shall pass'," says Manweiler. "'And he was wrong. What he should have done is have a little courage, a little backbone and a lot of leadership."