The grasshoppers, beer and forefathers of an unexpected Shangri-La in Republic 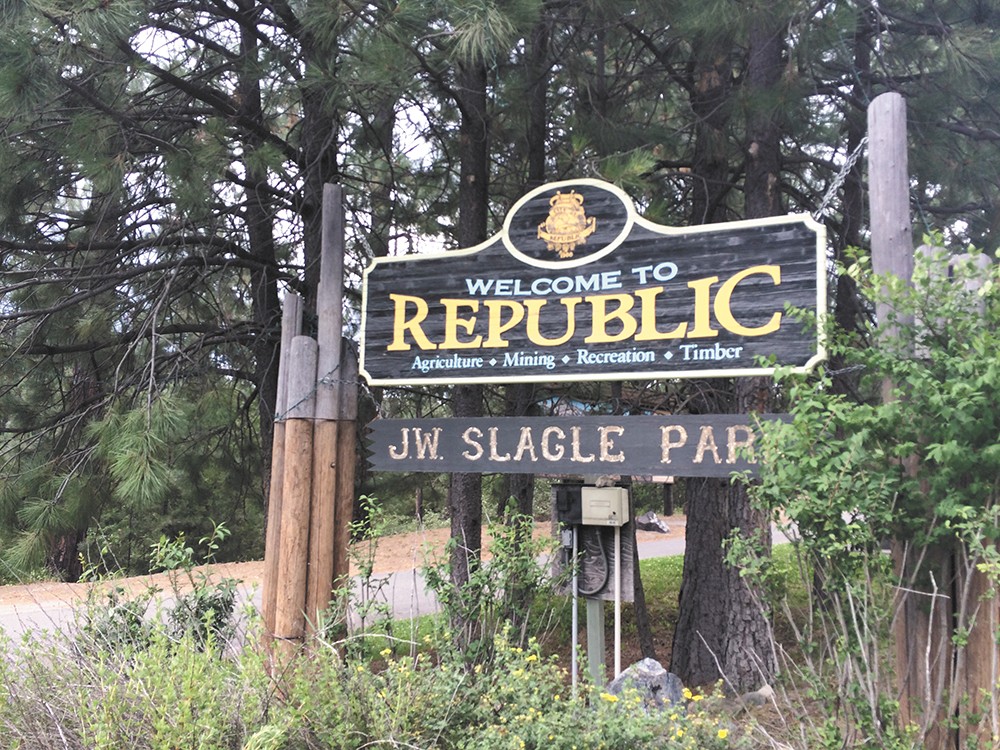 Republic is the county seat of Ferry County.

Republic, settled in the valley

between the Wauconda and Sherman passes in northeast Washington, is a place where the deer look both ways before crossing the street, and grasshoppers spring from the grass (the first-ever Grasshopper Festival was held here July 24 and 25).

Republic started as a tent city, just north of the present-day town, in 1896 when the U.S. government opened the northern part of the Colville Indian Reservation for gold mining. Overnight, it seemed, the area was flooded with men eager to stake their claim. Along with them came entrepreneurs who helped turn the canvas tents into a bona fide town.

The main corridor, Clark Avenue, still carries a frontier charm. No stop lights, a corner drug store and swinging, baby-blue saloon doors are just a few of those features.

Alongside them are 20- and 30-somethings snacking on the complimentary peanuts and sipping beers of their own. A few more are on the patio out back. All are greeted with an inquisitive look from Adiline, the cattle dog-turned-beer dog, who hopes they drop some food.

Emily Burt, co-owner of RBC with her husband, Billy, started the tiny brewing operation in 2011 after a jaunt across Europe for inspiration. The Flying Cloud Tripel, for example, is based on a beer they tried in Belgium.

"We brew a fairly traditional style, and it's all right here," Burt says, pointing to the two silver tanks next to the bar.

They make just enough to sell to one or two local restaurants, but otherwise you have to visit the taproom for a taste.

"It's totally revitalized the town," says Bob Whittaker, who owns the building. "There used to be tumbleweeds rolling down the street at 4 o'clock. Now loggers and miners are in there yuckin' it up alongside environmentalists. It's a real asset."

, the area of north-central Washington that Republic now occupies was completely under water. That lake has dried up and left behind a fossil bed that is home to the earliest known records of the Rosaceae (rose family), which include fossils of apple, plum, peach, apricot and hawthorn leaves, according to Travis Wellman, the operations manager at Stonerose Interpretive Center & Eocene Fossil Site.

Stonerose attracts about 7,000 people (approximately the population of Ferry County) to the tiny town per year to dig for fossils. Amateur archaeologists, who are allowed to keep three fossils each, might even discover a new species. An average of two new species are found each year, and are named after the people who find them. The most recent was a new species of stick bug discovered by a 14-year-old from Seattle, Wellman says.

As the story goes

, when Dick Slagle's father, J.W., first arrived in Republic in 1904, a man asked if the "J" stood for John. J.W. said yes, and that's how he was known from henceforth. But his name wasn't John, it was Jesse.

"That's one thing frontiers are useful for," says local historian Madilane Perry. "If you want to change, you can."

J.W. Slagle was sent to Republic by a Seattle-based pharmaceutical company to liquidate a drugstore that was part of an estate. He ended up buying the drugstore and its competitor, and combined the two into what is now Republic Drug Store. He married a schoolteacher and lived the rest of his life in the town of less than 1,000, raising his family.

When J.W. could no longer run the store, two of his sons took it over. One of them still lives in Republic.

As Dick Slagle stands in the kitchen of his boyhood home, a stone's throw from the corner drugstore he used to run, he says, "Welcome to the beginning of the 20th century."

Since his mother's death in 1969, the house and everything in it have remained undisturbed. From the giant Star Estate stove (circa 1900) that also acted as a water heater for the entire house, to the homemade Republic letterman's sweater on Dick's dresser to the clothes hanging in his parents' closet, the Slagle home is like a time capsule that gives visitors a look into middle-class life during the first half of the past century.

As a child, Dick says, he and his friends took the train to nearby Curlew Lake, about 10 miles north of town. It cost them 16 cents, and they usually didn't wait at a station. The conductor would pick them up along the tracks.

"It was kind of like Tom and Huck exploring the Mississippi," says Dick, now 96.

In 1937, he left for college at Washington State University (then Washington State College) and graduated in 1942, just in time for the draft. When he came back from the war, his dad was ready to retire and pass the drugstore on to his sons. The oldest, Maurice, was already working there, so Dick and his younger brother, Dave, flipped a coin. One would stay, and one would go. Dave won the right to the store, so Dick left for eight months to work in Cashmere, Washington, as a pharmacist. On a weekend trip home, the men realized the coin had misled them, so they switched.

Why did Dick Slagle want to come back?

"Well, I always felt like Ferry County, and especially Republic, was like Shangri-La. It's a paradise, and beside that, it's home." ♦

Bob Whittaker, owner of the Republic Brewing Company building, is the son of Jim Whittaker, the first American to climb Mount Everest