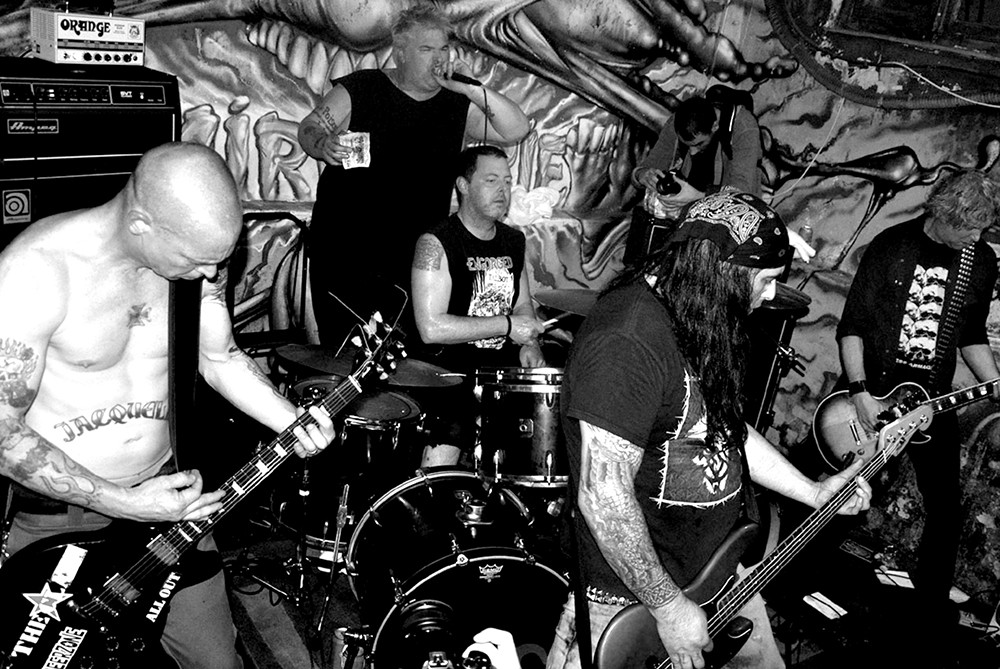 It's gotta be weird to have been there in the early days, when punks were reviled and feared, and have seen things come full circle — where you can step into any shopping mall in America, and you walk out a punk: purple hair dye, standard issue Ramones T-shirt, pre-safety-pinned and back-patched denim vests and rings and studs for whatever piercing you've got. That's the irony of shopping mall punks: they all look the same. And at punk rock's core is a tightly held belief of nonconformity. Punk is a way of thinking.

"Yeah, it is weird," says Jerry A. (aka Jerry Lang), the singer and only original member in Portland band Poison Idea. "It is weird."

When the group was founded in 1980, Lang says he could have never fathomed that punk would be as mainstream as it is today. But even still, that doesn't deter him. We got on the phone with the underground legend to talk about why he won't stop being punk — no matter what happens.

INLANDER: Alright, so it's 1980 and you want to start a punk band. Walk me through who you were and what you were going for when you started Poison Idea.

LANG: Sometimes it doesn't seem like [time has] changed and it is like a rubber band ... it doesn't really intertwine. We aren't living in the past — we're just living it over and over.

When we started, it was kind of a band of four 16-year-old Ramone-ish-type brothers who were best friends and all lived together and thought we were going to take over the world and be in a rock band. ... We actually did not know how to play. We didn't know how to tune our guitars. We didn't know what to do. We started off banging on pots and pans until we wrote our own songs and got better.

Are you surprised at where punk has gone?

There was a time when you really did believe there was no future. And that's why [we lived] the whole "Live fast, die young, go as fast as you can, and just get it over with as fast as you can because you were scared about tomorrow." I never would have thought it would have gotten co-opted by big business and the Gap or whatever.

So what do you do? How do you continue and not feel like your lifestyle and work has been spoiled?

At that point you just burn it down and start all over again. I don't want to get biblical and say it's like Jesus flipping over the tables in the temple. It's kind of like that.

... I don't know. It's f---ed. But the only reason I still do it right now, and get up, is just because I'm kind of a bastard and people tell me to stop. We played in Europe about a year ago, and I got an infection in my leg, and I had to have surgery. And people were going "Yeah, good, break up." I have some alcoholic tendencies in my body, and if you want me to do anything, just tell me I can't do it. Tell me to break up, and then I won't. But as soon as the band is going great, and we're doing good, then I'll probably give it up. At my leisure. When I think it's fine. I don't like people dancing on my grave.

Sometimes it's really great because there are young kids ... I can tell they get the same charge out of [our music]. ... And there's all sorts of people who are into it. [Punk] is the people's music. There're all these naysayers and stuff, that say punk rock is dead. ... I just say, look around the world. Look what's going on in the world with the people finally taking back what's theirs, and smashing these governments that have been oppressing them so long. What's going to be the soundtrack to that? It's not going to be Garth Brooks. It's gonna be punk rock. That's the music of aggression and that's the music of revolution. And I dig that. I like flying that flag.

And you're still touring, still putting out new music — do you ever get tired of doing it yourself?

There's that saying, if you want something done right, you have to do it yourself. ... We have really nobody helping us.

We were working with a person ... they liked it because we play 45 shows in a row and we make them a lot of money, and they don't have to do nothing. We just got sick of doing these huge festivals and huge tours, and getting back and me going right into the hospital, and me getting half my foot cut off. And then them going, "You owe us $10,000 because of some bullshit." We'll keep going until the time is right. And we're doing it ourselves and we're making a lot of records. This next month, April, we have, like, three records coming out.

We're really putting it into overdrive. Kind of like, the sun shines brightest right before it burns out. I think that's what we're doing right now. We're burning bright. ♦