How a former graffiti-tagging gang member is fighting spray paint with spray paint. 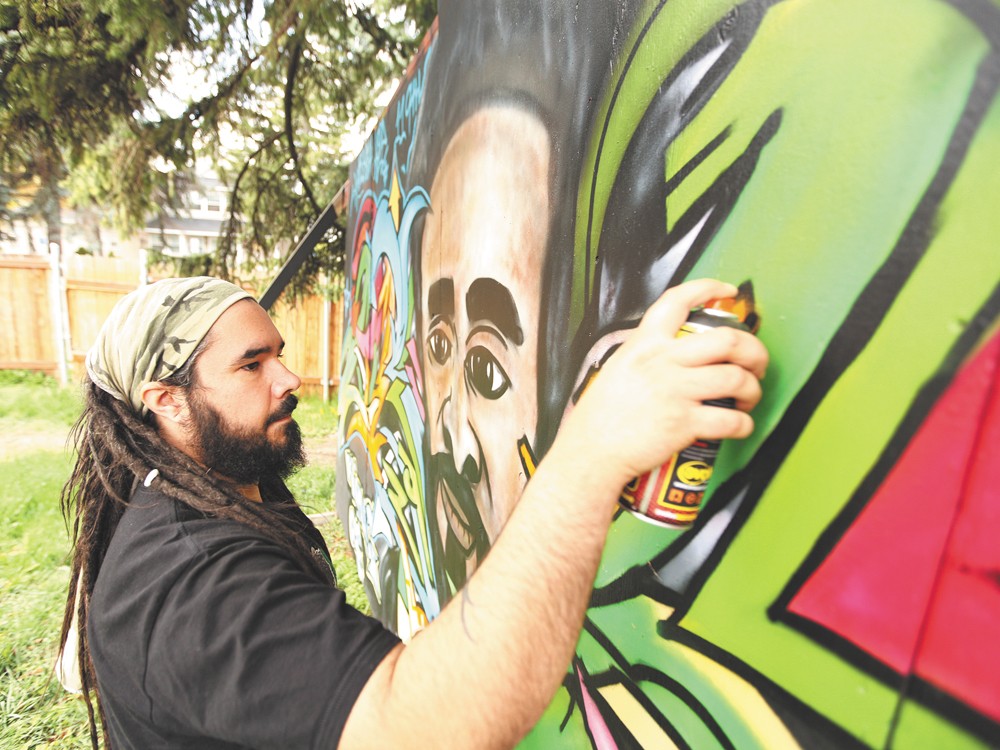 Young Kwak
Justo Luis Rodriguez, founder of Upful Creations, works on a mural in his back yard.
alive.

Justo Luis Rodriguez has a scar from a bullet wound on his left hand. On his right hand, a series of scars from knife wounds is etched across his skin.

Rodriguez once belonged to a gang he wishes not to name. He hopes to keep details of those days blurry.

The 32-year-old Rastafarian is wearing Birkenstocks.

Tattoos swirl across his arms and legs. Hints of silver hair frame his bearded face and thread into the long dreadlocks he manages with a camouflage handkerchief.

The Washington transplant is fighting to fix Spokane’s graffiti landscape with his business, Upful Creations, which paints murals over commercial and residential spaces that have been vandalized.

It’s a stark contrast from his past. Rodriguez was born to Cuban parents and raised in the “ghettos” of Florida. He was bussed out of his neighborhood to attend magnet schools, but nothing could shield him from the battleground in which he lived.

“My mom died when I was 12,” Rodriguez says. “She always told me not to get someone pregnant and not to get into gangs. Unfortunately, I couldn’t stay away from [gangs].”

Rodriguez wandered the streets. He traveled in a pack of boys and illegally painted buildings.

“Back then we had rules,” he says. “No mom-and-pop shops, no schools, no churches, but you can paint on government buildings and abandoned places. We figured we were taxpayers, and we could add a layer of paint if we wanted to.”

They ran from the cops. They took care of each other until they reached an age when the lure of gang activity became too strong.

“It was either belong to something or get beat,” Rodriguez says. “Graffiti got me into the gang, because I could paint, but it also saved my life. The only reason I’m here and alive or not in jail is because a cop believed in me.”

Rodriguez was arrested multiple times during his youth and young adulthood. Eventually, he was placed in a Stop The Violence Program. He traveled to schools, teaching that gangs are not the answer, and that graffiti is illegal, but that art can set you free.

Today, with Upful Creations, he paints murals on buildings that have been plagued with graffiti in an attempt to shed a positive light on urban street art.

“I’m trying to show kids that positive things can be cool,” he says. “People think graffiti should always be illegal, but I’m trying to pave the way for something different.”

Rodriguez doesn’t have to look far in Spokane to find potential clients.

Graffiti is everywhere downtown. Look at the Crescent Warehouse building on Lincoln and Monroe streets — the most heavily tagged building in Spokane.

Green mold blemishes its mostly empty remains. Burnt-red bricks crumble to the ground from the railroad tracks above. The road below was once dirt but is now all but covered by broken glass.

In 2004, Spokane Community Oriented Policing (C.O.P.S) estimated that graffiti artists had caused $70,000 in property damage in the city. In 2007, that number increased to $100,000. The amount today, C.O.P.S. representatives and members of the Downtown Spokane Partnership (DSP) say, is too staggering to calculate.

The Downtown Spokane Partnership manages graffiti on the 80 blocks of the Business Improvement District, an area that stretches from Maple to Browne between Railroad Viaduct and North River Drive. They remove an average of 3,000 pieces of graffiti each year.

In March, police arrested Lance Perkins, a prolific graffiti tagger known for painting “57” across town. He alone is believed to have caused more than $50,000 worth of damage throughout the city. According to the DSP, Perkins recently caused $6,000 worth of damage to the Fox Theater.

In response to the rise in graffiti, the Spokane City Council in 2008 passed an ordinance that made defacing property a gross misdemeanor, which carries a maximum penalty of 90 days in jail and a $1,000 fine.

The ordinance also gives property owners 10 days to clean up graffiti on their premises. Those who don’t can face non-compliance fines of $513, can have their buildings declared a nuisance, and can even be taken to court, where a judge could order the owner to take action. Failure to do so at this point could result in the city fixing the problem at the owner’s expense.

Rodriguez says that businesses hit with graffiti will commission a mural because “murals are respected and mostly protected from tagging.”

Eric Walker, with C.O.P.S., receives graffiti notices from several local agencies and organizations. He photographs and catalogues prolific taggers or gang-related activity and sends the information to the police. He agrees with Rodriguez’s philosophy.

“Graffiti removal is a constant overwhelming task, but things have gotten better since the ordinance,” Walker says.

Approximately 90 percent of Spokane’s graffiti is tagging, he says, referring to the basic, one-color scribbles and signatures that cover bridges, abandoned buildings and parks.

The other 10 percent, he says, is gang-related vandalism meant to mark territory, he says.

“The biggest misconception about graffiti is that it’s all done by kids or gang bangers when, in reality, you’re looking at 18-to-24 year-old-males who are very hard to catch.”

Rodriguez takes pride in covering up illegal activity. He enjoys doing something positive with an art form that is traditionally seen as being negative.

A Buddha tapestry hangs on the front door of the home Rodriguez shares with his wife and two children. The stay-at-home-dad and entrepreneur moved to Spokane in 2007. He practices on a plywood wall in his yard and has a studio in the basement.

The graffiti wall boasts a portrait of Haile Selassie — former emperor of Ethiopia and prophet in the Rastafari movement — surrounded by jungle. The studio is a flurry of monkey sketches, spray-painted tags and canvas paintings of, among other things, skeleton babies in diapers.

Upon completing the Stop The Violence Program, Rodriguez attended the New World School of the Arts in Miami and then the University of Florida, where he earned a Bachelor of Fine Arts degree in painting, with an emphasis in illustration. He founded Upful Creations in college.

“Every day you walk down the street, you see billboards or ‘Vote for Ron Paul’ signs,” he says. “Companies pay thousands of dollars to advertise to us, to feed us mass information, and I just want to feed beauty to people.”

“My art led me away from all the negativity and the ghetto,” he says. “Because of which I want my business and art to create a positive light in my community."

DIY and then some: Spokane Zine Fest brings unique, limited-run art publications to the public