Inside Eyvind, the next project from Ruins' chef-owner Tony Brown 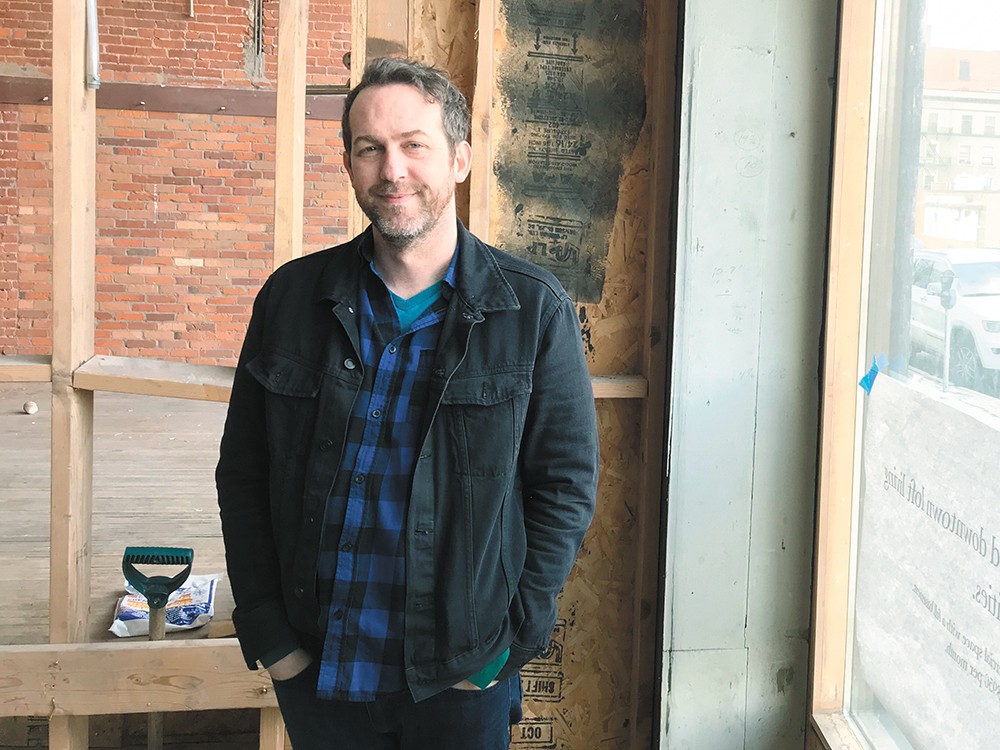 The space is raw, dusty and cold

— it doesn't yet have electricity — yet as chef Tony Brown walks through what will eventually become his swank new downtown restaurant, he excitedly explains where everything goes. There, upfront by the floor-to-ceiling windows, will be the main dining room, with 28 seats. Along the side, running deeper into the space, will be a reclaimed 19-foot-long bar, leading eventually to the kitchen, which Brown hopes to keep visible to diners.

"I still have to talk with the fire marshall, but my goal is to enclose it in glass," Brown explains during a tour of the 1,800-square-foot, first-floor space inside the Bickett building at 225 W. Riverside.

The restaurant's name, Eyvind, is a nod to Eyvind Earles, an American artist noted for his background illustrations in 1950s-era Disney films. But don't expect any Sleeping Beauty murals inside the restaurant, set to open this spring.

"Eyvind Earles' art is mysterious, abstract, super-precise," the 41-year-old Brown says. "It has a level of virtuosity without being stuffy because the subject matter is simple, yet elegant. Everything I think a restaurant should be."

Brown himself is best known as the chef and owner of Ruins, a small place on North Monroe Street, in the shadow of the county courthouse. Ruins' name was in part inspired by the condition of the building when Brown opened for business in 2014, but since then, it's become renowned for its innovative and ever-changing small-plates menu. At one point, Brown was switching the featured cuisine each week, serving everything from Thai to Russian to Filipino and Phoenician.

It's earned him a solid following among foodies in the region. Indeed, when Seattle's hipster publication the Stranger sent writers to explore Spokane, they had "planned to go to what is supposed to be the city's best restaurant, Ruins." (They ended up leaving without eating because there was a wait.)

But despite his rising-star status, Brown eschews the pomp and pretension that often surrounds food culture.

"The idea of a celebrity chef, I think, is completely ridiculous," Brown says, laughing at the cheffy hashtag #truecooks and the associated (though totally impractical) line of apparel. "That stuff to me is just bullshit. ... Maybe I'm selling myself short, but my job is to cook for people, and they give me money."

His no-bullshit perspective has been shaped by an unusual journey to this point. Born in Eugene, Oregon, he was raised inside the conservative Worldwide Church of God, described by some as a "doomsday cult," and he left home at 15 (after his family had moved to Spokane). He dropped out of high school a year later, got his GED, started at Spokane Falls Community College and found himself working in kitchens. He later got married and moved to Chicago, where he continued cooking and studied architecture at the Illinois Institute of Technology. They had a daughter, moved back home to Spokane and promptly got divorced, Brown says.

With Eyvind, Brown sees a blank slate, a do-over of sorts, a chance to fix the mistakes he made with Ruins and Stella's, the beloved sandwich shop he closed last year — from the setup of a kitchen to price points and hiring. (He's already made one new rule: no hiring friends.) Eyvind's food will be like Ruins', but a bit more refined, he says, and the space — it'll be just as he imagined, everything in its rightful place.